Home Travel Corrientes Toropí: a giant from the north

Welcome to Toropí. A fossil reserve that turned the city of Bella Vista (Corrientes) into much more than oranges and fishing. 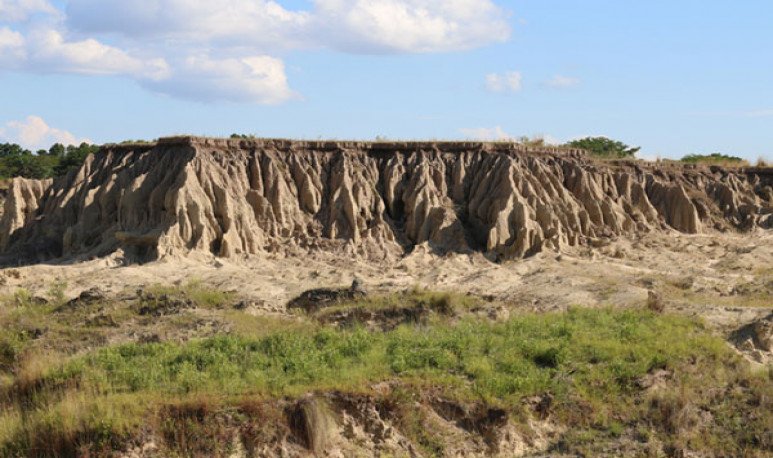 One hundred and fifty kilometers  separate it from the capital of Correntina  . The   Toropí   Site is gradually  transforming  the town of  Bella Vista  into a  gem    cultural. It is that the findings on its soil make it a  unique heritage  in  South America  . We are talking about  archaeological records  of more than  40 species  of  animals  that were once  huge mammals  .

In turn, they are visible witnesses that there once existed a time with similar living beings. In this way,  paleontologists from all over the world  reach the huge carcava to confirm it. This is an  exceptional map  that allows to  reconstruct the evolution  and disappearance of prehistoric fauna in this area of the continent.

Investigations  on site started  40 years  ago. However,  the first studies were published in early 2000  . Under this line, the laboratories of the  Centre for Applied Ecology del Litoral (Cecoal) , also located in  Corrientes , perform a  fundamental task . It is that within the institution around  10 thousand pieces  corresponding to the discovered species are sheltered.

These are studied by  scientists  from all over  Argentina, Brazil, Uruguay, the United States and Spain  . In fact, researchers involved argue that the advances made were thanks to the contributions of  science  that is constantly being renewed. Also, the exchange of information with professionals from all over the world. But the path of the reserve's potential is just starting.

The  reserve  was declared provincial  Paleontological Heritage  by law because of its relevance. When we say it's a  carcava , we mean  depression . It covers between  four and five kilometers long and one wide  up to the  Paraná River  . However, when it rains there is a great erosion that causes its increase in size. It should be noted that one of the most  striking   elements  of the site is its  unlikelihood  of finding a whole animal. On the contrary, they are usually disjointed. This happens because  of the growing tributary , which with water separated part of the skeleton. An aspect that  differentiates  it from others of its kind, where the burial of fossils is commonly given by the wind.

On the other hand, the animals that inhabited this region did so more than  30 thousand years ago, during the  Pleistocene . This was the last time of the Quaternary period of the Cenozoic era, which precedes the Holocene. That is, the final stage in which the history of the earth is divided and extending to the present day. Under this line, there were mastodons of more than 4 tons and glyptodontes, which were huge armadillos up to 800 kilos. Also, remains of land sloths exceeding 700 kilos and giant turtles were located. The latter were similar in size to those we can see in the Galapagos Islands, in Ecuador.

But it doesn't end here

A few years ago the   Paleo museum Toropí  was inaugurated, which allowed Bellavistenses to begin to live the experience fully. Here,  collections  belonging to the  National University of the Northeast (UNNE)  are exhibited, made up of the findings of countless researchers since the 1970s. It also envisages the  creation of a geopark and an interpretation centre , among other projects aimed at encouraging this natural resource.  Now you know: it's time to go out and play adventures on your next family vacation .