San Telmo is undoubtedly one of the most magical neighborhoods in the city, and houses a small treasure: a small house that invites you to know the history of the liberated slaves of the 1800s. 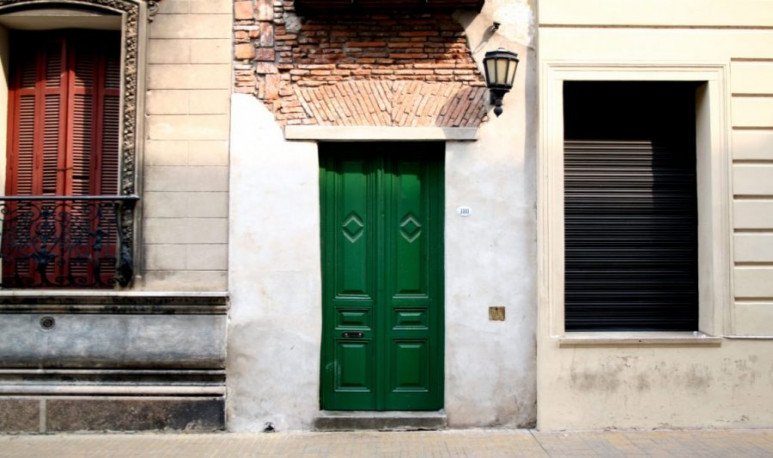 Buenos Aires is full of corners, small details, wonders hidden from everyone's sight.  San Telmo  is undoubtedly one of the most magical neighborhoods in the city, and houses a small treasure:  Casa Mínima.

Located in the neighborhood of San Telmo, on Pasaje San Lorenzo 380 — in an environment where the cobblestone regulates the speed of the few cars passing and transforms that block into an oasis of silence — the particular thing about this house is that it has the narrowest facade of the city: its front is only two and a half meters wide by 13 meters deep.

Its front stands out among the buildings that surround it, not only for its dimensions, but for its design that seems stopped in time. A high door with two leaves, green and tall, antique style. From the top there is a balcony with iron bars and a large two-leaf window. The passage of time is noticeable on the white walls that in certain sectors it lacks plastering and shows the brick in sight. A lantern to the right of the door completes the postcard that takes us to Buenos Aires 1800.

Its construction dates from the beginning of the nineteenth century and is a residual space that remained after the successive building reforms that suffered the block. The building went through several owners and there were various conventillos. According to historical cadastre papers, the land, in principle, had occupied 16 meters from front by 17 meters deep. That is the formal story, after successive divisions to sell and continue building remained, like loss in the block, this minimal house.

The myth, meanwhile, says that it was the house of a liberto slave, to whom his master had given that space to build his home. They say he was nothing more and nothing less than a free slave of  Urquiza .

At that time, in  1813 , after freedom of bellies was declared, the children of slaves born after the law was proclaimed were free. This posed some challenges since until 1853, when slavery was abolished in our country there were Afro-descendant families where parents were slaves but their children were free citizens who did not get fixed jobs and they were enrolled in the army to have some opportunity to progress. Many slaves of that time, in the face of the sudden freedom they enjoyed, had to manage to get their own home. On many occasions, their former owners provided them with small land to use for this purpose, in gratitude for the services provided. Spaces for which data are almost not kept because at the death of the liberto who received the house as compensation, the land returned to its original owner or the heirs who were alive.

Legend  has it that this was the case of the house that is today in Pasaje San Lorenzo: A gift from a grateful master to facilitate the recent freedom of his servant.

It is not known for sure whether this was so, which makes it even more wonderful. It remains in our imagination, then, to believe what was the initial purpose of this little house; to close our eyes and visualize a Buenos Aires in the 1800, where — with that bit of apple — a slave knew, for the first time, what freedom was. What are you waiting for to get close to know that part of our history?

Photo: Courtesy Entity of Tourism of the City of Buenos Aires:  travel.buenosaires.gob.ar