The Metropolitan Cathedral of Buenos Aires is possessed of these two treasures that you should know. 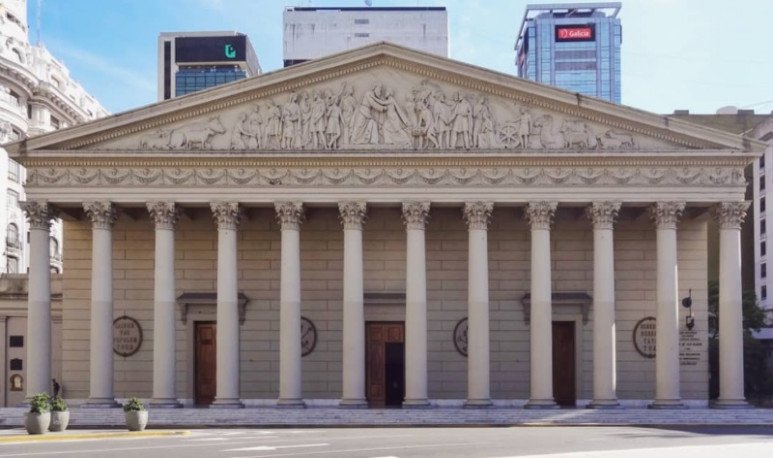 The headline chapels of the  Metropolitan Cathedral  are performed in the second half of the 18th century. In architecture, the testero, a word derived from the Latin testa (head), serves to designate the wall opposite the main entrance. On the other hand, in the case of temples, it refers to the headboard (opposite to the imfronte).

In May 1752 a good part of the Buenos Aires Cathedral building fell apart. However, the Ecclesiastical Council approved its reconstruction only in 1755. Domingo Basavilbaso, a merchant, was appointed to handle the works funds. The work was commissioned to the Saboyan architect Antonio Masella. Apparently the materials used by Masella were not suitable. That was how in 1770 cracks were detected in the dome that forced to remake it. Ten years later he began to equip it with the new altarpieces.

During the 3s. Days of the J. Payró Institute at the Faculty of Philosophy and Letters in Buenos Aires, Professor Ricardo González said:  “The headlamps of the lateral naves show the ecclesiastical institution and the representation of the elite of civil society ascribed as tertiaries of the secular clergy. This statement is based, for example, on the fact that the altar of Saint Peter was in charge of the congregation of secular priests led by the Ecclesiastical Cabildo.  On the other side, the altar of Our Lady of Sorrows belonged to a brotherhood founded in 1750. It was dedicated to the salvation of the souls of purgatory.

The altarpiece of San Pedro

No documentation for the San Pedro altarpiece has been kept to know its authorship. However, scholars of the subject state that, for its details, it is Juan Antonio Gaspar Hernández. This cabinetmaker did many works in the temples of Buenos Aires. Hence, certain references are typical of his style. Corresponds to the type of unique niche. It has a single street with side columns. It is topped by an attic and its pediment is classicist. The composition is what Hernández's authorship calls to affirm. This is Corinthian columns, like framing the niche. Also two pilasters decorated with cloths that fall on the arch of the niche held by cherubim. 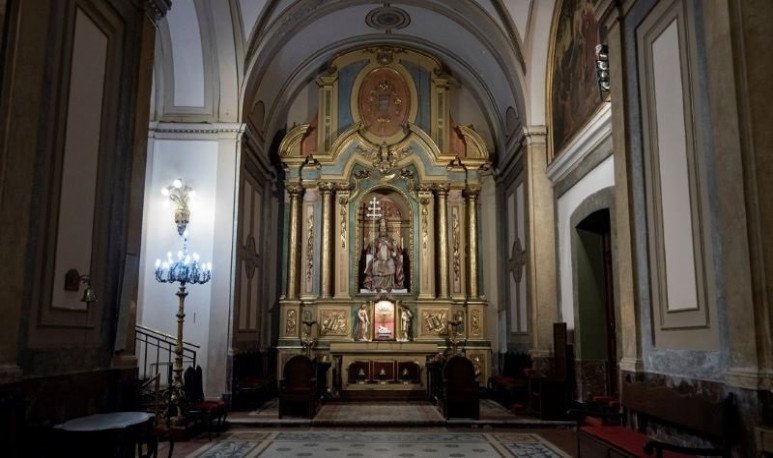 In the main niche you see the Apostle. He shows him as Supreme Pontiff. The split pediment shows the papal emblem. In the attic an oculus with a gusset. The bank presents symbolic motives relating to Christ and the Church. Also the virtues of Fortress and Wisdom. In addition, the symbols of the ecclesiastical institution and the Eucharist, of the Church and liturgical worship. The abundance of nautical elements in the botabanco is understood as an appeal to the Church Nave, led by Christ. One could add, as a synthesis of the theme of the altarpiece, the papal emblem located on the eardrum. Symbol of the maximum dignity of the Catholic Church represented first of all by the titular apostle. The small niche of the bank and the image it contains are modern aggregates.

The altarpiece of Our Lady of Sorrows

As we said the altar of Our Lady of Dolores, which is located in the Metropolitan Cathedral of Buenos Aires, belonged to a brotherhood founded in 1750. The brotherhood was dedicated to the salvation of the souls of purgatory. It grouped characters from the Spanish elite of the city. Among them Mateo Ramón de Alzaga, Gerónimo Matorras, Juan de Lezica, Domingo Basavilbaso, Antonio José de Escalada, Miguel de Riglos and Manuel Rodriguez de la Vega. All major traders who were engaged in smuggling products from Castile. It should be remembered that direct trade with Spain was prohibited. All the merchandise had to come from Upper Peru. That made costs expensive and justified smuggling. This brotherhood was constituted as their peers in the Metropolis. So it was established as the third order of Servitas, thus hierarchizing his canonical status. 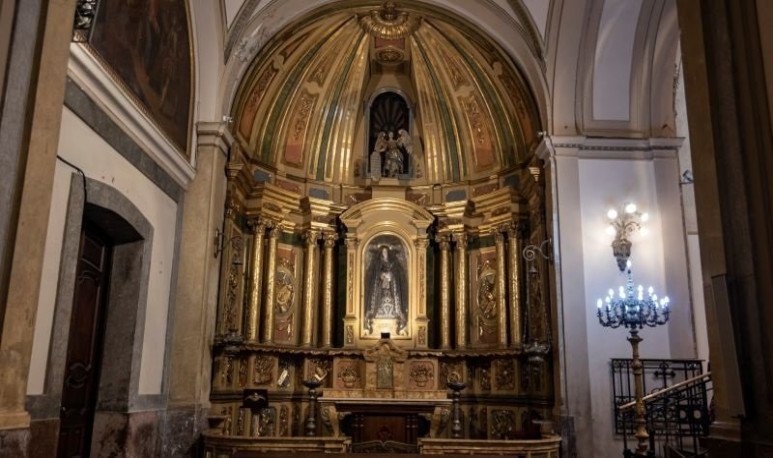 The altarpiece of Nuestra Señora de los Dolores possesses the image of La Dolorosa donated by the aforementioned Matorras in 1756. Since it was not rebuilt, the Cathedral was placed provisionally in the church of St. Ignatius, a few blocks away. Domingo Basavilbaso, who, as mentioned, was in charge of the management of the works in the main temple, decides to build that altarpiece. In an act of the brotherhood it reads: “Our Elder Brother stated that it was necessary to deal with the new altarpiece q. for the placement of Na. Madre Dolorosa was to be done in the chapel of the new major church. ” (N. DeLa.: the original writing of the paragraph was respected). Only in 1787 it was decided to make the commission specifically, in view of the fact that the building of the Cathedral was coming to an end. The design is requested from Valladolid carving artist Juan Antonio Gaspar Hernández. This one had ordered $1700 but offered some rebate. It opened the possibility of studying  “with some other intelligent”  certain modifications  “in what without varying the substance of the design could be refereed”  .

The design made by Hernández was novel in the city. With its composition based on the niche as the center of a hemicycle and an absidal vault as auction. It presents a unique niche at the express request of the brothers'. Secondly, the apse-shaped design with the vault closing it on top. It is a classic Castilian Baroque model. Finally, it is also particularly striking the link between the selected iconography with the stories of the circumstances of the Passion surrounding the very figure of the headline.