We remember the first Santa of America, telling her story 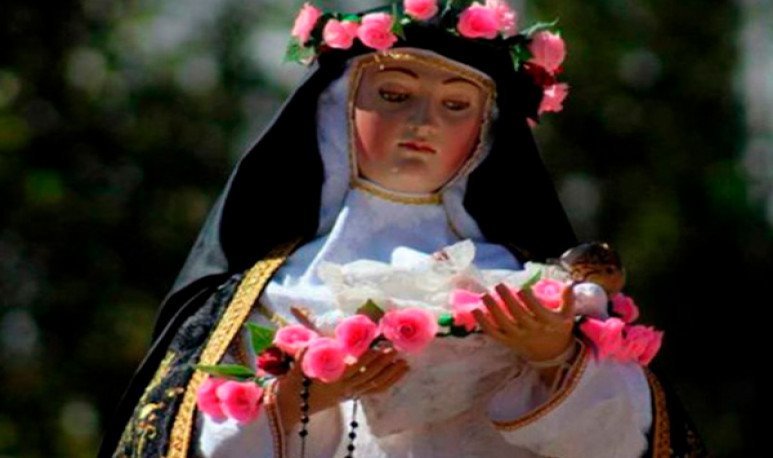 The fervor to Santa Rosa de Lima is a tradition that has been in Peru for centuries. Isabel Flores de Oliva, real name of the first saint of America, was born in Lima in 1586 and stood out for her humility, acts of charity and shows of penance.

She began to be called Rosa by her mother because of her blushed face and beauty. In his childhood he lived in the village of Quives as his father assumed the post of administrator of a work in the Sierra de Lima.

History tells that on August 30, 1615, in the archbishop of the port of El Callao, he ordered that prayers be prayed in the temples to prevent Dutch corsairs from disembarking and looting the city.

While the priests armed themselves to repel the invasion, in the chapel of San Geronimo, of the church Nuestra Señora del Rosario in Lima, a young woman prayed begging that a storm would come, and thus avoid landing. That day the storm was huge, so there were even blasting roofs. Surprised everyone attributed the storm to the prayers of the young woman

Santa Rosa was not religious but secular, her father forbade her to use Dominican habits. His life was dedicated to God, but at home. He wore a white robe and black mantle looking to imitate Saint Catherine of Siena, tertiary of the Dominican order.

Isabel Flores de Oliva died at the age of 31 on August 24, 1617. He spent his last days helping Gonzalo de Massa and his wife, who was very fond of him.

Before his death, various testimonies of his life and miracles were collected. In 1634 the cause of his beatification was presented in Rome, which occurred in 1668 in the Dominican Convent of Santa Sabina.

Santa Rosa de Lima holds the title of  “patron saint of Peru, the New World and the Philippines”.  In the Asian country she is known as  “Santa Rosa Laguna”  and revered for her appearances during the Japanese occupation in World War II.

His canonization takes place in 1671, does Pope Clement X. Rosa became the first saint of America. Her devotion crosses borders: in Peru she is patron of the National Police, nurses and miners; while in Argentina and Paraguay she is patroness of the Armed Forces.

In the city of Buenos Aires, on avenue Belgrano and Pasco in the Barrio de Balvanera. The Basilica Santa Rosa de Lima, has an unusual beauty outside. Located in Belgrano and Pasco. If you look at it in perspective, it has some resemblance to the Sacré-Coeur church in Montmartre (Paris). Its interior is as beautiful as what we see outside.

And, like the Basilica of the Blessed Sacrament, it has a crypt of the same size and architectural style as the temple. He's got his entry down Pasco Street. In religious symbolism, like Maria Auxiliadora in Almagro, corresponds to the penitents.

It is square in plan. With two octagonal rings of columns that are below those found in the main temple. They are also marble, but pink. The apartment is ivory.

The main altar is carved in Carrara marble with gold foil appliques and has an exact replica of Michelangelo's sculptural group La Piedad, located in the Vatican.

The crypt is the resting place of the temple benefactor Maria de los Remedios Unzué, who died in 1950 and was transferred to the Basilica in 1955 along with the remains of her husband Angel Torcuato de Alvear (brother of the President of the Republic Marcelo Torcuato) who died in Paris in 1905.

There is also a minor altar dedicated to Saint Theresa of the Child Jesus and the first image that the temple had of the Sacred Heart. Every 30 August thousands of people visit the sanctuary of Santa Rosa de Lima

Patronage of Santa Rosa in Argentina

Santa Rosa, Capital of the province of La Pampa. Chajarí in Entre Ríos next to Villaguay. Bragado, Buenos Aires Province. In Cordoba she is the patron saint of Las Vertientes. Colonia Santa Rosa in Salta and the city of Santa Rosa del Conlara in San Luis.