They launch the Tourism program in Barrios porteños, with 48 circuits and more than 500 attractions. 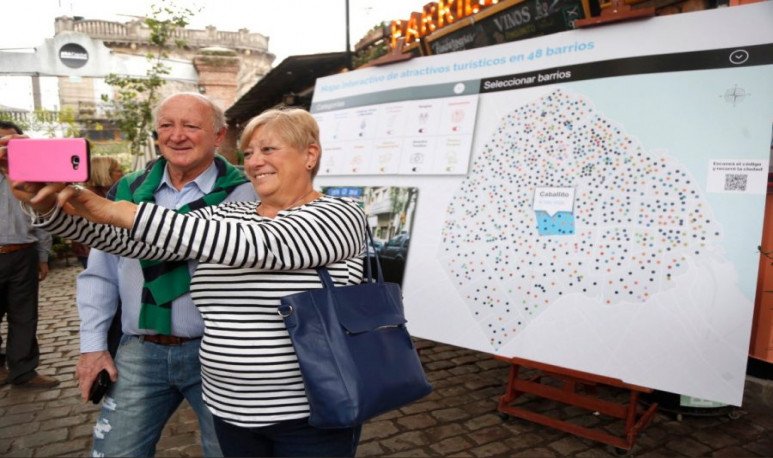 The Tourism in Barrios program involves 48 circuits and more than 500 attractions. The intention is to encourage this activity in non-traditional places in the City of Buenos Aires for visitors. The program was launched with the inauguration of a participatory mural and an interactive map, in the Patio de los Lecheros in the neighborhood of Caballito.

The launch was led by head of local government, Horacio Rodríguez Larreta. He was accompanied by the president of the Buenos Aires Tourism Ente, Gonzalo Robredo. He said that this initiative is part of the plan to reach the historic record of 3,000,000 tourists this year.

The event was held with the presence of numerous neighbors. In the premises of the old train station the production of the drums from the interior of the country was received to be sold to the Buenos Aires neighbors. Today it is converted into a patio of food, entertainment and artistic numbers.

On the original brick front of the Patio -on Avenida Donato Álvarez - a team of muralists headed by Martín Ron captured an image of the Historic Tram that is symbol of Caballito. It includes in the base a hundred mosaics with the reproduction of almost 2,500 photos supplied by neighbors of the neighborhood.

Those photos were donated by 215 people. In them people expose the attractions of the area according to their point of view. Although, in this case, some put their own photos or of pets, friends and family.

Inside the Patio de los Lecheros there was a gigantography of three meters by two with a map of the city and its 48 neighborhoods. This allows you to navigate the circuits after scanning a QR code, next to which many photos were taken.

These works will be replicated in 48 circuits. About them, the Secretary General of Government and International Relations of the City, Fernando Straface, said that “the most beautiful effect of the murals is to see the neighbors identifying themselves in one of the mosaics. Because they are the identity of every neighborhood.”

Rodríguez Larreta explained that this initiative is developed “with the aim that the tourist attraction is distributed throughout the City.” He stressed that tourism “generates work in hotels, restaurants and entertainment”, among other items.

Robredo said the intention is “that tourism and visitors reach all neighborhoods. But not only with what it implies in economic development and what they can spend on shopping, gastronomy, etc. But to generate a meeting between the traveler and the local, which enriches a lot and is a very transformative experience.”

“Buenos Aires is a destination that is usually combined with other natural destinations in Argentina or the region, for local and international. We're looking for it not to be a passing destination for a couple of nights, but that they stay longer. To know the neighborhoods.”

On the movement in the city, he said: “In the first quarter we had a year-on-year growth of 18%. With which we hope to overcome three million international tourists this year. This would be a historic record, because we already equaled the 2011 historic record in the City.”

Last year, the City of Buenos Aires received 2.7 million tourists. In the first three months of this year 580,000 visitors entered. This represented the increase mentioned and generated expectations for a new historical record.

New refuge for Active Tourism in the Calchaquíes Tucumanos Valleys

The tenth edition of Iguazú arrives in concert

On June 15, the whale watching season begins in Península Valdés

Molino Forclaz: travel to the past

Salinas del Diamante: where the sky is reflected on earth

Carpentry, the capital of free flight