Torrecillas Glacier is located in a transitional area between the Patagonian Andean Forest and the Valdivian jungle. We tell you why everyone who visits him falls in love with him. 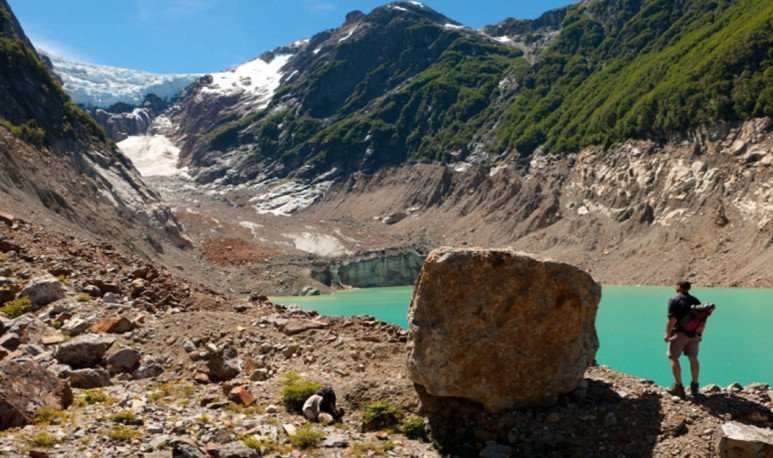 Survivor of the last glaciation and bearer of 24 thousand years of majestic existence, the  Torrecillas Glacier , imposing white, concave stands like a circus tent, hanging from the mountains. Around it, the multicolored immensity of  Los Alerces National Park expands, protected as a world heritage site for three years. About 60 kilometers to the southeast, the city of Esquel is its most important urban reference.

At the top of the hanging glacier, detachments form a regenerated snowdrift or glacier, from which the glacial formation lagoon is delineated 50 meters deep and one kilometer long. This water mirror, with turquoise encandilant, grows year after year while the glacier recedes.

On a mountain of 2253 meters, one of the highest in Los Alerces National Park, the Torrecillas glacier unfolds like a white, icy mantle that crosses the clouds. Having its face to the south, it receives less sunlight and that is why its formation is preserved. From the lake, it moves the image of an immense front wall of almost 200 meters, of white spotting at the top, contaminated with green pointed as it approaches the base. Somehow, the glacier is the great artist of all the landscapes that escort it.

The transfer to the place involves, in normal times, long hours of transfers between vehicles, hikes and sailing. As a reward, a cluster of unheard postcards moves year after year both tourists arriving from distant horizons and inhabitants of the region, who do not know this rough diamond that lives as a millennial neighbor.

The  Argentine Institute of Nivology, Glaciology and Environmental Sciences  (IANIGLA), an executive unit dependent on CONICET, defines the glacier as  “a permanent body of ice and snow, which has been formed by the accumulation, compaction and recrystallization of snow accumulated in the winter and that does not manage to melt in the following summer.”   As formations that depend on precipitation and temperature, they are considered to be good indicators of climate change.

Glacier ice is formed from the accumulation of successive snowfalls. As the thickness increases, the compaction caused by the snow's own weight, plus the melting and refreezing of the crystals, are transformed the snow, which loses porosity and gains density.

The preservation of the Torrecillas Glacier and all the glaciers of the country is contemplated since 2010 by  National Law 26639 on the Minimum Budget Regime  for the Preservation of Glaciers and the Periglacial Environment. This standard recognizes them as  “strategic reserves of water resources for human consumption; for agriculture and as water suppliers for the recharge of watersheds; also for the protection of biodiversity; as a source of scientific information and as a tourist attraction. iacute; stick'.

One of the requirements of this National Law was the implementation of the National Glacier Inventory, a task entrusted to IANIGLA, which allowed the survey of more than 560,000 square kilometers in the Andes and the South Atlantic Islands. This Inventory allowed us to know that there are about 17 thousand existing ice bodies in Argentina that occupy more than eight thousand square kilometers. It also provided elements of study that allow to complement glaciological history with the environmental history of our country.

Due to its geographical location and the historical information and availability of other existing records,  Torrecillas Glacier  was chosen to be studied within the framework of this mapping. Photographs from 1899 and 1937, coupled with more recent aerial shots, allowed to notice modifications that were generated over time.

Among other attributes, it is recognized that mountain range glaciers are  “strategic reserves”  of water for the adjacent lowlands and much of the country's wasted diagonal. iacute; a, collaborating with the task of minimizing the impact of droughts on socio-economic activities. It should be noted that, in the world, the reserve of 75 percent of fresh water is in solid state; precisely, in glaciers.

Torrecillas Glacier is located in a transitional zone between the Patagonian Andean Forest and the Valdivian jungle, where landscape diversity mutates with the seasons, offering unspeakable postcards of majestic and dynamic beauty.

Forest tree species such as tineo coexist with other characteristics of the Andean forest such as coihue. From a landscape of high vegetation you rise to a network of bonsai, of similar age, but whose roots dispute terrain with glacier debris and large rock formations. Water is the central element of the landscape: in solid state in the upper mantle of the glacier and overflowing in celestial when it becomes a lagoon.

When winter ends and the heat is still not so intense, along the way at least three species of orchids are shown in bloom, notros explode in reds and the tineo trees, typical of the Valdivian jungle, expose their flowers that from white mutate to red dramatically.

Between April and May, before the biggest cold reefs, mushrooms grow in the forest, between coihues and tineos. The creeping vegetation is enjoyed, as moisture is at its best. And upwards , the lenga forest is imposed, whose red leaves bathe the emeralds waters of the lagoon with its red flowers , composing incomparable patinas.

The white landscape of winter is imposing, offering as an unthought postcard to the frozen lagoon. The end of the beginning of the glacier is not distinguished between white. When thawing the lagoon, a residual ice center will shrink while the rest recovers its usual turquoise, in a lavish progression.

The lake is the main protagonist of summer, splendid under the stalking of the most intense suns. Around it, the color palette explodes, with the glacier as the persistent guardian of the ecosystem, white custodian on the heights.

The Torrecillas Glacier an invaluable pearl

In environmental matters, scientists around the world are closely observing the development of the Torrecillas glacier and the rest of the mountain glaciers of our country, since it is considered that the rapid retreat of the glaciers of the Andes and other mountainous regions of the world is generally considered to be one of the clearer signs of warming that the planet has experienced in recent decades.

Circus glacier, Torrecillas is located in an area of  Los Alerces National Park  preserved from the human presence, which receives about three thousand millimeters of rains a year. Glaciers melt naturally because we are not in glacial times. But also by global warming generated by human action.

Living testimony of a time when everything was white, survivor of the end of the glaciation, every year threatened by the warming imposed by the global development of human presence. Altivo, among the greens, emblem of Los Alerces National Park shines the Torrecillas Glacier, an invaluable pearl on the landscape of Patagonian Andean Forest and Valdivian jungle, as an ancestral protective guardian.