Home Travel Chubut That's why Piedra Parada is so famous!

That's why Piedra Parada is so famous!

An imposing 210-metre high rock formation stands alone in the middle of a wide cañadón, on the banks of the Chubut River. We tell you why she's famous. 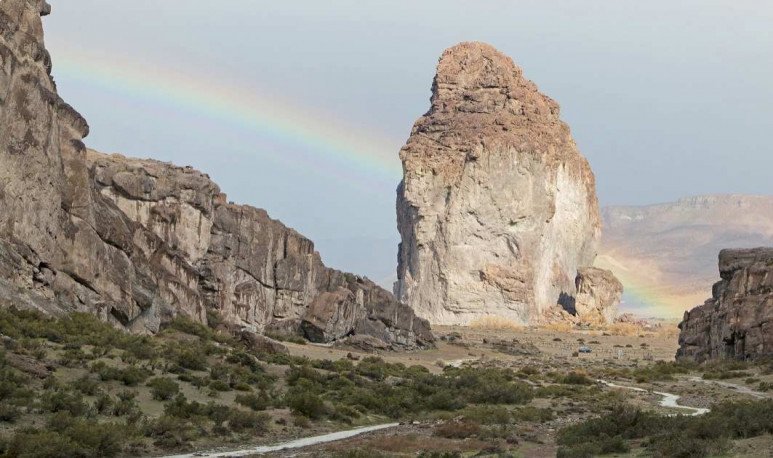 In the distance, rocky cords draw a ring that frames it in the middle of the arid Patagonian steppe. La Piedra Parada, in the northwest end of Chubut and an hour and a half from Esquel, is home to millions of years of geological, archaeological and paleontological memory.

The “Natural Protected Area Piedra Parada” is located between the towns of Gualjaina and Paso del Sapo, just 127 kilometers west of Esquel. S is reached by a zigzagging path that allows you to travel it as if heading towards an anthill.

It is undoubtedly one of the most precious treasures in the country in terms of historical, geological, archaeological and even paleontological content.

The past that coexists with the present

From West to East, the Chubut River runs parallel to RP 12 between Gualjaina and Paso del Sapo, when halfway crosses with that 210 metre tall, superb and mysterious mole: Piedra Parada. Survivor of so many geological movements, safeguards countless minerals, a living record that moves those who admires him in photographs, and who searches virtually in satellite images and strives to size it in all its glory.

What today is described as a giant cañadón that from the sky has the shape of an irregular polygon, was the caldera of a prehistoric volcano whose mouth, after a monumental eruption, reached 25 kilometers. The subsequent thawing of the Cordilleran ice nourished the area with endless colorful minerals, many of which are currently open to the attentive sight of those who inquire into their jaws. And some others survive in the rocky depth, safe from human curiosity. 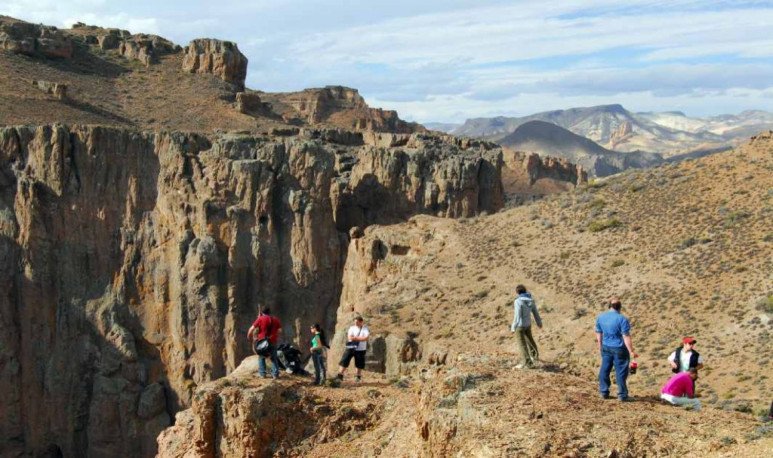 More here in time, on the outskirts of what was the mouth of the volcano, forming a black hill, volcanic glass emerged from the depths of the earth and solidified as it cooled. This material was used by the first inhabitants of the area to tip their arrows. The vitrofidic material was also used to make scrapers that allowed to clean the meat of animal hides, which would later provide the imperious shelter to face the coldest days, which in the area are truly icy.

Tehuelches cave paintings, with records of flowers and dots that referred to the journey of the deceased to the sky, complement this historical amalgam that brings together in one place the volcanic explosion of millions of years ago with the fossil remains of numerous prehisty species and oacute; rich invertebrates and the first human presences of the region, dating back five thousand years ago.

In the eight kilometers long of the cañadón, there are eaves that are studied by the National Council for Scientific and Technical Research (CONICET) and stone walls that exceed 150 meters in height.

Among the chaparred vegetation of the place, live and nest in this spring of living stories, native species such as bandurritas, windbreakers, mountain pigeons, widudites, black yals, blacktail colluditas, tucuquerers. Also birds of prey like rash, blackberry eagles, ashy hawns.

Colored falcons and often even the pilgrim, complete a majestic stage for observation and natural preservation. Chinchillones, very friendly mammals with a certain resemblance to chinchilla, are also an inaltable part of the environment, which are perfectly adapted to the rocky environment.

The Piedra Parada Natural Protected Area, is one of the options that are offered to us to share with the family and fill with new universes to promote in the near future, live it in a place with fullness, being part of that spectacular scenario. 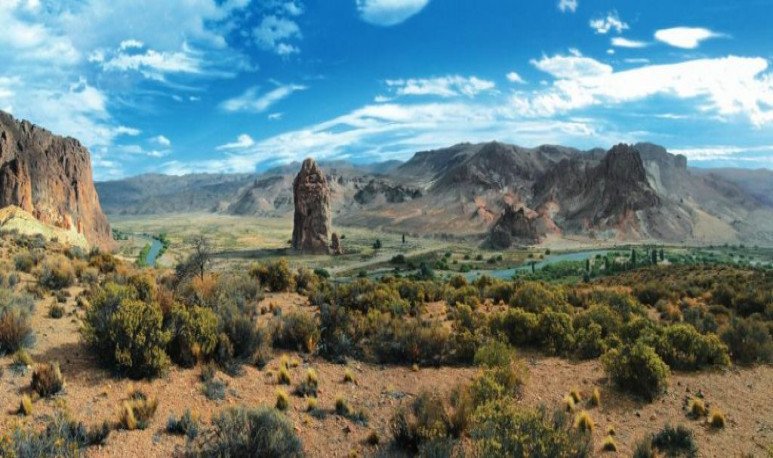 Strictly, Piedra Parada is a caldera of 25 kilometers in diameter that developed during the Paleogene period about 54 million years ago, thanks to a particular process of intraplate volcanic activity.

In a paper presented at a symposium on “Geological Heritage, Geoparks and Geotourism”, held in San Martín de los Andes in November 2013, Eugenio Aragón, from the Center for Geological Research of the University of La Plata and María Ubaldón del SEGEMAR, presented an estimation of the oacute; n how this natural wonder that dazzles visitors and virtual observers was conformed.

Aragon and Ubaldón explained that, in Piedra Parada, a mega eruption that exceeded 300 cubic kilometers of magma ejected in a short period of time concluded that, instead of generating a prominent mountain, there was a subcircular depression surrounded by an extensive plain razed.

In depression, a lake often forms in which small volcanic islands begin to appear until the magma supply is depleted, the system dies, and erosion dig up the caldera. Piedra Parada is the testimony of this, and today, on the edge of the Chubut River, the record of such majestic volcanic events produced throughout the life of the caldera, until its total and final cooling.

The preservation of this place is very important, since there is an unasible variety of rocks that account for the historical processes that gave rise to the genesis and evolution of great volcanoes of history.

How to get to Piedra Parada

Departing Esquel is 127 kilometers to the Reserve. Departs on Route 40 to the North. Passing Esquel Airport, you need to take access to RP 12, gravel in excellent condition. When you reach Gualjaina, turn left, cross the Teak River, and cross the village to the Northwest. The last section is circulated winding the Chubut River, boxed between rock formations until it is found.

Five centuries of history on the vera de la route 40

Have you visited the largest natural water park in the country?

Positive side of the quarantine: driveware back

Las Leñas confirmed that it will not open this year

Did you know that the most important private Paleontological Museum in South America is in Chubut?