We tell you why you have to go up to “El Indio”, Puerto Madryn, and take a picture. A curious fact for travelers. 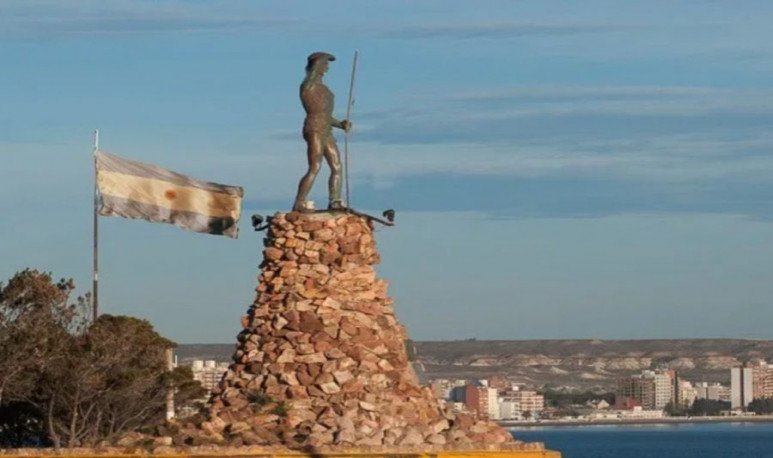 The monument to Indio Tehuelche  (we say El Indio  ) is at the southern end of the city of  Puerto Madryn , in Chubut. On Almirante Brown Boulevard, in  front of Punta Cuevas historic park.

The elevated sculpture depicts a  native   standing on a pile of rocks that covers the eyes of the sun with one hand to look into the ocean. In the other hand it has a long, large and imposing bow.  He is alert, but interestingly his image, which is trimmed against the sky, transmits peace.

The monument is a work by the sculptor  Luis Perlotti .  When Perlotti came to the city to supervise, in 1965, the construction of the other iconic monument that left us —  La Gesta Galesa — he was invited to design a project to beautify the place of Punta Cuevas. He later presented a model of what would be the monument to Indio  Tehuelche . This was funded by the Patagonian Industrial Union and although it was placed on the site where it is a few years later, it was not officially inaugurated until 2004. One of you know why they took so long!

I can say it without a doubt:  this one of the most special places in  Puerto Madryn .  One, tourist or local, heads towards “El Indio” (by car, by bike or walking) to admire the panoramic view and what a view is this!  Full of the most rosy sunsets in the universe  (it is said that when they are roses it is because there will be wind the next day). At night you  can admire the city lights reflecting against the sea, but watch it fills, and it's hard to park! And at dawn,  a huge sun sprouts from the ocean . Ideal if you are with the right company and a few mattes: make sure the day before you check well at what time it dawns.

But it's not only that, one can also go find some history. In the historic park of Punta Cuevas, there is  the  Argentine flag  , flaming to the rhythm of the Patagonian wind.  Next to it, the Mapuche-Tehuelche and Welsh flags are flying.  Beyond there is a monolith that on one side reminds the  Welsh  who arrived in Madryn on July 28, 1865 and on the other side the original peoples. A trail marks the way  for the first homes of the Welsh when they arrived.  But that's another story.