In Puerto Madryn, in addition to the natural charm of that city, there is a more than interesting gastronomic proposal. 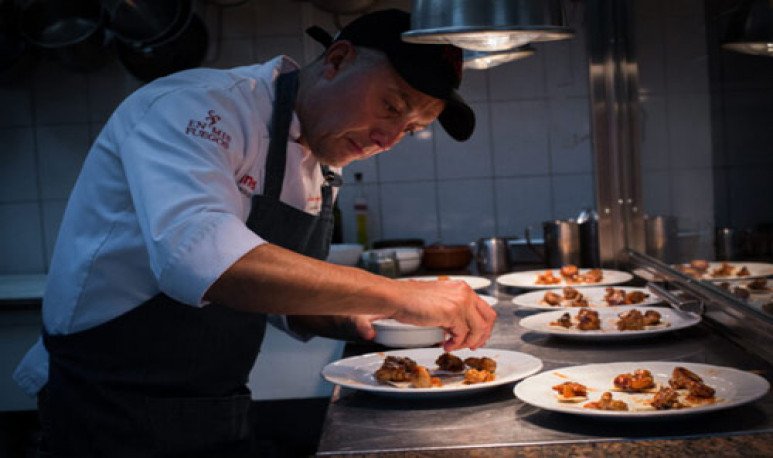 Thinking about the Chubutan city of  Puerto Madryn , leads inevitably to think about whales  seen from the coast, but in “  The most beautiful  ”, as they call it to that port town, there is a place that invites us to live at its best the concept of  Slow Food , a term, which was born andoacute; to serve as nemesis of fast food and also promotes the consumption of local products.

The restaurant “En mis fuegos”, by Gustavo Rapretti  -renowned chef- fits perfectly into that definition of Slow Food, as it is a space that encourages cuisine “with identity” well Madrynense, port and Patagonian.

All the ingredients of the dishes served there come from the area , from the sea and also from the countryside, like the exquisite  Patagonian lamb . Also, “In my fires” offers the possibility to taste  t   ruchas , undiary algae, scallops, white salmon  or  prawns   , among other delicacies.

Inaltable also on the table of a restaurant nestled on the shores to which the  Welsh arrived in 1865 : the traditional  Welsh cake .

A special feature of “En mis fuegos” is that it does not make dishes with cream, cheeses or frituras with the aim of enhancing the flavours of the area and preserving the Chubutense culinary heritage, while encouraging and supporting local producers, since Rapretti believes it is essential to know the origin of what one is going to eat. Actually, we could mention one exception: scallops with parmesan cheese.

Another feature of En mis fuegos is its 3-step menu, in which it offers certain dishes that the diner can choose options for entry, main course and dessert.

Although not a native of Puerto Madryn,  Gustavo Rapretti is born in  Patagonia , as he was born in General Pico,  The Pampa  . After receiving a chemical analyst and working for laboratories and for Conicet, he moved to Buenos Aires to begin studying in 1999 at the Argentino Institute of Gastronomy.

A year later he began to work in various gastronomic shops and his great talent quickly led him to be head chef and to work in  various hotels and restaurants in  Ushuaia ,  El Calafate ,  Comodoro Rivadavia  and Puerto Madryn , city where he settled to become a benchmark.

In “La más linda” he was the promoter of the event “Madryn al Plato”, a gastronomic festival that has not stopped growing in the port city since 2007.

Prior to inaugurating “En mis fiegos” in 2015, Rapretti opened Patagonia's first closed restaurant: “En los fuegos de mi casa”, which would be the antecedent to the project that is now located on Avenida Gales to 32 in Chubutense town.

Things to Do in Necochea