When the word vintage sounds our mind associates with Mendoza. However, there is a place in Argentina where this event has a peculiarity. Find out. 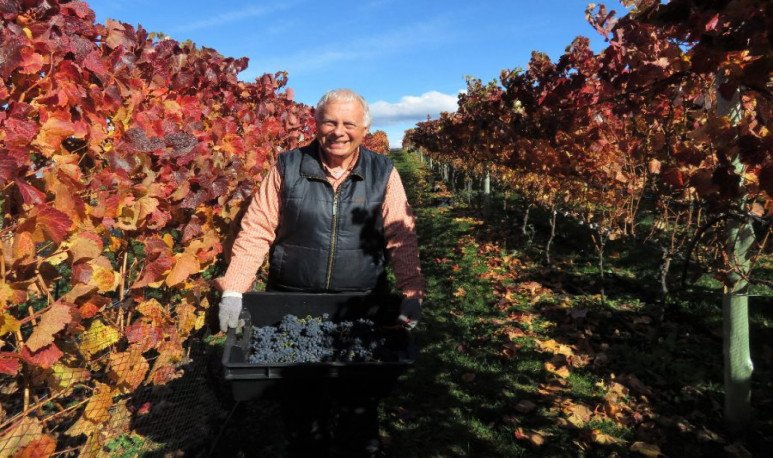 In immediate vicinity of the center of   Trevelin   , a town with origins   Welsh   , are the   Nant and Fall Vineyards   . They are located on the banks of the river that bears that name, and every year they make an important   party   to celebrate the beginning of the harvest of grapes, between April and May.

The     vintage     is the celebrated link in the wine production chain. The first   harvesting   of the   Nant and Fall Vineyards   was in 2016, in what meant the first big festival of vine production in the Valley October 16, in the west of the Province of   Chubut   . It was the first time that grapes were harvested to make wine on site and from there on, every year, the   visitors   who, visiting Argentina, arrived at that time to share the festival of an unthinkable production in the place, decades ago and today   contagia   to   new entrepreneurs   .

Since the first harvest of 2016 of the Viñas del Nant and Fall, the region has been positioning itself in this   industry   , receiving   recognitions   international by private individuals   strains   cultivated wines and the unique wines that depart from here to the most palates   demanding   and curious about the country and the world. In this context, the   wine production   has been added to the select list of splendid attractions in the area, next to nothing less than the Welsh chapels, the     Los Alerces National Park     , the center of Mountain Activities La Hoya,   tea houses   and the   La Trochita Patagonian Express   .

A tradition that crossed the ocean

This year, the     insulation       preventative   officially ruled to prevent the spread of Coronavirus forced to take precautions. However, considering all the recommended security measures,     harvesting     was carried forward and was celebrated, albeit intimately, in this   vineyard   that through this noble task weaves interoceanic ties with a   family tradition   which began in northern Italy in the early twentieth century.

Visiting the winery you will learn about the history that began with the purchase of four hectares of mosqueta farm on the banks of the Nant and Fall River in 2010. That was the beginning of a path for this new chapter in the history of the family   Rodriguez   . Spike, shovel, tractor and steel cable were needed to remove the muship. Meanwhile, technical prefeasibility studies were conducted in parallel to assess the possibility of implementing a   vineyard   in these latitudes. Soil analysis, requests for historical thermal records, field tests, plant genetics work and advice on     varietals     suitable for cold, concluded that it was possible to undertake viticulture. However, we had to resort to technology so that frosts did not ruin crops. And patience.

At present, the Nant and Fall Vineyards have two and a half hectares cultivated with   four strains   . More than half corresponds to Pinot Noir, with which they make a traditional variety, another pink and another white. They started with 300 bottles and in 2019 they completed an average of 13 to 14 thousand bottles annually. The   weather   of the   mountain range   is marked by the stations. Summers are warm with cold nights, which is good to our grapes. That's why wines explode in     aromas     and have a taste intensity above traditional averages.

Elegant and conqueror of excellent palates, Pinot Noir is part of the types of grapes of   cold weather   or short cycle - those that require less sunlight time for maturation. That's why it adapts so well to   patagonian weather   .

The   pinot noir   is a strain of French origin, characteristic of the Burgundy and Alsace areas, whose name refers to   black pine   by the shape of your cluster. Dark violet in color, it is a soft, kind and generous strain. It paired very well with any meal and is usually chosen to be unaccompanied drink: for the mere reason to enjoy a good wine.

In the northwest of Chubut province, traditional pinot noir red is produced, also a pink and other white variety; and even reserves and   sparkling   . Although retaining the general characteristics of this strain; in the color, aroma and taste of these wines, a   new identity   given by its “terroir”. There is a uniqueness that comes from the environment surrounding the production process:   floor   patagonian   microclimate   precordilleran,   disposition   of the vineyard.

The cold with which the plant lives along its maturative cycle generates a challenge for the production process that, with human effort and technology, must overcome frosts. These interventions result in organoleptic characters above traditional parameters, which envelop this pinot noir with a unique identity: a   varietal   which is immediately recognized and which, however, is new.

The   shine   of this wine takes distance from the dull brick color that is usual in pinot noir. In turn, in the perception of   smell   is there some confusion when wine explodes in a   amalgam of aromas   ranging from understory to red fruits such as strawberries, raspberry and ripe plum. This pinot noir is, in turn, a soft wine for the palate; elegant, velvety.

The   visit   guided to the vineyard allows you to know all the work that the owners did to turn a scrub into a camping area as neat as a   golf course   and in a prestigious vineyard. Over time, they were adding services and today offer a field warehouse (Tannin), gastronomic services and have their own   cellar   .
Apart from these basic services, tourists who use the   campsite   are they going to find a   organic garden   with: bell peppers, cucumbers, beans, peas, cherries, peritas, trunk zapallitos, Italian radicchio, varieties of lettuce, basil, etc;
Also highlights are the products of   chakra   such as: country chickens, rabbits and lambs, among others.

In   airplane   : Esquel Airport is 45 kilometres away and has daily flights.
Taking a   bus   : Every day buses depart every hour from Esquel Bus Terminal where services arrive from different parts of the country Especially from Bariloche, Trelew, Comodoro Rivadavia, Cordoba and Buenos Aires.
With   car   : Trevelin is located on Route 259 that connects to the mythical Route 40. From Buenos Aires, 2005 kilometers are traveled, while from the provincial capital, Rawson, 620, Ruts 25, 40 and 259 are covered by Ruts 25, 40 and 259
It is also possible to access from Futaleufú, Chile, walking 45 kilometers and crossing the Futaleufu International Pass.

A Sunday in the Tigre

How to get around the city of Paraná?