Goodbye stress: the Baths of Sáenz Peña offers an ideal place to relax

In addition to the immersion baths that eliminate all kinds of stress, the thermal waters have healing properties, so this site is very visited by tourists. 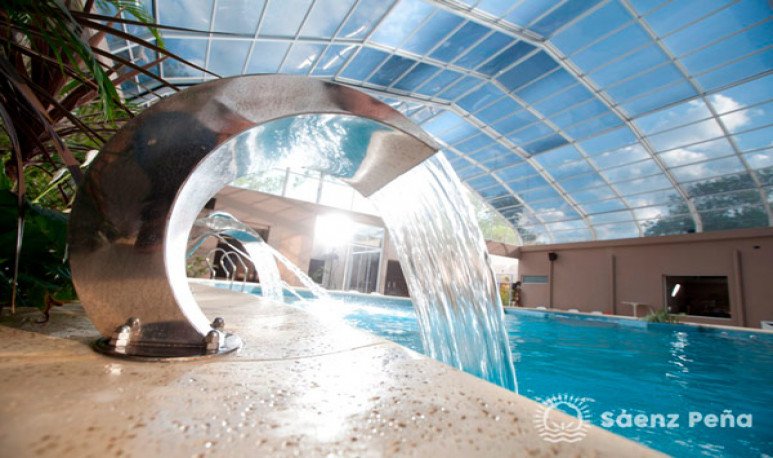 We are going through an atypical year due to the pandemic, and stress has come to stay for a while, until everything comes back to normal. Perhaps with the reopening of long-distance flights and buses is what we are waiting for most to be able to leave  home  and enjoy different destinations  which  is why we want to tell you that  the thermal waters of Sáenz Peña  are an ideal place to eliminate stress, and then you can face 2021 with all the batteries.

These  hot springs  are considered one of the best in our country because it has medicinal properties, therefore, over time,  Baths of Saenz Peña  has become a place tourist. This relaxation space is located in the heart of the city of   Sáenz Peña, and is the second most populous in the province of  Chaco  .

In its founding days, in Sáenz Peña  drought abounded, the lack of  rainfall was a great concern for the inhabitants of this village, and household activities were carried out using well water, which was not appropriate for consumption. The locals found fresh water streaks in the napas. Hot and cold water pipes were not used as such, but the installation was done so that fresh water came out from one of them, and salt water on the other.

The greatest droughts occurred in the winter season and therefore its inhabitants took extreme care of water from the civers, which were installed near the homes, and water was shared with two families. This water was used for cooking and washing hair. In the case of those families that were made up of several children and were soon left without water, they would turn to their neighbors and they would share them generously. Others were also on their way to search public offices where there was rain water.

In 1937, the national government sent a drilling team to this place where a public space was sought to start the potable water works, and block 60 was chosen where the Municipal Runway operated. At that time, water was found, but it was considered “unfit for human consumption”. But since Sáenz Peña experienced a distressing drought at that time, it was decided to reserve for the watering of the streets. The waters flowed permanently from a semi-urgent well and descended by natural slope towards 28 Avenue.

Discovery of the healing properties of waters

After the intendencies of Guillermo Durán and Pedro Morey, then begins the socialist municipal government of José Pavlotzky, a Jewish doctor who had arrived in Saenz Peña in the midst of the smallpox epidemic.

In this context, Guillermo Durán had previously commissioned the Viapian Engineer to build the Municipal Market, built on street 10, corner 15. Viapiano was staying at the Hotel de Alfonso Gonzalez, a Spaniard who had acquired the Hotel Oviedo, which was the first category hotel in Sáenz Peña, located on Avenida 1 (the first street in the town). This engineer was Mendoza and knew about hot springs, and at that time he visited the premises of the Baths of Sáenz Peña, in the company of Alfonso Gonzalez. On the spot, a small bath was first built, a kind of box where only one person could enter for the small part of his space, and there you could breathe the vapors.

Some time later, from the municipality it was decided to analyze the waters of the site and Pavlotzky took charge of bringing a 10-litre damajuana to Buenos Aires. In 1941 the Saenzpeñenses received the news that they have healing waters in their city. Meanwhile, in 1970, Pavlotzky began to carry out major projects on thermalism. Finally, in 1977 thermal pavilions were built according to the architectural quality of the Hotel Termal Gualok.

In the Sáenz Peña Spa you can enjoy immersion baths, sauna and Turkish bath cabins, rest overlooking indoor gardens, massages, aesthetic and cosmetological treatments. Also, these hot springs are indicated for more than 40 scientifically recognized therapeutic applications, among which are bone, dermatological, muscle and circulatory ailments.

Because of all these characteristics that make a dream place in the province of Chaco, the thermal waters of Sáenz Peña have become one of the most visited places by tourists. And if everything comes back to normal, this is a good option as a destination for your next holiday, and say goodbye to stress, as you can enjoy some good massages, thermal baths, pool service, sauna, hydrotherapy, Scottish shower, yoga, and reiki What else can you ask? I know, yes, it sounds tempting, so schedule the  Sáenz Peña Hot Springs as your next destination.

Mendoza is excited about summer

No one will be able to summit in Aconcagua

What to do in Cayastá