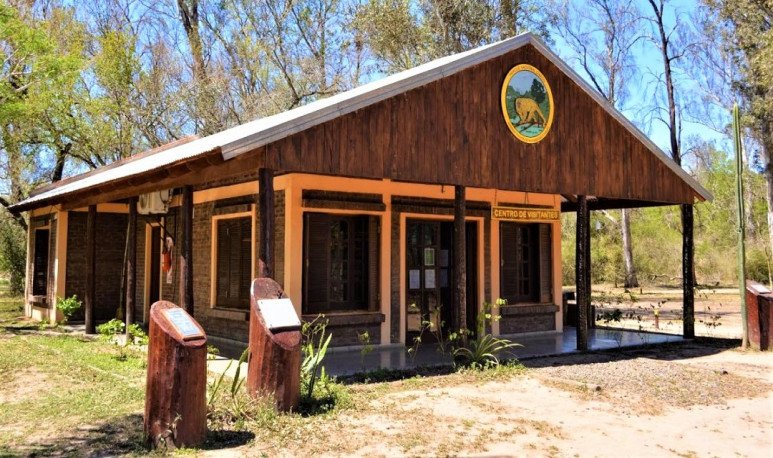 The Chaco National Park is a sheltered area of almost 15,000 hectares around the Negro River, adjacent to the town of Capitán Solari, in the center-east of the province, 120 kilometers from Resistencia. Thanks to its warm subtropical climate, it houses grandiose lagoons and a lavish jungle vegetation that varies with palm trees and bathings.

It was created in 1954 and since 1990 is a Strict Nature Reserve due to the large amount of trees, plants, birds, animals and natural panoramas that immobilizes between its winding and intimate natural trails.

Among its extensive and colourful flora, the red and white quebrachos, the red spinillo, lapacho, guayabí, guayacán and chaguars stand out. In the cerrado mountain, the quebrachos are escorted by guayacán, with a green and smooth bark, which offers protection to the morito or neccary of collar, a pig of mountain that lives in piara, and the guasuncho, a small deer that nourishes with leaves, fruits and mushrooms.

From the cover of the area some birds emerged that were not previously warned, and it is estimated that little by little other species that were moved from the national parks Mburucuyá, in Corrientes, and Río Pilcomayo, in Formosa, will begin to be seen more often.

The cocoé or tataupá listed, a kind of mountain partridge very difficult to observe already lets hear its whistles, analogous to those of a human being, increasingly often, even around pedestrian paths.

In several areas, of its almost 15,000 hectares, you can camp and also make cycling and walking tours, crossing new and safe hanging passages. There are hobs, guided tours, hot showers and activities for children, making the promenade ideal for families.

One of the pedestrian sections leads to the Lagoons Carpincho and Yacaré, where you can do bird watching and enjoy a more direct contact with animals belonging to these wetlands, such as the black pollona, the blackberry heron, the pampa harrier and yacaré overo.

The other supports access to very specific views of native trees. Either of the three offers unique balconies of the entire surface of the park, especially in twilight hours.

The Chaco National Park does not have large water courses, but its extension stands out the river Negro, which runs in the northeast, with a north-south direction, on a fairly winding channel; and the Salto de la Vieja stream, composed of a collector and the same name river, known within the promenade as San Juancito or Zanjoncito, which then flows into the Panza de Cabra lagoon.

In addition to the rivers, several lagoons and estuos make up its hydrographic map: the main ones are located in the northeast and are those of Gómez, Carpincho, Yacaré, Eulogio, Eyegneojos and the estero Ibarola.

In the southeast area, it stands out for its large volume the Palma Sola bath, the El Totoral estero, and the Panza de Cabra lagoon, with an extension that exceeds two kilometers and a maximum width close to 50 meters.

In the rainy season some trails are difficult to travel, but there are no overflows or floods because the watercourses are communicated underground and leveled as communicating vessels.

The park has a modern weather station equipped with electronic instruments and individual cabins for each park ranger, also with two 4x4 vans and everything necessary to ensure that the property is in optimal condition. This makes it possible for tourists to venture through a landscape where the diversity of flora, fauna, wildlife and local cultures will cause them a unique surprise.

Timetable and how to arrive

By car:  From Resistencia, by RN 16 to the west (65 km) and RP 9 to the north (40 km) to the town of Capitán Solari, where the administrative headquarters of the Park operates, from there a neighborhood road of 5 km reaches the protected area.

Other means of transport:  The Chaco capital receives buses from all over the country and neighbouring countries, as well as daily flights from Buenos Aires and several weekly frequencies from Cordoba. From this point, it is possible to reach the protected area by rental car, Remis or vehicle from a tourist agency, or board one of the four buses that link the Resistance Terminal daily with Capitán Solari