Trekking with flames in Catamarca

Las Mojarras offers us a unique experience with nature and related to wildlife: trekking with llamas. Are you cheering up? 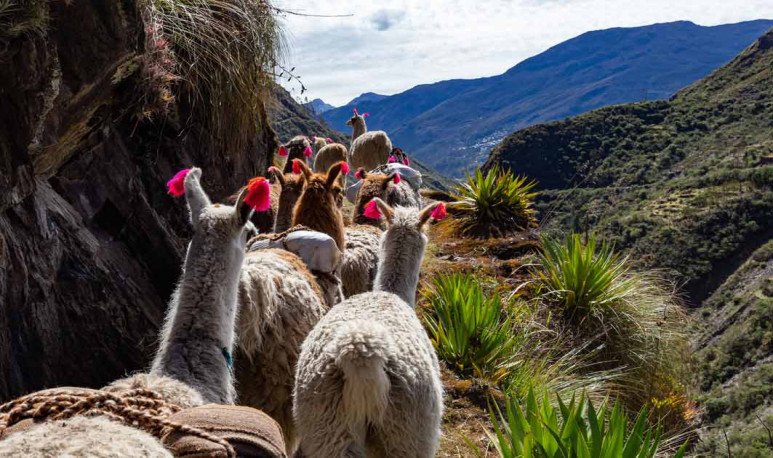 At the southern end of the  Calchaquíes Valleys , where Catamarca hugs Salta and Tucumán, is Las Mojarras. It is a  picturesque  village of a thousand inhabitants, surrounded by natural  postcards  and a great heritage archaeological as Cerro Pintado. There we can enjoy a trekking with llamas.

The community, located on Route 40, regularly welcomes hundreds of tourists who want to ascend to that hill in a very particular way: through a walk with llamas. The animals are kept in a small farm by a family that has lived with them for more than 15 years.  Trekking  requires about three hours of excursion (round trip) and touches tourists who are encouraged to share the experience with this species. The activity is carried out with few people, and always under conditions linked to the well-being of the flame.

The tour starts in the afternoon. At 200 meters from the farm and about 50 from Route 40 is the access to Cerro Pintado, about 60 meters high.

Before leaving, visitors share an explanatory talk about trekking with llamas, and can touch them to start building trust. Among other details, it is indicated that they are used to walking to the right side of people and that, if someone stands in front of them, they stop moving forward.

At the entrance to Cerro Pintado there is an apacheta, a mound of stones placed in a conical shape, one on the other. This is an offering of the indigenous peoples of the Andes to the Pachamama, on difficult slopes of the roads. In this place  tourists  are invited to add a stone, as a way to toast to the hill with respect.

By the adobe route

Always with the flame walking to the right, driven with a rope and with the saddlebags on its back, you cross a path with curves in ascending, between cardones, until you reach the Mirador de la Virgen, from where you can see the river  Santa Maria , the crops and the city.

Although the ascent to the hill is not demanded, it has its inclination, and the heat of the region makes itself felt. That is why it is recommended to bring water in the saddlebags. To be able to do the trekking with llamas we must reach the place of the activity. Las Mojarras is seven kilometres from Santa Maria de Yokavil, the head city of the department of the same name, which has a variety of accommodation and gastronomic proposals.

Top 4 rivers to visit this summer

Mendoza, among the 10 best places in the world to live

Cordoba, everything to discover in its art museums

Improvements in the mountain village of Las Cuevas

Argentina, one of the most beautiful countries in the world

Atahualpa Yupanqui and his troubadora house