Pigé, Berisso and Carlos Casares have a history that goes through them and deserves to be known on your next weekend getaway. 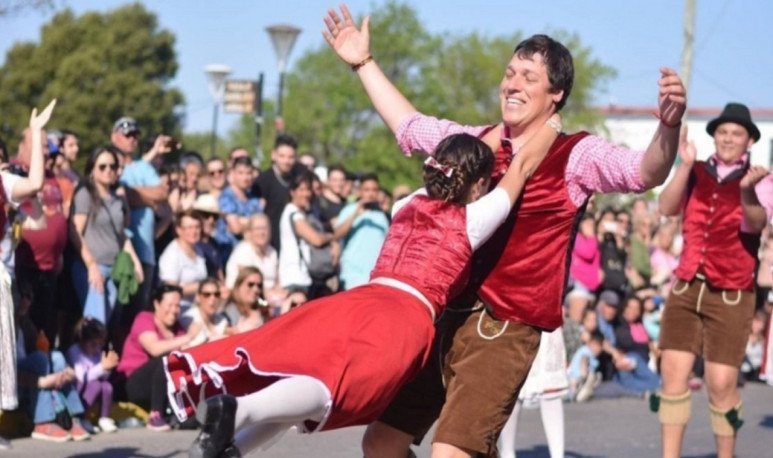 The extensive immigrations that the country experienced towards the end of the 19th and early 20th centuries are part of our identity, and in the province of Buenos Aires there are very deep marks. Cultural festivities through gastronomy, dance, festivities, their stories and even in the production of crops.

On September 4, 1949, the government of Juan Perón decreed that day would be Immigrant's Day. The date was chosen in commemoration by the order of the First Triumvirate (1812) which stated  “the Government offers its immediate protection to individuals from all nations and their families who wish to establish their domicile in the territory”.

If we were to draw a historical route, we could recognize the presence of different groups of immigrants throughout different periods. An immigrant who is changing, who is not always the same, but who retains some common characteristics that, beyond his place of origin, define him as such.

Already in 1853, and also today, following the reform of the 1994 Constituent Convention, the prologue to the National Constitution refers to  “all men in the world who want to live on Argentine soil”.

In Carlos Casares, Pigé and Berisso, you can clearly feel that legacy that forms part of their intangible heritage.

In 1891 the first Jewish immigrants arrived in Carlos Casares's party. Much came from the areas of Romania and Ukraine. They arrived in America with the  Jewish Colonization Association  (J.C.A.) created by Baron Mauricio de Hirsch, which made it possible, at that time, to lay the foundations of Jewish colonization in the Argentina, based on an agricultural project that was developed in different provinces of that country, the “Mauricio Colonia” was created on the outskirts of the town.

The settlement had its good and bad moments associated with the process of economic development. The lack of knowledge of the land, the rains and the climate led them to experiment about the types of crops. So they went from wheat to alfalfa and then to sunflower.

In the village, even today, oral tradition indicates that this crop entered Carlos Casares not because of the search to improve the economic situation but because of the aesthetic value of his flower and the sentimental connection with his country of origin.

True or not oilseed began to gain prestige in local production. Likewise, the economy and the affective values inspired by sunflower, found the breakeven point that ended up constituting Carlos Casares, in 1962, as the venue to celebrate the National Sunflower Day.

The festival begins with the blessing of the seed, and then the opening by the mayor of the city takes place. The event usually covers a long weekend, from Thursday to Sunday. It includes plays, musical numbers, great folk dances, cultural parades, dance shows, round tables addressing the issues of the sunflower industry, as well as the choice of the queen. Entrance to the party is free and free.

The French colony in the southwest

Pigüé, for his part, has a French accent, since most immigrants came from that country in Europe. The city was founded as a French colony in 1884. Its first inhabitants originated in the French historical region of Rouergue in Occitania.

Nestled in the old haciendas of Cacique Calfucurá, this town, which had 2000 inhabitants around 1900, has grown at a surprising rate. Its name, Pi-Hue, derives from the Mapuche and means something like “meeting place or parliament.” It was chosen precisely because in these lands the Battle of Pihué took place (February 15 and 16, 1858), during which the vanguard of the last line of the fort, under the command of Colonel Nicolás Granada, confronted the native peoples commanded by the cacicazgos who responded to chief Juan Calfucurá (the defeat of these made them parlament).

Pigüe is a place for a weekend gastronomic getaway as you enjoy dishes of Aveyronese cuisine such as aligot (a kind of mashed potatoes with lots of cheese and garlic), truffled potatoes (also with cheese) and pascades, good size sandwiches. Hybridiations with diverse populations such as Creoles and immigrants from other regions of Argentina and neighbouring countries were impressing another mark on the dishes: for example, truffled potatoes are made with cheeses such as fresh Argentine Sardinian and pascadas, they are enjoyed with a salty side like chard or with homemade plum jam (a delight)

But of course, what transcends borders in early December is the Giant Omelette Festival, an event held only in seven locations around the world, one of them Pigüé. At that time 15 thousand eggs, 100 kilos of ham and several kilos of different seasonings become the focus of the visitors' gaze. The festival includes the appointment of new knights who join the Omelette Brotherhood. The event is so important that the officials of the French embassy in the country are present. Schedule him to meet him in December.

The provincial capital of the immigrant

The installation of two large refrigeration corporations such as Swift and Armour next to the port and the shipyards of Rio Santiago, transformed Berisso into a labor hub for the hundreds of non-farmers who arrived in the country. That's why the city was the birthplace of work from the beginning.

In 2008, the Association  Museum  1871, named after the year of Berisso's founding, was created in the building of the Water Outlet that belonged to the old Sanitary Works of the Nation. The Museum has permanent exhibitions and has a library specializing in local literature and history; with a newspaper library with editions made inside or outside the city, but always referred to it; in addition to performing events related to the dissemination of art and life of Berisso. Recommended for touring.

Since 1977, Berisso has dressed up a party to receive between September and October more than 100,000 people who come to live, from different parts of the country, the “Provincial Immigrant Festival”

Year after year, during that month sports tournaments, a symbolic landing, theater performances, concerts, conferences, exhibitions, and mainly the Collectivities Festivals, which include musical and dance performances. The gastronomy also leaves its own thing in a specially conditioned place for this purpose. A multiplicity of flavours is offered there. Beet soup, varenikes (pasta stuffed with potato, meat and onion), kapus-tai (cabbage), poppy pie, bigos pierogi (Polish pasta), fatay and kepi, two icons of Arabic cuisine. Here are some of the delights of an endless and tempting list.

The celebration culminates with the election of the Queen and the Closing Parade of the Collectivities.

Source: Assistant Secretary of Tourism of the Province of Buenos Aires