An avenue full of details that tells a lot about our story. 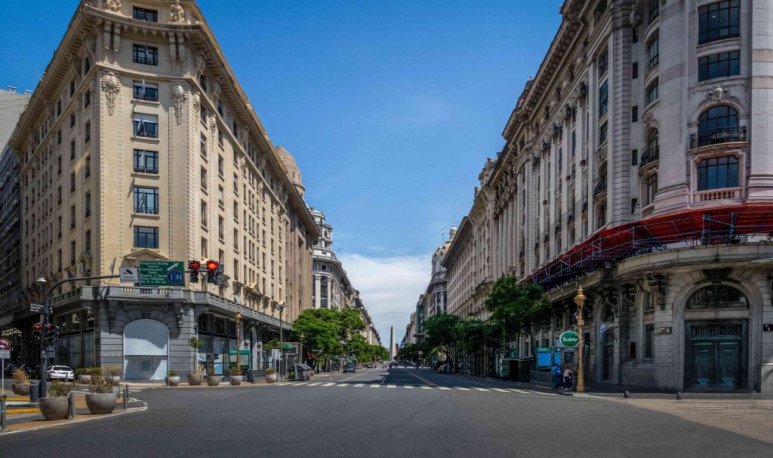 By: Gabriela Saavedra
Born in the heat of a first national centenary that was celebrated looking at Europe, Roque Saenz Peña Avenue brings together unique and distinctive constructions that were included in the application that Buenos Aires submitted to UNESCO to declare it a World Cultural Heritage Site. The popularly called Diagonal Norte was designed with Parisian inspiration and not only for its first buildings, heirs to French academicism, but because its design is the result of the modernization process commissioned by the mayor Carlos de Alvear to the French architect Joseph-Antoine Bouvard in 1907. This Buenos Aires of the early twentieth century wanted to imitate the spirit of the “Ciudad Luz”, which between 1850 and 1870 had already opened its grand avenues to avoid the popular barricades that had ravaged the French capital during several revolutionary periods of the eighteenth and nineteenth century. For the opening of the avenue, which was born in the Metropolitan Cathedral and ends in Lavalle Square, loans were requested in 1913, lots were held, to proceed until well into the 1930s to the construction of buildings of various architectural styles with luxury details and advanced technology. “The avenue should be observed from the Plaza de Mayo to Tribunals, which is the general order in which the buildings were made. As we progress in that direction, you can see how they respond to the styles and materials of each era,” architect Alicia Aletti, a specialist in the history of Diagonal, told Telam. Aletti, who participated in the recovery of many fronts of the artery, explained that “in the first blocks French academicism predominates, then eclecticism, art deco and rationalism.” Although thought as an artery of predominantly business buildings with commercial premises, the noteworthy note is that some floors were destined for what in the middle of the 20th century was known as “furnished”, that is to say rooms that were rented by hours for the meeting of stealth lovers. “There are at least four buildings that, on their upper floors, have these spaces with Murphy rebeatable beds and a space for service personnel who communicated through ringbells with the occasional occupants,” said Aletti. The intersection between Diagonal Norte and Florida is a special point of attention because there is the monument to the former president that gives the name of the avenue, Roque Sáenz Peña, and because five of the most significant domes of the entire avenue are erected. Three of them have as their common origin the surname Bencich — two are “twins” and represent the brothers Massimiliano and Miguel, while the remaining is the uncle of theses—the fourth is that of the former Boston Bank and the fifth is “La Equito del Plata” which honors the staggered pyramid of Zoser. The case of the old Boston Bank has the particularity of being a building whose style corresponds to the “plateresque spanish” style and its front, made in limestone, was carved and brought from the United States for final assembly in the corner of Diagonal and Florida. YPF's ex-building does not stand out from its neighbors in decorative or ornamental terms, but because it is “advanced” in various ways: its first 23,000 square meters were built in concrete in record time, he knew how to have its own connection to Subway D for its 6,000 employees and a garden terrace long before imposing the idea of “green roofs”. The one outside of YPF is not the only building of an oil company that has a distinctive feature, since the one built by the Anglo-Dutch Shell took advantage of the vertex generated by the avenue and by Esmeralda so that the plant of its headquarters had the shape of its logo, a seashell. “When they ask me about the amount of details that are in all these buildings I think of Nicolás Avellaneda's phrase that says 'there is nothing casual in history. ' Well, in Diagonal Norte, either,” stressed Alleti.Source: Telam