A tour of the southeast of the province of Buenos Aires through the highlights in the work of an architect who painted the landscape with Art Deco.

It was a time when  Europe  expelled its children. And in that  migratory flow  our country welcomed them with open arms:   “for all the men in the world who want to live on Argentine soil.”

Salvatore Salamone  left Sicily, to try his luck in America, at  the end of the 19th century . He arrived at the port of  Buenos Aires  with his son Francisco in his arms. Salvatore was a builder and that legacy passed on to the child. And this was how the young man received first master of works at Otto Krause in Buenos Aires and as an architect and engineer at the National University of Córdoba. Unknowingly, for Francis life would have prepared a surprise that would immortalize him.

In 1936, he met the governor of the Province of  Buenos Aires , Manuel Fresco. The president belonged to the  Conservative Party  and wanted to use public works to appear in  history  books. His chimera was: to refound a monumental province. And Salamone perfectly interpreted the politician's dream.

Between 1936 and 1940 it deployed almost 70 works in 18 municipalities, including Azul, Epecuén, Laprida, Gonzales Chaves, Balcarce, Coronel Pringles, Tornquist, Guaminí, Saavedra and Saldungaray. Works loaded with monumentalism, megalomania and ambition, said in the forceful  language  of art deco, functionalism, Italian futurism, German expressionism and Russian constructivism. However, it is only a few years ago that his  work  is beginning to be rescued from an oblivion in which he fell for those things that our history has.

The most emblematic structures

Villa Epecuén  had its tourist heyday at the hand of its lagoon with  therapeutic properties  . It is located in  Adolfo Alsina 's match, just over seven kilometers from Carhué. Its origins date back to 1921. It came to have about 1500 inhabitants, who had to be evacuated in 1985, when the overflow of the lagoon completely flooded it. From here we rescued the Municipal  Slaughterhouse  , designed by Salvatore Salamone in 1937. Highlights include an expressionist tower and an attractive brick fireplace. The graphic of the function and its explicit demonstration by the word “slaughterhouse” awards to a typology that is not so disclosed. 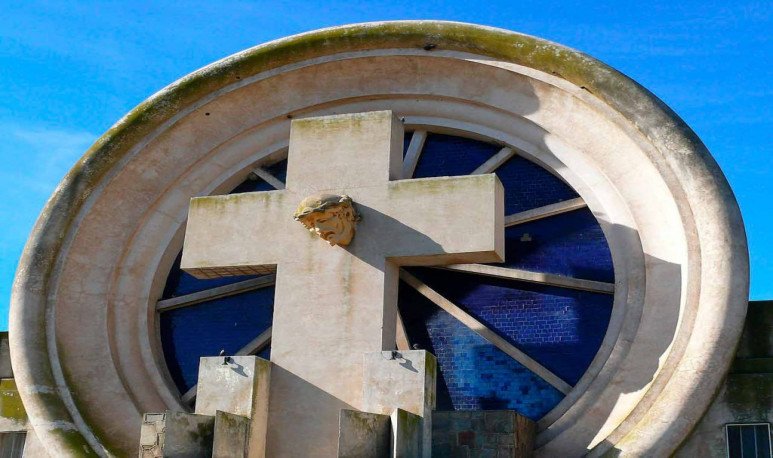 Saldungaray  is a village lost in the  Ventania system, the Southern Sierra of  Buenos Aires . Here surprises the entrance to the  cemetery . An arch of 12 meters high, which completes at its bottom an almost perfect circumference. Inscribed in the figure, a mourning Christ. In its buttresses nest administrative rooms and niches chambers. Inward, it lacks any treatment and offers only a bare wall. 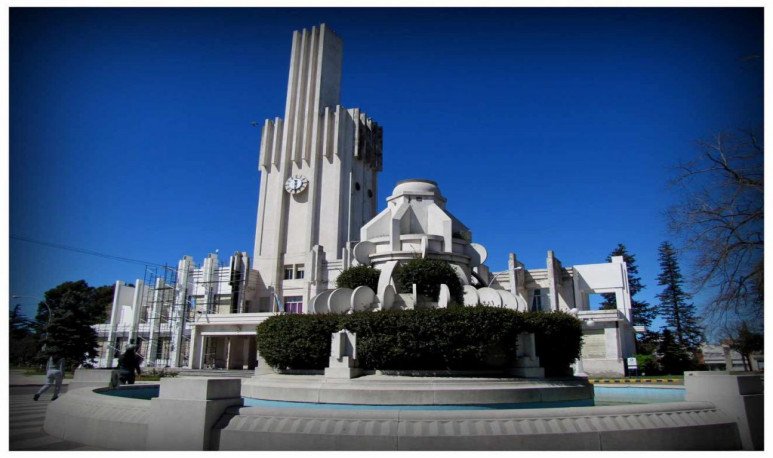 From the access to  Coronel Pringles you  can see the monumental municipal tower. The headquarters of local  government  stands in a square spanning two blocks and is crossed perpendicular by a  boulevard . Both the  square  and the central rambla have as a motif in motion tiles that are repeated in Blue. The tower is the component that confers institutional presence and the clock as the main object that establishes the order to follow, in a territory that was precisely identified for pursuing other rhythms, such as those of the cycles of agriculture and  livestock .

In  Azul , 330 kilometers from the City of Buenos Aires, Salamone built one of its houses, which still exists, is located in Belgrano and Colón. A property that goes unnoticed unlike what happens in the center of the village. There he hits his square with the floor that “moves”. The architect achieved an optical effect thanks to rhomboid tiles of white, gray and black, which pleads the forced sobriety of the natural. The three types of benches, the two kinds of  street lamps    and the monument to  General San Martín  complete the entire magic of salamonic  design  . 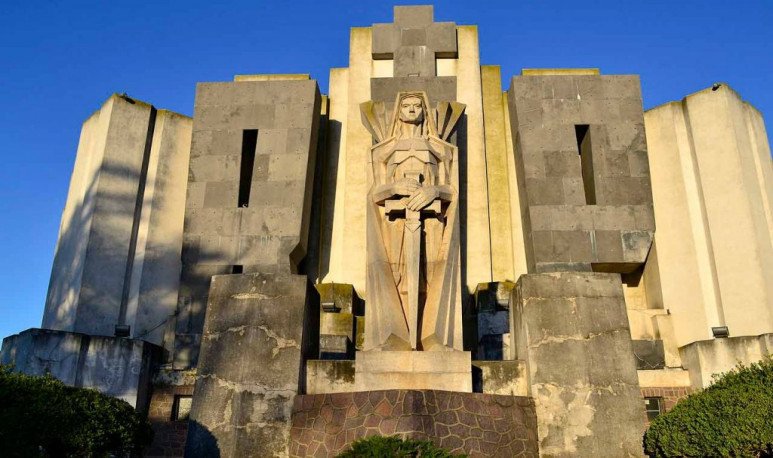 Leaving there and going where souls rest, the welcome to the  cemetery  emphasizes the image of the Exterminating Angel that is trimmed against a gigantic RIP corresponding in Latin to the Requiescat In Pace. The cubist sculpture of the angel has a sword in his  hands  and his frowned face has the particularity that as the sun is giving him the sun expels unequal expressions. This allegorical and expressive character gives a heterogeneous atmosphere, directly linked to the guidelines of that religious level.

Salamone listens energetically among the most fanatical passionate and the most troubled detractors, who conjecture in the effigies a set of images at the service of the political diffusion of conservative Argentina, of the Infamous Decade.