Home Travel Buenos Aires The magnetism of the Castle of Egaña

Near the town of Rauch is a castle full of stories and legends. 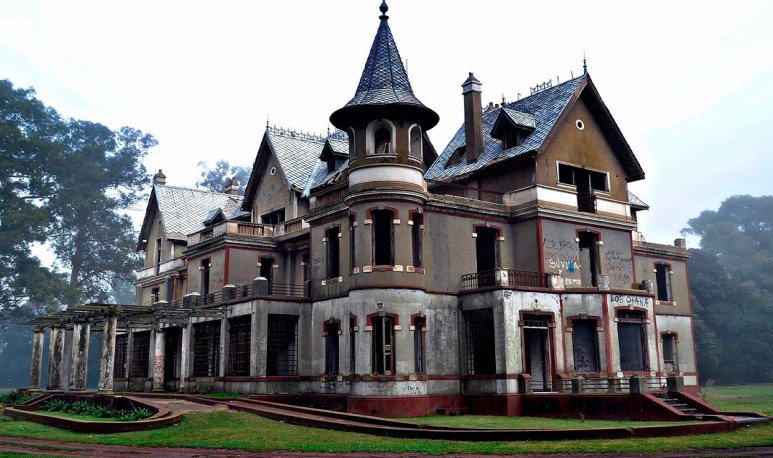 Are there places that attract tragedies? What determines that any construction is a happy home or the setting of a  ghost story ? Energies? Just a chance? The truth is, there are places where bad things happen. And from them, legends are woven that make it difficult to separate myth from reality. Maybe that's exactly what your magnetism lies. Today we want to invite you to take a walk through the  Castle of Egaña . Let's go?

In the interior of the province of  Buenos Aires , there are many buildings from other times that have been  abandoned , and that try to contain among its walls worn out stories of times past.  What was once luxury, today is destruction , as if the future of life wanted to show us that the material is ephemeral and that the most beautiful palace will then be just a gray construction. Something like that happens in the town of  Rauch , 270 kilometers from Buenos Aires. There is  Castillo San Francisco , also known as  Castillo de Egaña .

The castle is located about 25 kilometers from the city, in a place called  Egaña Station . There, a hand-written poster welcomes visitors. Years ago, Egaña was an important connection point with  Buenos Aires , as hundreds of passengers arrived by train on their way to Tandil. Today, foreigners who approach the place are moved by the curiosity to know the castle, some because of its architectural interest, others because of the magnetic horror stories have.

A banquet that lasted 30 years

The history of this place has a direct link to our  May Revolution . It happens that the work was carried out by  Eugenio Díaz Vélez , grandson of the  procerer Eustoquio Díaz Vélez , who participated in the wars for the  Independence . Construction began in 1918, on one of the many lands he had inherited. They say that Eugenio — who was an architect — was not very dear to his family and that he was a man full of whims. He spent his days between his house in  Barracas  — where Casa Cuna is today — and his trips to  Europe  . From the Old Continent he sent materials for the construction of the castle and brought new ideas. Many times, a new occurrence caused them to turn back on what had been advanced in building and start over.

The result was an  eclectic construction , with a three-story structure framed in a huge mountain with more than 80 different species. It had 77 rooms, 14 bathrooms, two kitchens, galleries, patios and a carpentry workshop. The castle is almost invisible from afar and appears before the visitor's eyes only when it is right in front of it.

The  Castle of Egaña  was completed in 1930. As was customary at the time, a  large banquet  was organized to celebrate the inauguration. Family, friends and domestic staff were ready for the big celebration. The table was served, but the host was missing, who had not yet arrived from Buenos Aires. Then, the telegraph brought the news:  Díaz Vélez had died in his house in Barracas from a heart attack . Eugenio's wife decided, then, to leave everything as it was and that the guests would return to Buenos Aires on the train that should have brought Díaz Velez. And so it was:  the table was served, with tablecloths, plates and glasses.

Legend  has it that  the table was set for 30 years  waiting for the banquet that never happened. Neighbors say that, through the glass that broke over the years, you could see the luxurious table stopped in time. In 1960, when they finally entered, many of the valuable things that were in the rooms had disappeared.

A place of tragedies

However, the history of the castle does not end there. In the mid-1960s, the property passed into the State and began to be administered by the Minority Council.  It was then transformed into a juvie.  Some building modifications were made, which can be seen today mixed with the hindings of the luxurious elections of Diaz Velez. But it seems that the  tragedy  was still housed in the castle.

In the late 1970s, a young boarding  school shot dead one of the local managers . A few months later, the reformatory closed, but among its walls remain stories of ghosts and spirits. They say experts have detected  paranormal events there.

What to do in the castle?

In 2010, there was an attempt to demolish the Castle of Egaña, which prompted the creation of the group  “For the reconstruction” , which works on the conservation of the site. They organize guided tours of the castle and it is also possible to take advantage of the place to spend a nice time outdoors.  There are tables, benches and a children's play area.  On Sundays, there is a  canteen  where you can get food and drinks. Or, simply, it is possible to approach there and  assemble a picnic  on our own in a different and charming setting.