The province of Buenos Aires has majestic temples, however there are others who deserve to be known on your next weekend getaway. 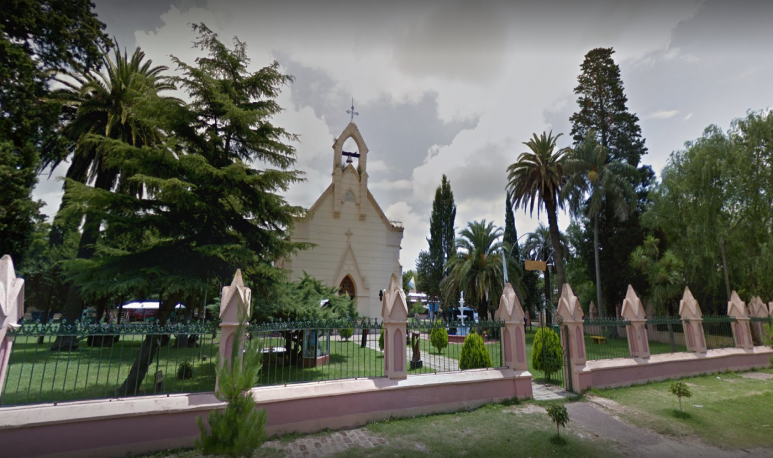 The province of  Buenos Aires  has temples with architectural characteristics that make them unique. The Basilica of Lujan, the cathedrals of La Plata and San Isidro to name a few. Others, without having such majesty, treasure unique memories and, above all, the love of their people. We present you some temples of the province, places where the history and faith of insurmountable towns come together.

Shrine Our Lady of Lujan, Uribelarrea

Uribelarrea is located just 87 kilometers from the city of Buenos Aires on RN 3. This neo-Gothic church, designed by Pedro Benoit and inaugurated on December 18, 1890, is located opposite Uribelarrea's main square and has a beautiful architectural style that can be seen in the bell tower and its pillars. It rests the remains of the founder of the colony, Miguel Nemesio de Uribelarrea. It has a museum and a santeria. The venue was chosen in 1996 by film director Alan Parker to shoot scenes from the film Evita, and there were also filmed the death of Juan Moreira and other scenes from film productions.

Our Lady of Transit Church, Saldungaray

Saldungaray, known as the oldest town in the region of Ventana. It is located 8 kilometers from Sierra de la Ventana and 100 from Bahía Blanca

Officially inaugurated in 1909, the image of the Virgin who rests on the main altarpiece of the church receives the invocation of Our Lady of Transit to Eternity. This is a large sculpture in oak wood, brought from France by Don Pedro Saldungaray and his wife, Nicolasa Alzú. The story tells that while the chapel was being built, the founder's wife seriously ill, then promised that, if she improved, she would travel to Europe to choose the Virgin and the altar. In 1905 from a village in France, they embarked with the “Dormida Madonna”. They arrived at the port of Buenos Aires and carefully sent the packaging to Saldungaray by rail. It consisted of the altarpiece, disassembled in pieces, the image of the Virgin and two other carvings.

. The image of the sleeping virgin is another of the tourist attractions of this small mountain village. The carving is made of oak wood, is hollow and has been made in several blocks. It rests on four pillows, which makes its torso elevated. 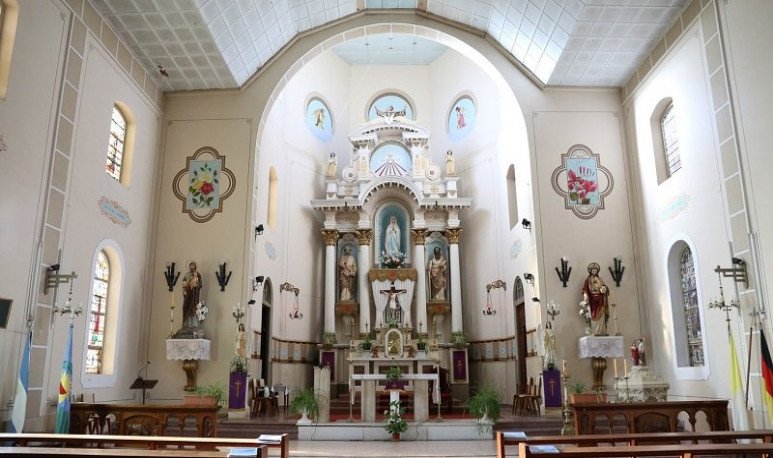 The city of Coronel Suárez is located in the southwest of the province of Buenos Aires 180 kilometers from Bahía Blanca. When the village was founded, at that time called “Cologne 3”, on May 11, 1887, a wooden cross was erected on the site destined for the church, at the foot of which the settlers gathered to pray. The following year a wooden chapel was erected to carry out their religious practices. The present temple was erected in 1897, has a large wooden altarpiece built by two Dutch in the Roman style. On its top it has a stained glass of Christ the King, where the rays of light penetrate with such intensity, that they produce an effect that highlights the greatness of the structure. In the 1950s and seventies, several parts were made by the plastic artist Salvador Schneider, so his art is present throughout the church. This temple is a pride for the people, because of the deep religious faith that has guided its inhabitants.

Chapel Our Lady of the Rosary, Azcuénaga

Azcuénaga is a town founded on July 1, 1880 with the inauguration of the railway station. The city of San Andres de Giles is 11 km away. This temple is located in the Plaza Miguel de Azcuénaga, which has a leafy grove.

The main altar, built in Neo-Romanesque style, and made of wood with handicrafts simulating marble, was made in the Spanish city of Zaragoza. Its first stone was laid on May 4, 1902 and was blessed by the Auxiliary Bishop of La Plata, Monsignor Francisco Alberti.

Five kilometers on the “Camino Real” linking Luján with San Antonio de Areco, is “La Posta de Figueroa”, a historic place that functioned as such at the time of the carts and hacienda harreos. Part of the 18th century house was visited by Juan Manuel de Rosas, Facundo Quiroga and José María Paz. Its recovery boosted the tourist attraction of the area.