Home Sports “Las Lionas” were left with the bonus point

“Las Lionas” were left with the bonus point

They won over Germany in the shoot-out 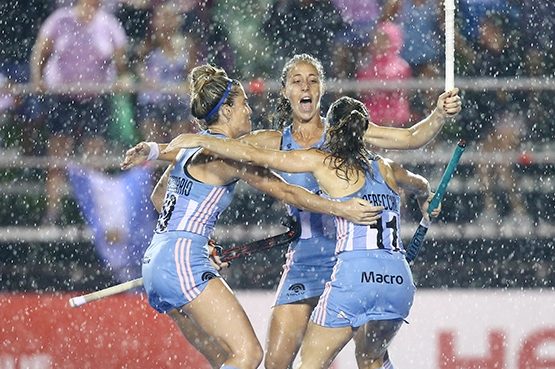 The Lionesses smiled again, this time against Germany and with the CeNard as the stage. It was under intense rain that accompanied much of the match that even forced the interruption of the game repeatedly. It was a draw by 2 to 2 in regular time and with suspense until the end, the led by Carlos Retegui won by 4 to 3 in the shoot-out. They added two points and remain unbeaten in the new competition promoted by the International Hockey Federation.

Argentina found the opening of the scoreboard early. Within three minutes, Delfina Merino took over the bocha, overflowed and defined a backhand cross to the table. Gradually the team dominated and generated risky situations. On the closing of the first stage tried Carla Rebecchi backwards, but her shot was lost by the bottom line. After

24 minutes, the first short corner of the match arrived, but again Rebecchi was unlucky after his drag was lost above the crossbar.

At 36 minutes the match broke for the first time and after resuming Germany found the draw capitalizing on its first short corner through Rebecca Grote. Two minutes later, the Europeans hit again. After a row of fixed plays, Muller-Wieland put the 2-to-1.

Another break over the closing of the third quarter that resumed with the tie for the Leonas after taking advantage of the third fixed play. Pasada by Silvina D'Elía and a detour from Rosario Luchetti made it possible to 2.

In the last quarter and under heavy rain, no team managed to change the scorer and the points were split, although Argentina took the bonus point for the shoot out. Lucina Von der Heyde, Carla Rebecchi (2) and Agustina Albertarrio turned for the victory added to an outstanding performance by Belén Succi under the three clubs.

This Sunday, from 18.30 hours, the Leonas will face Holland for the fourth round of the FIH Pro League. The match will have live broadcast on ESPN+ & ESPN Play. Tickets for the day, which will also be played by the Lions, can be purchased through the Ticketekportal.

Gaudio: “We will follow the players all year round and give them the support they need”

What exactly is self-esteem?

What are you looking for?

When River played in Recoleta

Do you eat “healthy” and not lose weight?

“Sound Garden”, a theatrical experience that will take place in the Botanical Garden during March