The Valle de Uco dam is one of the least exploited in tourism. However, it gained fame and respect for a dark anecdote treasured by its forests. 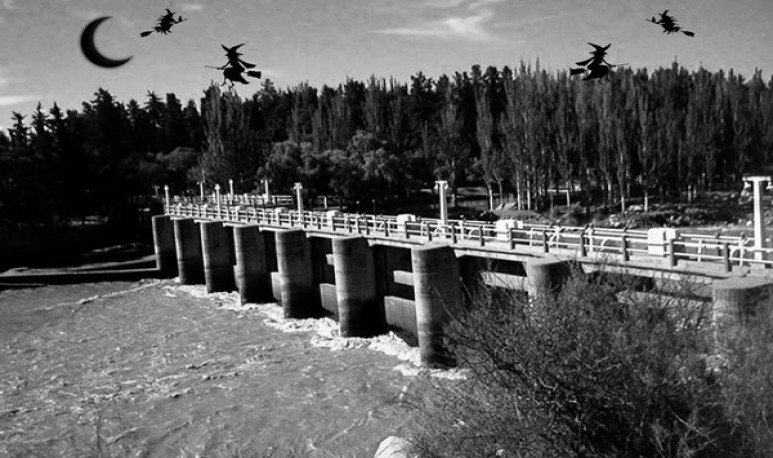 Going to the  dam to eat a roast  is a typical practice in Mendoza and, probably, most Argentines. Meat, drinks, coffee table, benches, bread, salads and everything you need to spend a day with family or friends. That's what is loaded into the car and departed from morning, early, until night.However,  the protagonists of this story decided to stretch the stay a little longer and, to the elements mentioned, they added the tent, to spend the night in nature.  But you never wondered why no one spends the night in this forest?The answer, then.

A weekend between friends

A group of young people from Mendoza decided to spend one night at the Valle de Uco dam. It is  a water mirror that performs purely energetic functions and is poorly exploited at the tourist level.  However, it is surrounded by a very picturesque pine forest. There came the Mendoza teenagers looking to spend a pleasant moment among friends.  When they arrived, they were struck by the fact that they were the only ones in the area . There was absolutely no one around him. As it was the last hours of the afternoon, they thought that those who had gone for the day had already retired.

Also when they arrived, they warned that they had forgotten to carry flashlights or a portable light. That's why  they decided to be located in a slightly freer area of so many pine trees, so the    moon would provide them with a little light  . They unloaded everything and set up the fire. Anecdotes and jokes ran on par with  fernet glasses. The meat went to the grill and the night was perfect. Already with a few bites in his belly and several cubic centimeters of fernet consumed, one of the young people felt like doing his needs and walked away a little, to the trunk of one of the pine trees.

It was all laughing and laughing.  He started urinating while laughing at a joke he heard, in the distance, from his friends. When, all of a sudden, the smile on his face disappeared. His eyebrows arched and his mouth was wide open. He began to hear loud noises of twigs and leaves shaking and crunching. He looked up and a pineapple peeled off the pine and hit him on the forehead. Dodging the projectiles he managed to see a lost face between the branches and the darkness.  A haggard, bony face with a long nose and a prominent chin. From there came the laughs. Macabre laughs.

The young man turned around and started running, with his pants half up, as he could. He lacked the air. He took fast and long steps, but the campfire and the group of friends were further and further away. He finally arrived. Sweated and drowned. His friends stopped laughing and telling anecdotes. They looked at him and worried. After a few seconds, he managed to tell them what he had lived through. No one believed him. They accused alcohol as responsible for their friend's imagination. But a pineapple hit one's face. He looked up, and he dropped another one. Suddenly, it was like a rain of pine cones. Evidently, the young man was not lying.

They couldn't reach the boys to get things up in the car and leave.  Finally, they climbed and took the road to the main route. Meanwhile, on the side and in the distance, you could see a huge   2-meter-high  campfire  with 5 people around.  They revolved like dancing around the fire. They looked up and then down. They wore robes with pointed hoods. They were witches. They reached the main route and stopped at the first hotel in  San Carlos . They were stunned. The janitor received them and told them the story.

The young people knew that the witches they had seen  were five sisters who lived in the forest more than half a century ago. They all lived together in a house, doing no harm to anyone. However, a group of teenagers visited them one day to hurt them, because that generated fun. The poor women were subjected and assaulted. One of the boys passed his hand with the joke and “inadvertently” ran over one of the women as they ran away from the place. The other four sisters did not bear the pain and committed suicide , drowning in the dam of the Valley of Uco. Their souls remained inhabiting the area and, therefore, every time a group of young people goes to the place, they are deeply rejected.

A roast on the dam