The ruins of the Samay Huasi hotel, in El Manzano Histórico, are a reference for those who travel the place. But the story about the fire terrifies. 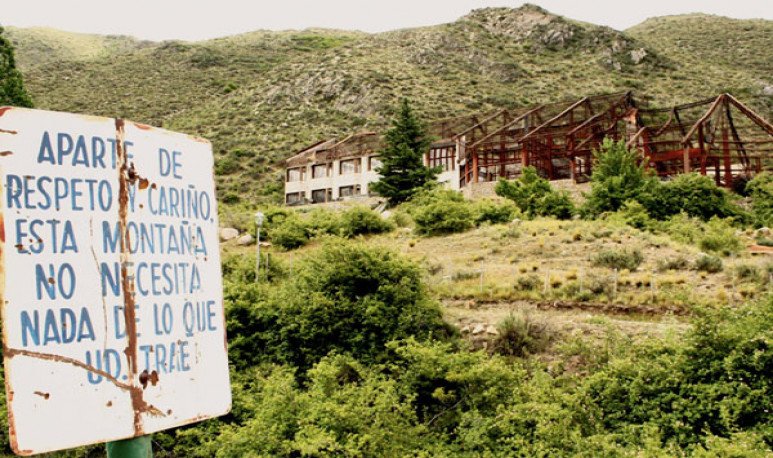 The official story tells that,  on Saturday, June 7, 2003, a boiler broke out in the hotel basement and the fire quickly consumed the place. The destruction was total, but no fatal victims were lamented. However, the true story is much more gloomy.

At the end of the last century he arrived in the village of Vista Flores, about 30 kilometers east of El Manzano, a construction company looking for people to work on the construction of a hotel in El Manzano,  passing what is Paso de Los Puntanos. There was a lot of money in the way and they offered, moreover, the possibility of continuing on other projects. The work was very hard, besides the cold, the terrain is very rocky, so every shovel was a martyrdom.

Tasks started, and after the first three months, leveling was not yet finished. One Wednesday, as monotonous as any other, minutes from lunch,  one of the crews stopped his work and called the manager of the work, Engineer Moretti. They had found bones, at first they thought they were from some kind of animal, like cows or  goats, but they dismissed it when they found a human jaw.

The engineer stopped all ground movement and called the owner to communicate. The owner contacted the local police and at hours there were two mobile phones surrounding the place.  The forensic police determined that the remains were at least seventy years old, and the investigation continued to be carried out by the UNC's anthropology department. A group of archaeologists arrived and, to their amazement, they found that it was not a mere burial, but that it was a mass grave with at least fifteen bodies inside, dating from approximately 1940.   Investors didn't want to know anything about this story as the work was about to be suspended.

What happened to the dead?

The remains found were from four whole families, men, women and children.  There were signs of violence, they had killed them like dogs . But the records of the time did not account for any fact of violence of such characteristics, let alone the death of fifteen people, it was obvious that the murderer had managed to get away with impunity.

However, from one moment to the other, the owner of the land was present at the site with police and court orders. Tasks had to continue, for the peace of mind of investors.

In two years the works were finished and the time came for the inauguration. He came to the same governor of the province, the agape was opulent and full of luxuries.  That same night a very dear and recognized man from Vista Flores was appointed to be the guard of the place, with a very good salary and a house of his own where he could live with his family.

The first months of activity were quite a success and the occupation was to the fullest. But everything changed on a cold September night.  A young couple of tourists called the reception, denouncing that screams and crying were heard in the next room, number ten. The receptionist asked the security man to go investigate, warning him he wouldn't find much because that room was vacant,  according to reservations.

As he climbed the stairs, he found the whistleblower couple in the hallway. They told him they heard screams, crying and assaults.  The man came to the door, didn't hear anything . He asked the boy permission to enter his room, from the window he could look out to room number ten and could see if there was anyone there. But he didn't see anything, confirming what the receptionist had told him. However, when he was retiring down the hall, the boy called him again, asking him about his girlfriend. I just disappeared from the room. They thought he might have gone down to the central hall. When he arrived, not only was his girlfriend, but the receptionist was also not found.

The groom climbed the stairs again and went looking for his girlfriend in room number ten. The guard followed him and, upon arrival, saw a man with a trigueño complexion coming out the door of that room, with a cut on his head. This step next door, like nothing. The guard entered the room. It was full of people and a lot of men started entering from the hallway. Pressed, the security officer threw himself out the window. He broke much of his body, but fortunately he was transferred to the hospital and saved his life.

Already at the hospital, the man told his story. Authorities sent a cell phone to the hotel. But the cops didn't report any kind of information. Fire personnel were also present at the site and did not find anyone at the hotel, not even the cops.

The investigation reached an old man from the place, the testimony of the old octogenarian left them all ice cream. It was the year  1936, when Mr. Eustaquio Gutierrez  came to these lands, no one knows how, but in a matter of months he managed to knead a huge fortune.  His intention was to install a holiday complex, advanced for the time. It was widely supported by the community, except for a group of families who were intended to strip their lands . Apparently they had bought the place years ago, but they had been tricked. Eustachio sought to solve the conflict, but it was in vain, they did not give their arm to twist.

One night, and on the excuse of reaching an agreement,  he summoned the families to a meeting at the ranch of one of his farms . The families came all together and they were awaited by a hearty banquet with lots of wine. Hours passed and the host did not arrive, the spirits were warm and began to discuss their future. Screams prevented them from hearing the horses approaching,  a police game broke through the two doors and clean palazos made them shut up. When all the adults were dying, Eustachio got out of his car, approached him a heavy axe that I watched carefully, pointed to one of the men and dragged him to the palenque , dropped the axe violently, spreading his brains all over the place. Screams and cries became unbearable, one after another were killed with inhuman coldness, women and children included.

In the morning he took one of his tractors and threw the bodies into a mass grave . He seemed to enjoy it. The old man's astonishing testimony was corroborated by the authorities, when they found the grave containing seventeen bodies in total.

However, something did not match.  Although they were all corpses stripped of meat, six of the remains were modern, only three months old. Expertise confirmed that the remains belonged to the missing persons.   The place was closed, but in the months there was already talk about a new inauguration. At that time, the security guard decided to take letters on the matter. One night he took a fuel can, went to the place and set the hotel on fire.