The Santa Fe town of Godoy had historically the legend of a treasure. You're not gonna believe what they found in this town. 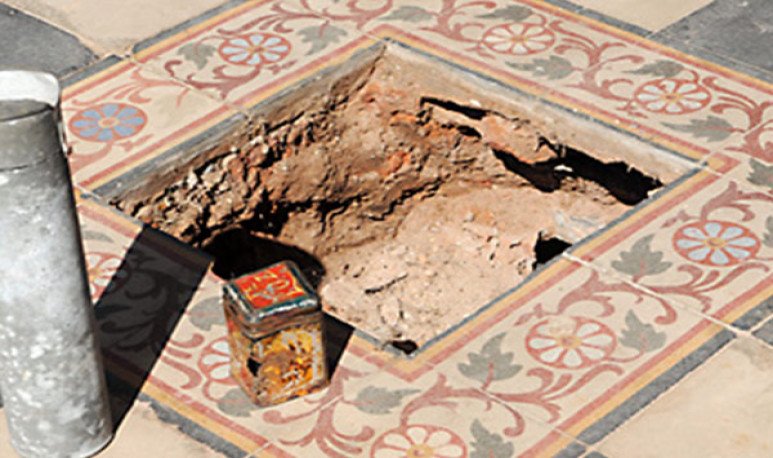 The municipality of Godoy is a town located 55 kilometers southwest of Rosario, in the Constitución department. Among its inhabitants, even today we talk about the historical discovery produced in November 2011 at the very entrance of the Italian Society. It has to do with  a legend that always existed in the village : the existence of a hidden treasure.

At that time, buried just under a meter, they found a zinc tube with a parchment and a tin box containing 56 medals alluding to the foundation of the institution.

The find has huge dimensions for the village, because it is part of an urban legend, it became reality. “ Written nothing was left, everything was passed on from generation to generation . The story that was told was that in a place on the front of the Italian Society, where a series of mosaics of different color were located, the founders of the entity had left a legacy. That was always said, but nothing was never done. It looked like an urban legend. That was never given the importance she had. I was always linked to the Italian Society because we had a vocational theatre group and it started with this theme again when we assumed in 2009,” the newspaper Rosarino La Capital told the communal president.

The Italian Society of Mutual Relieving, like the Spanish Society, accompanied the growth of the town, which expanded like so many villages in the province to the shelter of the boom of the railway. In fact, the  village of about 1600 inhabitants was founded by Ramón Godoy, a high-ranking officer who was sent to the area by Juan Manuel de Rosas himself, on October 6 from 1886. It was the time when this means of transport was expanding throughout the country.

One day a local journalist very interested in doing the investigation arrived in the commune. He asked the communal president if he didn't think it was a good idea to open that place, dig and see if there was really something. They spoke to the commission, there was agreement and with one of the founders grandchildren, architect José Landini,  proceeded on the afternoon of November 19 to erect the mosaics.

It was raining that afternoon in Godoy. Many neighbors had approached the entrance of the collapsed house that houses the Italian Society's facilities. A large space of black and white mosaics protect in its central part a square of 16 other patterned mosaics. There, the bricklayer Victor Romero proceeded with a grinder to remove the four central tiles and  shortly digging, at 17.25, the first finding was produced : a tea box brand Light, collapsed and oxidized, containing inside 56 medals alluding to the laying of the stone fundamental of the institution.

The surprise didn't end there. Exactly 59 minutes later,  at 18.24, there was a finding of a zinc tube about 50 centimeters high sealed with welding.   Inside, a parchment that ran a sad fate, because when it came into contact with the air practically disintegrated. “The scroll could not be deciphered because it was totally deteriorated so we could not know what the message was. We are talking to some museums to see if you can recover something from this testimony and see if the number of medals found has to do with the number of founders or with another question,” they explained to the media.

Godoy's story is rich.   With this finding, getting to this town in Santafesino has an extra seasoning .