United, solidarity, always in the family, dolphins have a particular origin, according to the Selk'nam people 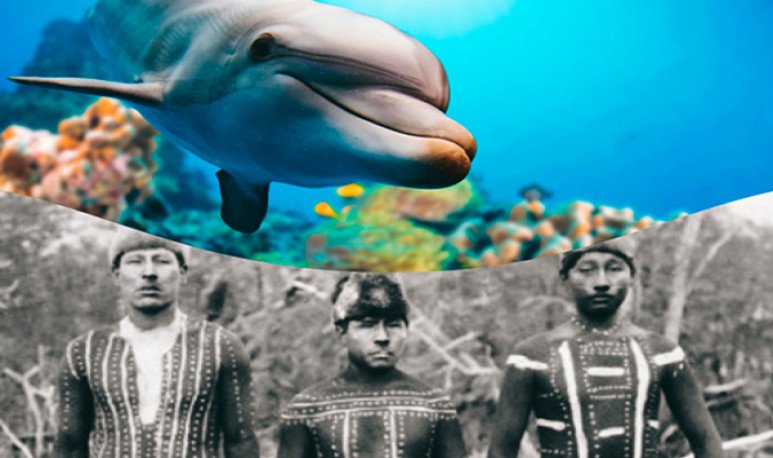 Dolphins  mobilize together to help each other. The Selk'nam explained the reason. Depending on who count it, the origin of that species may vary.

The  legend  selk'nam   tells that, a long time ago, the inhabitants of what we know today as  Earth del Fuego  were engaged in hunting and fishing to survive. Some were more docile to get food at sea and others on earth.

But everything changed one day when   heaven  began to roar and the earth rumbled like it had never . The roar was repeated several times and the anguish invaded the families. While some thought it necessary to enter the territory, others assured that it was best to go towards the sea, while another felt that nothing needed to be done, because it was a storm that would eventually end.

There was a family who decided to get into the water, but one of its members didn't know. He wanted to stay on earth, but they almost forced him to dive into the sea. Among all they helped him stay afloat and gradually lost his fear and stopped needing help.

The sky continued to roar, but suddenly the sea began to retreat, until a huge wave began to approach the coast and swept away everyone who had stayed.  In a matter of seconds there was nothing left, no one left.

The family, from the sea, witnessed the tragedy  and they all felt so sad that they decided not to return to the mainland.

That's not the only version of the origin of dolphins.

There is another story that tells that a Selk'nam family was captured by invaders who had arrived in  Tierra del Fuego  . Corrupted by ambition and greed, they plundered and destroyed everything in their wake, and took prisoners whom they met. They got on a boat and locked them under the deck.

The family was very close and at all times sought a way to escape from their captors.  When the invaders fell asleep, they peered through one of the ship's openings and, with the help of the moonlight , realized that the ship had stopped on an island, with large rocky protrusions on the edge.

They quietly managed to reach the deck of the boat and began to throw themselves into the sea, until it came the turn of one of the members, who recognized that he did not know how to swim . He asked them to leave him, but they got on the ship and threw it into the sea.

The young man began to sink and among all they managed to get him afloat. They helped him stay on the surface and gradually lost his fear, until he could feel comfortable in the water.

The family continued to escape, but they spent so much time swimming to return home that their bodies were transformed: their legs and arms turned into long, agile fins, their faces lengthened, and on their backs emerged another wide dorsal fin . All this allowed them to swim faster, in addition to spending more time under the surface.

Now they were dolphins and they felt completely comfortable in the water. Even though they managed to reach Tierra de Fuego again, they never wanted to leave the ocean again.

Two different stories about the origin of dolphins, which coincide in union, solidarity and family love so that the other does not pass through life alone.