A day like today, but 66 years ago, a great Cordoba was born. A legend that would mark in the history of football a before and an after. Do you know who it is? 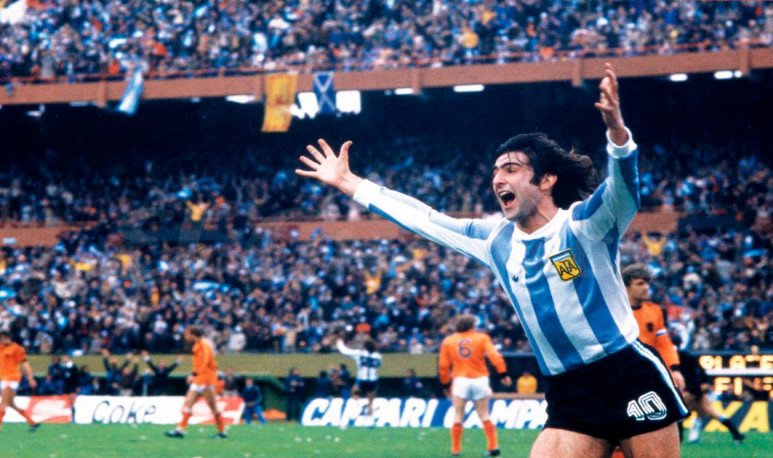 El Matador, Guaso, Panzón, El Famoso Cordobés or La Leg Left de Dios are just some of the nicknames that this great football player received. Have you noticed who we're talking about? Mario Alberto Kempes himself is the player who was born a day like today. On July 15, 1954, a star of Argentinians' favorite sport came tothis world.

He was born in southeastern Cordoba, in the city of Bell Ville,and soon became a player. Thanks to his tactics and his intense connection with the team, we raised the cup in 1978. He became thewinner of the Argentine National Team, top scorer and best playerof the World Cup.This tournament was the one that would bring him to eternal glory and together with him, to all Argentines . And I would give him international recognition. However, it was not the only time he had a great performance.That same year he was named the best player in the world and awarded as the best South American footballer by the Venezuelan newspaper El Mundo. Do you want me, Ma? He also qualified Best Player in Europe by receiving the Gold Eleven .

Undoubtedly, the trajectory of Mario Alberto Kempes is impeccable.A life worthy to be remembered and revered . He is one of the great Argentine players in history. He is part of the Valencia CF Hall of Fame, as he was chosen by IFFHS as the 6th best Argentine player of the 20th century.

This great was born on July 15 from his mother's tummy. But later on, he was born again, as a football star, from Talleres de Bell Ville. It was thanks to a neighbor with contacts that he got him a test at Instituto de Córdoba. This fact allowed the world to know the talent of the Panzon.And it would leave us an anecdote illustrative of the personality of the player.

Mario Alberto Kempes undertook the journey from Bell Ville to the club of Alta Córdoba to try himself on the team of coach Armando Rodríguez. DT asked players to present themselves with name and provenance. And Mario Alberto sent one of his.In keeping with the orders of his future coach, he proclaimed :

- You don't know a certain Kempes who lives there and they say he's very good? They ask for madness and think it's a freak.

So Mario lied in his test, as coach Juan Carlos Miret did not trust recommendations like that.

The beginning of a legend

In the first 15 minutes this “Carlos Aguilera” scored two goals , left all without a doubt that he was the best. And they hired him immediately. His father wouldn't let him leave his studies or his homeland. So El Matador traveled to the city of Cordoba to train. Along with him, the red albirrojo became champion of the Cordovan league after 7 years of defeats. His bloated dubbed him the Superpybe. With La Gloria, Kempes scored 78 goals in 81 matches.From there the story is told by all the media and those who saw him throw his magic on the court . The Superpybe became a national idol.

His first debut was with Newells Old Boys, then played at Rosario Central and crossed the puddle. Directly to Valencia C.F of Spain, where he spent seven seasons. He also wore the millionaire River Plate and other international t-shirts that welcomed him as the legend he is.

He played with the blue and white between 1973 and 1982. He had 43 presences and 20 goals scored . In addition to having footwear the World Cup and make us scream the most sensed goals. With the Argentine National Team , he also appeared in the 1975 Copa América. And in the world cup editions of 74, 78 and 82.

After his retirement, he continued to live for and for football.He had his coaching stages and, currently, he plays with the driver of different sports programs.Mario Alberto Kempes is the name of the largest stadium in Cordoba. In his honor, the best monuments are erected . In their gambeta they take the best memories.

The mystery of the Firmat hammock