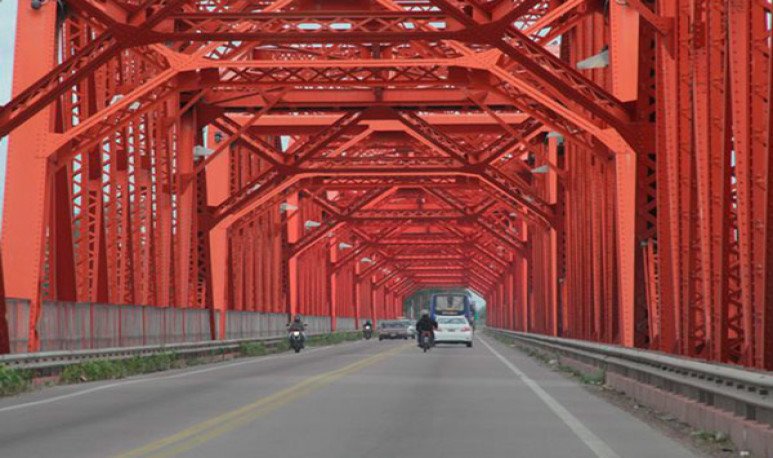 The Carretero Bridge,  which links the capital of  Santiago del Estero  and  La Banda  and which was declared a National Historical Monument,  has a legend  that persists in the people of Santiago since 1927. The real and the mythical are intertwined in this story. This is the  golden pin on  the emblematic Carretero Bridge.

History tells that, in the construction of this bridge, was in charge of foreman  Salvador Catalfame. The Italian arrived in Santiago del Estero exclusively to take charge of this work in the early 20s. The bridge was managed by the presidency of Hipólito Yrigoyen, the governorate of Manuel Cáceres and by an important railway company. On the other hand, there is a version that says that this work was donated by the German government, as an act of reparation to our country, since during World War I the Europeans would have confused two Argentine ships with those of the enemy and sunk them into gunfire. This latest version is established in the community of Santiago as another myth of the many versions that are told in that province.

But the most outstanding legend in this story is about the golden pin. The community of Santiago del Estero tells that the foreman placed a golden pin when the work was being built in 1927. Their place would be strategic and should be “screwed and forgotten”. The secret of where it is located would remain until today, as at that time the workers of the work, who knew where it was located, swore to take the secret to the grave.

Some people say that many people have tried to locate it, and that some fishermen would have already found it; others comment that a person found it, and overnight he increased his wealth as a magic. As you can see, there are several versions about the golden pin, but the truth is that this golden piece is part of the  folklore  of the Santiago community.

Of course, the relevant authorities checked in the book of the National Directorate of Bridges and Ruhr's inventories if there is this golden pin on the Carretero Bridge in Santiago del Estero, but there are no clues to it. However, this legend was sustained over the years, as a story rooted in local folklore. We can also relate it to the song by  Carlos  and  Peteco Carabajal “Desde  el Puente Carretero”, which has become a classic of the  songbook  of santiagueño.

Finally, we invite you to warm up the water and prepare some rich mats so you can enjoy this beautiful song. We attach the lyrics as a perfect combination for the start of your day.

From the road bridge

If you pass through my province

with your family, traveler,

you'll see how nice the river is

from the road bridge.

It is the birthplace of my memories,

between Santiago and La Banda.

It will be the road bridge

that cuts the way

to reach the arms

where a love awaits me.

You will find in my land

so that you will never forget

Do not forget, traveler,

what my countrymen feel,

I'm sure they must love

a brother as they love.

And when the night comes

you spend looking at the river

I'm sure some gold

kisses with the dew.

from my naughty heart

tickles me in my soul when the