Home People Urban Legends The Legend of Cardón: a love and strength of the Pachamama

A Tucuman legend in the heart of Amaicha del Valle contains a mysterious story. When you visit these valleys you will come into their protagonists. 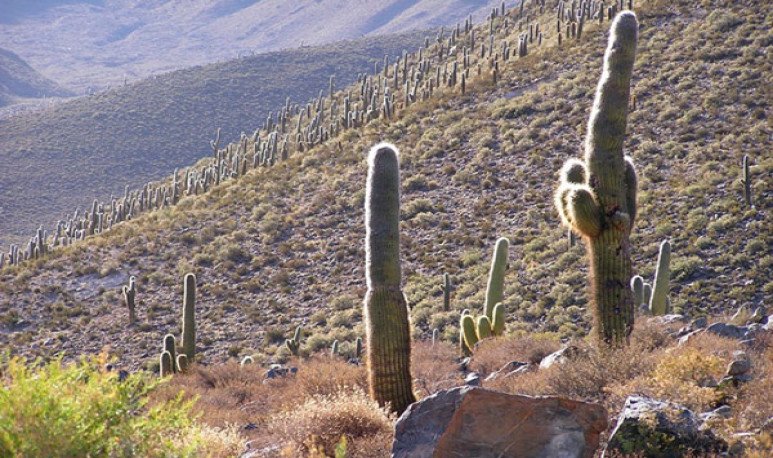 The legends of the valleys of the north of our country are undoubtedly the most attractive.Many of them prevail in time until today, as is the case with the  legend of cardon , which comes from Amaicha del Valle,  Tucumán . The cardon is a tall plant, green, with thorns, which is located in the valleys of this place. A love story embraces this Tucumana legend, which has as protagonists Kewayl Amatua and Pascana, who loved each other madly, but could not be together.

The Aymaras commented in those times that a fight between chiefs separated the community on two sides for this forbidden love. One night, the  lovers  decided to escape and the warriors of the tribes chased them so that they were not together. They both begged the devil to hide them, but the price for this favor was very high: it consisted of making them invisible in exchange for their souls.Since they did not agree to the pact, Pascana prayed to the Pachamama and Mother Earth listened to them. He took Kewayl and turned him into a cardon and inside him put Pascana with the order that he never leave there. That is why the cardon grows strong and prickly as a symbol of protection to his beloved.

It should be noted that there are other versions of the legend of cardon  in other provinces, such as  Salta  and Jujuy. What these stories have in common is that the Indians were turned into plants, into cardons, but they do not agree that it was a love story, but rather the legend of these provinces tells that, in times of the conquest, the Incas, seeing that the Spaniards, began to dominate and martyred their peoples, sent their people to different parts of the valleys to defend their lands.

These were messengers who had been ordered from their superiors to hide in key points so that, once they made the enemy visible, they communicated to their companions of the time of the attack. Some stories argue that the chieftain had informed his tribe that they had to defend themselves and defend their lands because intruders were approaching. We had to look for the highest hills where you could see the arrival of the invaders, it is there that they divided into groups that were located in the hills and mountains to wait for the enemy.

The rest of the Indians were still waiting, they did not understand why the order of the attack did not arrive, time passed and observed that European troops entered their lands and advancing, and they could not attack without the previously established order.What had happened was that the Europeans had captured the messengers and that is why they had not managed to warn about the attack. It is then that the Pachamama, observing everything that was happening, was numbing the Indians, turning them into plants with thorns to what we know as cardones. In this way, Mother Earth made them part of it.

In the stories that are told to children from the first years of primary school in the north of our country, they say that both in Amaicha del Valle as well as in Salta and  Jujuy  the Indians they were turned into plants, these are strong, tall and full of thorns, these thorns were laid by the Pachamama with a purpose, so that no one would disturb the eternal sleep of these Indians.

At present, the cardones are still there, both in Amaicha del Valle, and in the hills of Salta and Jujuy, which ensure the happiness and tranquility of their inhabitants and, in turn, watch over intruders who want to harm nature or take over those landscapes.