Kurupí: goblin satyr present in the rural imaginary of Santa Fe, through the legacy of history. 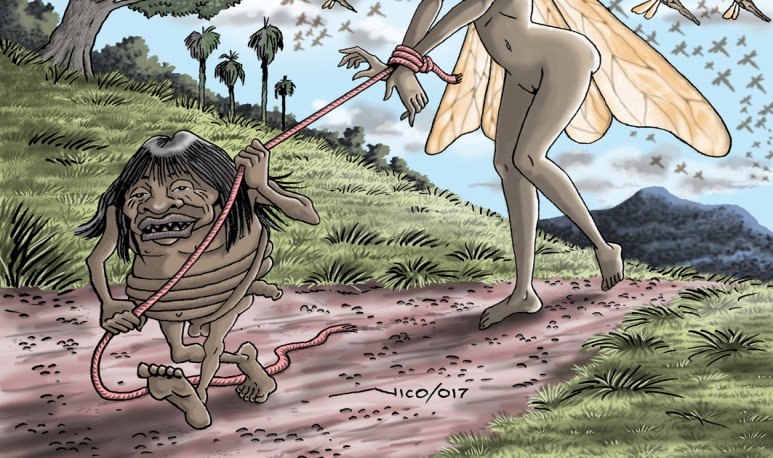 To tell the legend of the Kurupí goblin I want to refer to  one of the great cultural heritage that Santa Fe has: the work of the Jesuits . Present currently in their temple and school in the historic center of the provincial capital, these priests keep a huge cultural heritage that dates back almost 500 years in our region.

Among the studies that remain available is the work of Jesuit José de Anchieta, a remarkable naturalist. In his research he alludes to Kurupí, a devil of the Guarani. He is a small man, scaly leather, pointed ears, who has the particularity of having his feet back: he advances with his heels. But its main feature is your virile limb that goes several turns at your waist  and with which, from a distance, you can pregnant a woman.

Kurupí steals creatures . Better, if they're female, it also kills the unsuspecting hunter who won't let him hunt.

With this elf, the phallic myth of the Guaraní was installed  , symbol of abundance and multiplication of the species. Lust is a feature of the human being, which does not go into heat seasonally like animals, but lives permanently in mating attitude. The moral barrier imposed by our values has allowed a coexistence of respect. Modern men and women are guided by moral rules that abide by, creating a scale of values that are very useful to their social life.

Kurupí was a resource born with the arrival of Christianity, where the rigid moral rules of the new religion were mixed with ancient mythical knowledge . It was used by mothers in the Guaranitic area to avoid children of single mothers, or to curb liberal girls who would otherwise carry with large offspring without a father to take care.

This Kurupí of Guaraní origin, but  present throughout the northeast and Argentine coast, has its equivalence in the Greek god fertility . This god called Pan, had horns, ears and goat paws. Therefore, he ruled the lives of shepherds and goats. His ugliness made women, especially nymphs escape him. Pan, knowing the weakness these deities had for music and dance, built a flute of reeds, with which he seduced them by performing unparalleled melodies.

In the Guaranitic world it is said that Kurupí has the phallus so long, that it rolls it at the waist. With it you can attract from a distance women to pregnant them.   He is described as a young, hairy, short man who wanders naked in his nap through the woods, looking for girls who walk lonely, to placate his lust. Campesionas mothers in the interior still tend to scare their daughters from venturing alone into the jungle. If they met Kurupí, they could get pregnant, and if they manage to escape the temptation that makes them obscene from the ramazones, they lose their mind, having from that moment seizures of epilepsy.

The elf is clumsy to move, therefore it is claimed that it is very easy to mock him, and that, in addition, cutting off the phallus becomes harmless. It's easy to mock him by climbing to a tree, because he can't climb. He can not swim either, or he does it with a lot of difficulty. In this version it is anthropophagus,  preferring the meat of children and women.

The idea of this note was to describe an ancient legacy of Jesuit research. The legend of a leprechaun that only some remember in the interior of Santafesino, but with which it is convenient not to meet.