We invite you to discover the history of this castle where amazing parties were celebrated. The opulence and luxuries of these celebrations became legend. 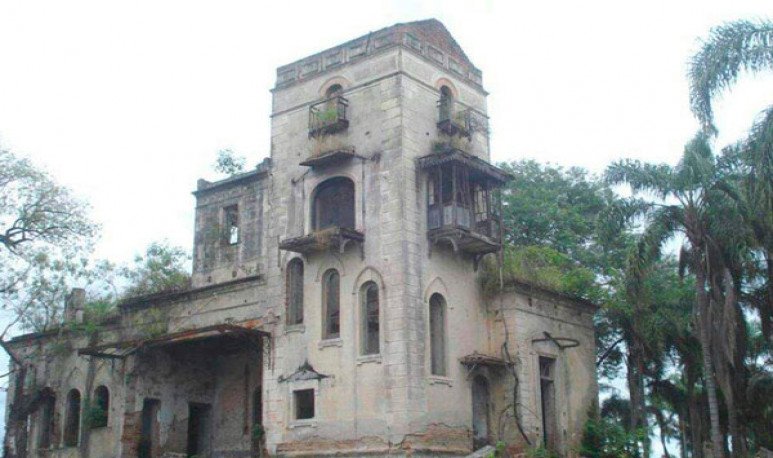 Near Simoca and the Colorado River, there is a majestic castle, located in the area known as La Junta.  A building from yesteryear that was inhabited by a wealthy Swiss German businessman . Legend has it that, in the first decade of 1912, Don  Otto Ruckaeberle  had the country residence built as an  offering for his beloved.

It all started on one of the trips of Don Otto, who had the habit of frequenting cabarets. On one of those nights he met a woman and fell in love deeply.The young woman agreed to live in Tucumán  on the condition that she would find a perfect place where she could build a house surrounded by three rivers  . The area is known as the Junta because over time it turned it into a small island, although it can be accessed without crossing the river.The property was called  El Castoral  because in the area was cultivated the beaver or tartago from whose seeds he extracted an industrial oil that Don Otto sold to Europe.

As was his custom, for the inauguration of the  castle  Don Otto prepared a  splendid party where he spared no expense , including Italian chefs and a Spanish orchestra and another Buenos Aires.  The party lasted three days  between luxuries and countless boxes of champagne  with guests who came from various parts of the country and the world.

This was the beginning of a series of celebrations that would be held daily in that lust plagued residence.  The continuous entertainment attracted the attention of the inhabitants of the area.  It is said that the chandelier hanging from the main hall is currently in the White Hall  of the Government House of Tucumán Province.

In 1914, while another holiday was being held, a group of collectors from the bank came along with the police to ask Don Otto to to pay for the land. Besieged by debt he fled, although there are other theories that claim  that he left that majestic house when his beloved decided to leave him, bored with life in the South American countryside.

Over time, the castle had new owners, who decided to give life to the property by returning to the celebrations whose guests were  all the people around the area . They say that when the structure of the apartment began to be damaged, people did not attend any more.At that time, tourists and curious came to the residence and took away everything they found of value, for example, pieces of marble floors, mosaics, among other things.

This castle is enveloped by all kinds of  mysteries, such as that of  “the dead gringa” , a beautiful young guest to one of the many festivals celebrated there that drowned in one of the many places.s. Some claim that it  appears and disappears floating through the waters . The fishermen in the area take the legend very seriously and, every time they go to their activity, they ask “la gringa” to help them with the riot.

Today it is an interesting route that can be reached leaving Route 157 at the height of the Colorado River, in the department of Leales. The authorities have tried to restore it, but the high price of the spare parts left the proposal unfinished.

100 years of  legends that the inhabitants have managed to encourage make this hidden castle an  irresistible adventure  for all who wish to take a walk through Tucumán.