We tell you the legend of one of the most frightening characters in the neighborhood Güemes. That, to this day, is still terrifying anyone who passes through the area. 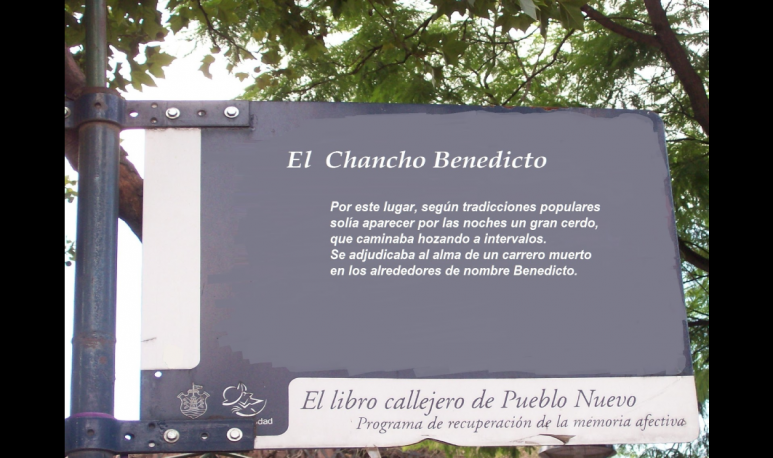 The legend  of Chancho Benedicto  is one of the pillars of the culture of the neighborhood of Güemes, a neighborhood that houses the Paseo de las fleas and a very original worldview with respect to every corner of the city.  There is not much information about  this legend, only the  mouth of mouth  that reaches our ears and makes us erise our skin. That is why  the Cordovan writer Silvia Magaña Martínez  decided to make a  story based on real stories  . Collecting those stories that  tell those who tell  that they saw Chancho Benedict...

Those who know that at the intersection of San Luis and La Cañada streets, a place that is now known as Güemes, appeared  a very particular ghost.  The specter that some baptized as  “the shancho Benedict.”  It was a huge animal that frightened the area. The pig in question appeared out of nowhere and was lost among the scrubs  without leaving a mark.

The days of the carts ran and the nights of the Pueblo Nuevo neighborhood transformed into the perfect place for the demons. Deep ravines, scarce light of lanterns and a stream full of vermin collided  the perfect recipe of exquisite legends.  Every corner had some beast that was hiding in the form of some innocent pet.  The farm  of the averno was born there and soon  would throw into the world his most beloved creature.

In those days , merchants  went from there to here, offering products of exceptional virtues. Horse-drawn wagons moved slowly, taking advantage of the breaks that the proclamation and customers required to run agnally under the shade of a tree. A tide of women eager for commercial novelties came to the so-called, stirring imported fabrics, ointments that cure asthma and tonics for  all kinds of diseases.  Perishable foods such as  artisanal cheeses and home-made wines were located in a special sector  of the traveling sideboard.

Benedict, connoisseur of traveling art, knew the weak point of the dealers.  With a flattering tone and a little cunning for business, he sold with the same enthusiasm both virgin chicken eggs and any of its most precious products.

In a worn notebook, the merchant  religiously wrote down the data of the trust  and the characteristics of the items he would bring on his next visit.

Benedict was patient and pleasant talk who enjoyed dealing with people. No one who knew him could imagine  how close his jump to fame was.

A full gallop horse appears abruptly, dragging everything in its path.  He moves wandering   like a soul that carries the devil through the streets.  He pushes a cart Benedict is trying to control. The images of the scene last for seconds that for the merchant become an eternity. Perform desperate maneuvers that make the situation worse.  The animal is taken out, possessed of an unknown fury that only calicanto manages to slow down.

The coup was brutal and accurate.  The bastard's life ended up scattered on the floor.

It took a few minutes for  a morbid crowd  to cordon the body. Sentinels who refuse to abandon the deceased are observed to heaps. Everyone knows that the end is Benedict, so  the news ran like gunpowder in the entire city,  creating an impregnable human wall.

Human spoils lie scattered everywhere  while spectators  improvise a wake.  Rumors are constantly heard that answer questions no one asks. They remember Benedict's wanderings, how good he was. A saint, some say.

While awaiting the arrival of the authorities to collect the remains, one of the spectators discovers with amazement  the terrifying look of the merchant.  His eyes seem to come out of orbit and a  grimace of horror completes the Dantesque picture.  Automatically, everyone makes the sign of the cross while one pity by lighting a candle.

The days pass, but the versions of what happened are increasing in an unusual way.  The locals  sensed something strange in the environment that  gave bad thorn and germinated in the collective mind.

As was customary, an altar of the dead was placed at the site of the accident that the neighbors frequently visited. So far people came from the different neighborhoods to honor and pray prayers. For questions unknown at that time, the new spiritual posta was filled with frightening.

The face of dreadfulness

The overnight people who were circulating in the area appeared  a being in the form of a pig that followed them.  One of the many who told his testimony states that when he passed by the cross of the late he felt  an icy breeze that invaded his body.  Immobilized by a huge force, the man first thought that it was a cutlery who harassed him in the shadows, but when he felt  the animal's bufido he knew it was in the hands of the devil . That was the first time  someone related Benedict to  the pig's ghost, because at the end of the story he claimed to have seen  the same face of the merchant in the form of a chancho.

Since the protagonist was a known drunk, no one wanted to take him the note. It wasn't until  a religious woman confirmed the story that legend gained strength.

She says it wasn't night but quite the opposite. The first rays of dawn were rushing to leave when he decided to go to rooster mass. He walked along the margin of La Cañada with the idea of praying our father to Benedict. She was kneeling when she felt  a presence behind her back.  He turned his head, but  there was nothing.  He tried to calm down and resume the prayer, but it was impossible.  An animal petting was heard loud and clear.  The woman gathered strength to face the darkness. He got up from the floor to turn around. Since there was no one near him, he set his way to church. She took a couple of steps, but she had to slow down by the presence of  that damn pig who looked at her with contempt. It was him!said the unfortunate.

Thus, the stories of a diabolical presence in the place spread all over the corners.  The new mascot of hell was loose and was baptized as the cancho Benedict, the same as in his human figure hid the ability to become the  animal he desired.