“Is he a messenger from God?” , ask the locals of Banda Florida, where the child who grants miracles was born. It is one of the most commented urban legends in La Rioja. 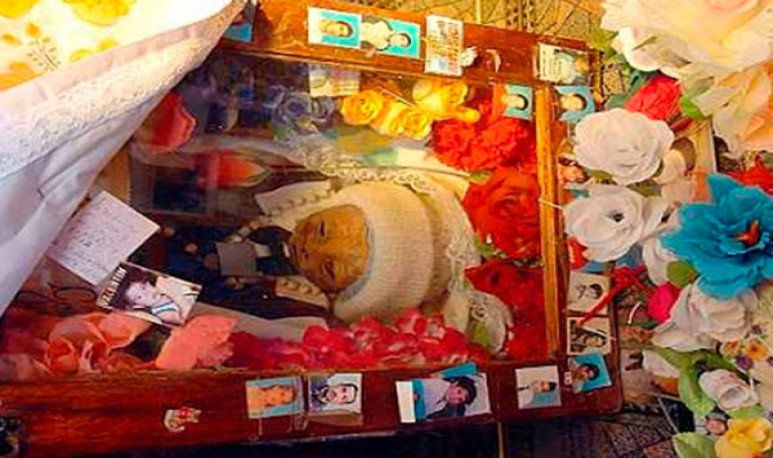 In every province of our country there are legends that have as protagonist the Devil, as well as God, in this case, in the city of Villa Unión, 270 kilometers west of   La Rioja , villagers wonder to this day if  Miguel Ángel Gaitán  is a child sent by God, as he performs miracles after his death, and so in this province they call him the “El Angelito Milagroso”.

The boy from Rioja was born in Banda Florida on July 9, 1966, was the son of Argentina and Barnabé, and number 12 of the family. When Michelangelo was about to turn one year, he died of meningitis when he was transferred to Chilecito. Then his parents immersed in pain buried him in the cemetery of Villa Unión, once again hit the sadness to the Gaitan family as the parents of this child had lost other children before.

Urban legend has it that miracles began after a storm in 1973, seven years after Michelangelo's death. According to the locals, the family of the little baby and an employee of the cemetery, found the destroyed mausoleum, where you could see the remains of the baby intact, to the surprise of many, since it had passed seven years after his death. Then he rebuilt his niche, and soon again appeared removed from office without explanation, and it is at that time that the child's  family  understood that he wanted be discovered.

Miguel Ángel's sister  Cristina Gaitán  told the Rioja press on several occasions that her mother and father told their neighbors that the niche collapsed and the little little box was left on the powdered bricks, and again they built it and appeared again destroyed . Once they went to the cemetery and saw that the cover of the coffin was running and the baby's face could be seen, it looked like a toy drink, it was intact and even had a pacifier on, Cristina reminded the press.

Once the Gaitán family understood and decided that Michelangelo's niche had to be discovered for the little boy's face to be seen, the  story  was told throughout the village and people began to leave letters to them by the side of the coffin, they also approached and touched their forehead. As the remains of Miguelito (as they also call it), he began to deteriorate with the passage of time when he was in the open, they put a glass above the drawer and the people of faith now touch the glass at the height of the little boy's forehead while asking for his miracles. Currently, you can see your face dry over the years, and it also seems to be mummified.

The orders in the letters began to be fulfilled, then people left them notebooks and over the years the offerings began to triple, and not only  Riojans  come to ask hard-to-fulfill wishes, but also many from other provinces. They even arrive at the cemetery tours organized to visit the “Angelito Milagroso”, it has also been commented in that province that Ramón Díaz, when he was a River coach, wore him a shirt signed by all the players.

For all the letters, toys, baby clothes, photos and flowers received by the miraculous child, they had to build a new mausoleum, a larger one, with an adjoining room and another upstairs where they keep all the offerings that come from the various provinces of our country. walls, more and more add thank you plates.

Taking into account the  miracles  granted, a few days ago on social networks a post was replicated in a local newspaper where he comments that Miguel Ángel fulfilled a request made to him for the health of a man who had been diagnosed with a malignant tumor in the gallbladder, they asked the child to do the miracle because this man did not want to suffer from this disease, then they asked “Miguelito” that when this gentleman is done the second study, the tumor does not appear and when did the tumor had vanished and to the surprise of many, on the plate it was shown that in the place where the tumor was located appeared the face of a child where they think it is the face of Miguel Ángel Gaitán.

A messenger from God?

The inhabitants of La Rioja comment that there was never an explanation as to why Michelangelo's body has been preserved to date, as mummified, without receiving any treatment. In this regard, the priests of the village where the little one was born argue that he is an envoy from God so that religion and faith will not be lost in that province. For all that happened, by the miracles granted, the child is revered and respected.

Cristina, the sister of the miraculous baby said that when she goes to the cemetery to visit him there are always people praying, asking for miracles, putting flowers of all colors in her coffin, and even during the quarantine she was able to observe people lining up to reach and touch the glass that protects the face of small, and claims that it is a constant pilgrimage.

In addition, she told the local press that while she has no memories of her living brother, she maintains a special bond with him, and claims that when she is alone near the coffin while accommodating toys, and offerings, she turns all the toys fall off; and some time ago she had been taken a ball and she kept it in a specific place and then appeared in the hallway mysteriously, that is why Cristina argues that her brother plays with her, sometimes.

Finally, regarding miracles, Cristina argued that everything that happened and continues to happen is very nice, that she with her brothers feel very happy and satisfied because thanks to Miguel Ángel many people are fine and that makes them happy. And he believes that miracles are done by God through his brother.

In this way, because of the faith that the Riojanos have to Miguelito, every 9 July, the date of his birth they perform a mass mass and prepare hot chocolate for those who attend this moving meeting. The toys that are very many, are donated to schools and neighborhoods in the area, as well as clothes for those low-income children. As for the mass, the locals argue, they perform it for the date of birth and not for the date of death because for them Miguel Ángel Gaitán is alive; so they feel it, so they remember it and so they worship it.

Undoubtedly, the story of  Miguel Ángel Gaitán  is one of the urban legends that impacts, touches and made faith reborn in Banda Florida, La Rioja, and in the rest of the country.