A young Entrerriana put the imagination of the internet to the test and challenged to look for Maradona's silhouette in a video. 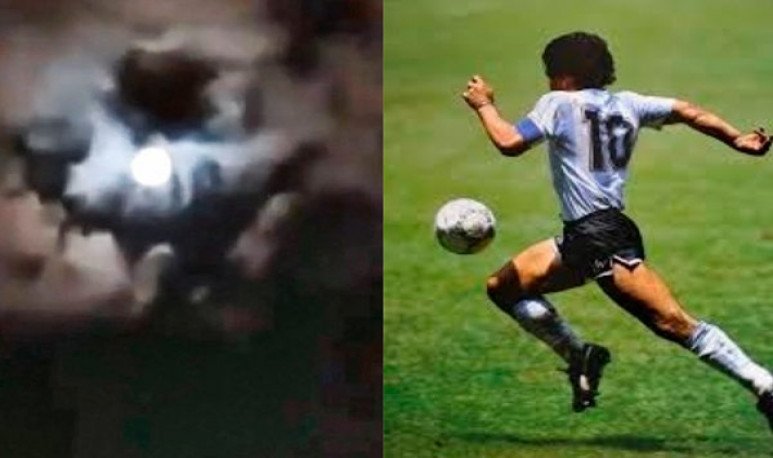 Say what they tell us, each of us will see what we want and can according to our perception. In this way, longings, fantasies, terrors, feelings and illusions are also part of the composition of an image.  We do not intend to give a cheap class of psychology, but to present the unusual event that took place in the city of Paraná at the end of November . It all began after  the death of  Diego Armando Maradona  , which shook the country and the world with enormous sadness. Countless times the star was compared to god, so his farewell did nothing but stoke the mystique. Such was so, from above they also wanted  to honor him .

“We're not going anything, they kick us out,” says the song we use to make a little quilombo. And diego was so Argentine that he obviously didn't want to leave us easily. Or at least that's what  Natalí Ríos  wanted to reflect with a  video  that generated stupor among the virtual audience.  There, the girl showed what seemed to form the figure of the star with the number 10 on her back . It was composed of  the dark night, the clouds and the moon . While the portrait was obtained from the window of his room during an early morning. However, he was only able to decipher it hours later with the help of a wake-up call

According to Natalí, she had spent that evening watching videos of  Maradona . He looked and looked closely at his summaries, his goals, his programs and even his quilombos. Until he saw how attractive the moon was outside and  decided to record it  for a while. She then uploaded the image to Instagram's best friends stories and followed her. The novelty came the next day when his friend wrote to him to tell him he was seeing  Diego .  Immediately, the fact became an interesting to believe or burst that aroused the intrigue of many . It is that the initial post then became a more extensive post that came to reach numerous likes.

The testimony of the young woman fleetly moved to other social media platforms and the word began to spread . In this way, it came almost to the  unanimous opinion  that it was indeed the silhouette of the former player. There were even those who thought to visualize the Ten celebrating one of the goals against England in the quarterfinals of the 1986 World Cup. While others said to discover Diego from the famous video of “My dream is to play in the national team and win a World Cup.” Whatever the guesswork has been thrown, the truth is that after the second of playback the appearance faded. Clouds followed their course and what happened turned into mystery.

Between myth and reality

There are people who don't believe in God, but they do in  Maradona  . The manifestation in the sky of the capital entrerriana will be subject to free interpretation. What is certain is that it will become part of the most popular  urban legends  of the Paranaense community.  The case went across the country and people went crazy about the story . Accepting that the best player in the world had match was not an easy task, so many chose to think that he wanted to stay a while longer.