Silver macá is a bird we can see in Patagonia. What is your story? 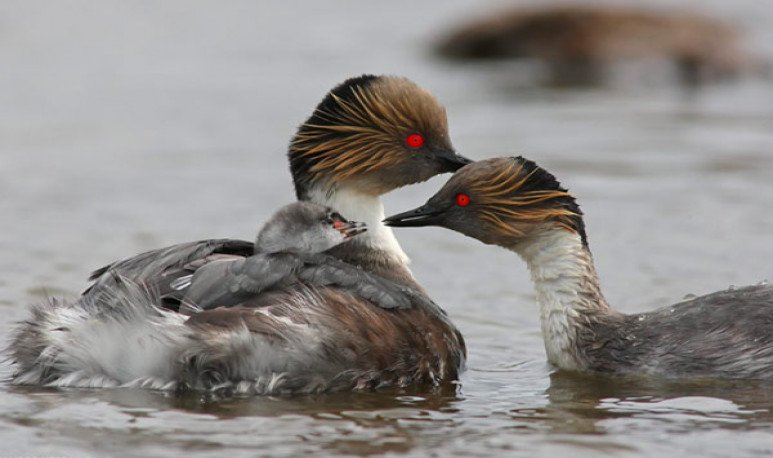 The  silver macá  is a small   bird    that can be seen in our   Patagonia   in the spring and summer months, which when the cold days arrive migrates north. They have very dark gunmetal gray beak and forehead, crown, beard and throat with a more ashy gray color. But we are not going to talk about ornithology, but we are going to go back to find out what is the origin of this species.

For this we have to go back to those times when the southern land was populated by the  indigenous t ribus , which installed their awnings along and across the southern territory. In one of these tolderías, located near  Lake  Nahuel Huapi  , lived the young and beautiful  Maitén who, as the tradition of her village marked, was engaged as a child to  Coyan , a boy from the tribe.

He loved her and she loved him.  But the beauty of Maiten caught the attention of the rest of the young people of the tribe, who tried to contemplate and admire it quietly, because loving another's wife did nothing but call bad fortune.

Maitén and Coyán spent almost all day together, laughed and dreamed about their future.

But things don't always go as you expect. There was one day when Maitén was on the shores of the lake without company and was seen by  two brothers from a Pehuenche tribe  who were dazzled with the beauty of the young woman. A moment later,  they both started fighting to see who was staying with the girl.

However, after a moment, they considered that two brothers should not fight and let a woman break their blood loop, rethink and prevented anger from invading them. That is why they decided that Maitén choose one of the two brothers and promised that the other would accept the young woman's decision.

At that time they approached Maiten, she was surprised by the presence of the two strangers, although she listened to them with respect. After the proposal, with the same respect he told them his decision, which did not include either of the two Pehuenche brothers: she was engaged to Coyán as a child and loved him.Fury again invaded the Pehuenches, who did not accept Maiten's answer, and swore not to give up to get their love.

After the young woman's rejection, they went to the abode of an old fortune-teller, who was asked to help them so that the girl who fell in love decided to marry one of them. The fortune teller tried by all means to make them understand that they were wrong and that nothing good could arise from an intention to harm the genuine love that Coyan and Maitén had each other. However, the brothers, invaded by anger, insisted that the old woman agree to their requests, and even came to threaten her. Before this,  the old fortune teller proposed to them to consult the god of the lake.  The Pehuenches agreed and the next day carried out the maneuver.

The brothers and the fortune-teller went to  Nahuel Huapi , where Maitén went every morning. Seeing that the young woman arrived, the men told the old woman to approach the young woman. She invited her something to drink and the girl, unsuspecting, drank and went into a deep sleep.

After this,  the brothers put Maitén into a boat and pushed her into the calm waters of  Nahuel Huapi  to know the decision of the lake god , without noticing that Coyán had achieved hold on to the boat to protect your beloved.However, the decision of the lake god was not what they expected:  the sky darkened and the Nahuel Huapi began to raise waves as the wind began to whip the Pehuenches.

As they suffered the fury of the lake god, they saw how a bed of earth opened through which water began to flow. Over there, Maitén and Coyán could be seen clinging to the boat in which the young woman had been entering Nahuel Huapi. Then the river and the boat disappeared, and calm back to the place.The Pehuench brothers, terrified and badly wounded after the rage of the storm, fled these terroirs in fear of the wrath of the lake god.

Coyán and Maiten, meanwhile, were taken to a magical land, where they lived happily. However,  legend has it that the lake god turned them into silver macaes, so that from time to time they can return to the place that saw them grow and witnessed their love.

Many say that even today Maitén and Coyán continue to arrive at the lake at sunset to thank the god, since that day they have not had to separate.