Home People Urban Legends Limay and Neuquén, united for the love of a young woman

The most flowing river in Patagonia is born from two chiefs who decided to end an enmity for the love of a woman. 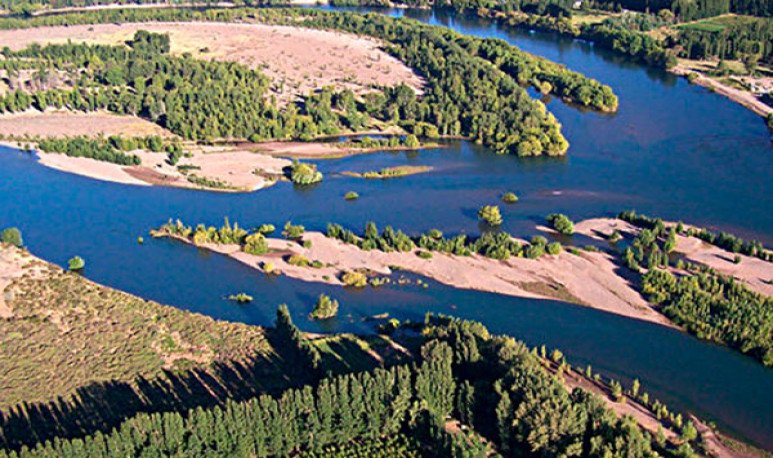 The Negro River is the most flowing river in Patagonia.   It is born from the confluence of Neuquén and Limay  to flow into the Argentine Sea, after touring the province. Ancestral beliefs claim that the union of both watercourses was given by two chiefs seeking the love of a beautiful woman.

Limay  and Neuquen were two chieftain friends.  One lived in the south and the other in the north. Hunting lovers, they carried out the activity together and then each returned to their homeland.

Things began to change the day when, as they roamed around a lake in search of some prey, they heard a beautiful melody and followed the sound until they saw a beautiful young woman, with black braids, singing with her sweet voice. They asked him what his name was.  Raihué was the response of the woman who fell in love with the two chiefs.

Nothing was the same in the relationship between Neuquén and Limay.  They stopped frequenting. They didn't hunt together anymore, and the strong friendship they had dissipated. The parents of both, concerned about the loss of the bond, decided to take letters on the matter by consulting an old machi who revealed the cause of the distancing.

While Limay and Neuquén already presented it, the  healer  confirmed that the love they felt for  Raihue was what was causing the enmity between the chiefs  and, in order to determine whon was worthy of the love of the young woman in black braids, they asked her what she wanted most in the world. “A conch to always hear the rumor of the sea,” was the woman's response.

It was then that  the gods turned Neuquén and Limay into rivers, so that whoever came to the ocean first would get Raihue's love.  The first departed from the north, crossing the myrtle forest, while the other began its journey from the south, running between valleys and mountains, both towards the sea.

The wind, witness everything and resentful because the girl had no eyes for him  and therefore not been taken into account to seek the love of the young woman, began to whisper to her ear that they would never return  , because the stars, falling into the sea become beautiful women who captivate men. Time passed and Raihué ended up convincing the words of the wind. That is why he went to the lake where he first saw Limay and Neuquén to give his life to the creator of the world, in exchange for the salvation of his two loves. It was so that  the young woman turned into a beautiful flower of red petals.

The wind, not according to what it had already done, went in search of the chiefs, who in vain continued their way towards the ocean. He began to blow so hard that he ended up changing the course of the rivers so that they converge into one. At that time they realized that the woman in black braids for whom they started their competition had died of distress, and decided to end the enmity to continue their course to the sea, in honor of Raihué.

Legend has it that river born from the confluence of Neuquén and Limay looked so sad and dark, that it was baptized by Curru Leuvú ( Rio Negro ).  They say that their waters whisper, although it is not always about laments, because sometimes the river sounds like the laughter of two friends who are having fun.

Today, the villagers pay tribute to this point where Limay and Neuquén join to continue their way to the sea, whispering, lamenting, laughing, being friends who met again.