Home People Urban Legends Legends: the souls in penalty of the Arroyo Lyes

50 years from the origin of one of the saddest Argentine legends. The accident over the Arroyo Lyes Bridge. 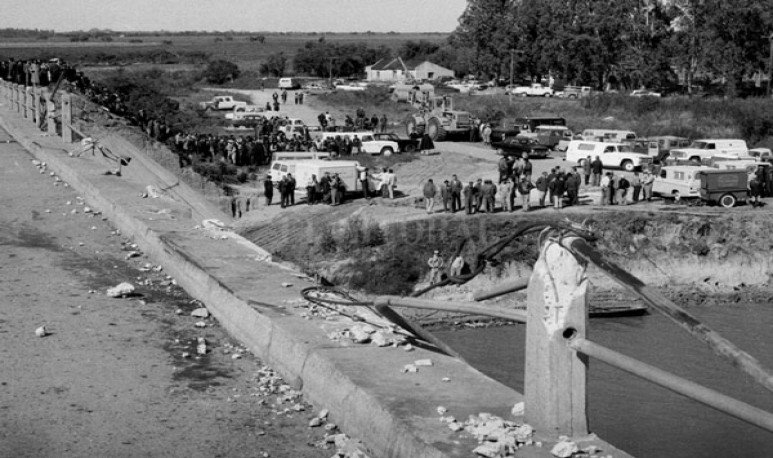 On November 20, 1970, the country's eyes sounded on the province of Santa Fe for a very sad reason.A striking accident road that starred in  an interurban collective as it fell into the waters  of Arroyo Lyes. The accident took the lives of 55 people and unleashed one of the saddest legends of our payments.

50 years ago, it was also  Friday .As usual,  buses traveling to the interior of the province made it full of people . Most returned to their payments after a week of study, work or other activity in the capital city.

That fateful afternoon, the Helvecia company's micro was speeding up Route 1 to the north.  Only ten were the Santafesinos who traveled to the coast. The rest were mostly residents of Santa Rosa de Calchines. They were also from Helvecia, San Javier and Cayastá . They were returning to their payments to spend the weekend with family and friends.The collective crossed the town of Arroyo Leyes. I was already about to cross the bridge to Los Zapallos. Suddenly, the unexpected. A breakdown? The giant, full of people, falls into the river. There are 14 meters deep. The clock is nailed into the liquid and brown thicket: 18.40, Friday, November 20, 1970.

Meters from the bridge,  a fisherman watches the scene and padders aboard his canoe to the sinking micro.  Of the 55 occupants  only six manage to escape through the windows  and are saved by said islero .

Voices that can't shut up

This story, in particular, has a happy chapter. Among the people he was able to save, this river man rescued a girl thrown out the window by his mother , who then persists and disappears. The one-and-month-old little girl floats in the river thanks to the rubber diaper.The “Tata”, as they called this hero, paddle and rescue her.

Since then, fishermen and neighbors on the bank of the stream Leyes  assure that in the evenings screams are heard from the river . Others even dare to say that they see silhouettes of people and that on full moon nights the chassis is illuminated from the background. It is that, as with these tragedies, many legends of Santa Fe are born with them.

The undeniable thing, because of the number of people deceased is that, when it happened, this accident was considered  one of the greatest tragedies in Argentine history . As for the province of Santa Fe, it has the number one ranking, with slack.

The comparison was made with  other tragic episodes, such as what happened at the “Gate 12” of the River Plate court where 76 people died, the crash of two trains in the province of Buenos Aires that left 218 dead or the fall of an Aerolí planeArgentina in 1961, which had 67  fatal victims.

Some of the legends we share have comic or friendly nuances. Others, although chilling, have a rather improbable level of likelihood, which takes away some dramatism from them. In this case, because of its true and close origin in time, I think we are facing one of the saddest legends that Santa Fe generated.