In case it wasn't enough with the lapel, the weeping or the lobizón, in Santa Fe we also have a la Umita. 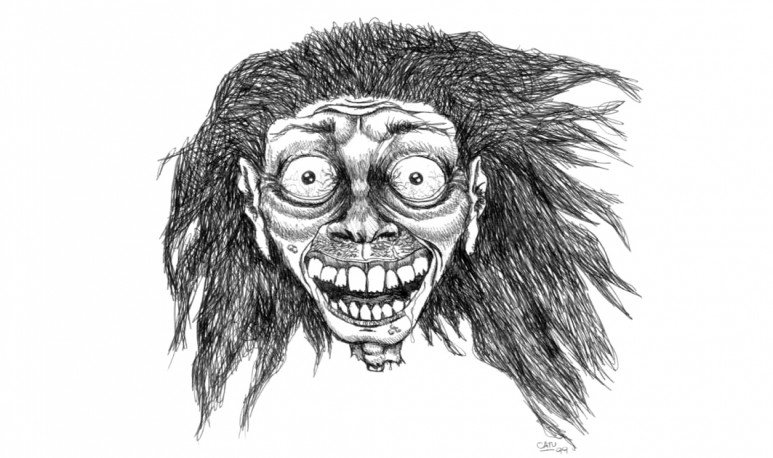 There's the delicious  humita . But there's also the dark Umita. He would be a frighter, deeply rooted inside. In the villages of Santa Fe, where the nap is still sacred, this character is still “used” for the same purpose as La llorona or La  Lapel : let the boys not screw on the street when it comes to rest. Although, this is rather nocturnal, like lobizón .

They say that the Umita is a human head without a body that floats at the floor on lonely roads, or appears in abandoned ranches. It has a long and untidy hair, exorbitant eyes, uneven and protruding teeth.  When you move it emits a pitiful cry. It is believed that he approaches walkers, not to attack them, but to ask for help , which consists in raising prayers in order to achieve redemption, and rest in peace. No one has told the reason for the horrendous suffering, although it is accepted that penalty for punishment. He does not achieve his goal, because the terror that awakens the unraveled face and the horrendous screams he emits, scares away the walkers.

If any man overcomes fear and faces it, he must do it all night. No one has ever managed to howl her. The countrymen claim that, in all cases, at dawn he becomes a bull or calf, and there he tells you the reason for his suffering. The mortal who hears the confession becomes mute, and that way the secret is kept forever.

Santafesinos also believe that, if someone dares to endure the disgust and fear that produces a disgusted face, he will be friends with the Umita . In that trance, she will accompany him on his way as a guide, protecting him from evil spirits and the dangers that lurk the walker.

According to some tradition, Umita was a young woman. In his phantasmagoric version, he goes for a walk with his head separated from his body. The witch is divided into two: the flying head, where it is concentrated all her life, and the body, which remains inert while the spell lasts, but maintains a latent life that manifests itself in the bubbling that blood makes in the neck.   Its departures are always at night, for some full moon nights, for others some special days (Friday, Tuesday, Thursday).

His most frequent cry is waq... Waq..., like duck . Eat human excrement that confuses with apples. It has long and tangled hair.

It is said that he approaches walkers, not to attack them, but to ask them for help, which consists in raising prayers in order to achieve forgiveness and their long-awaited rest. For the reasons explained, no one has been able to tell the reason for the horrendous suffering, although it is accepted that penalty for punishment. But so far he has not achieved his goal, because  when he approaches his victims for help, they are quickly frightened by the horrible squeaks he emits.

If any man overcomes fear and manages to hear what Umita speaks, he will not understand it because his squeaks are incomprehensible. No one has managed to understand what she's saying. The villagers claim that in all cases, at dawn, he becomes a bull or calf, and there she tells the reason for his suffering and the cause of his eternal punishment. The problem is what we already explained.   Anyone who can hear the confession of this being becomes mute and, in that way, the secret is preserved forever.