Inside the province of Santa Fe, well to the south, there would be a door to hell that was carefully closed. I know where he is. 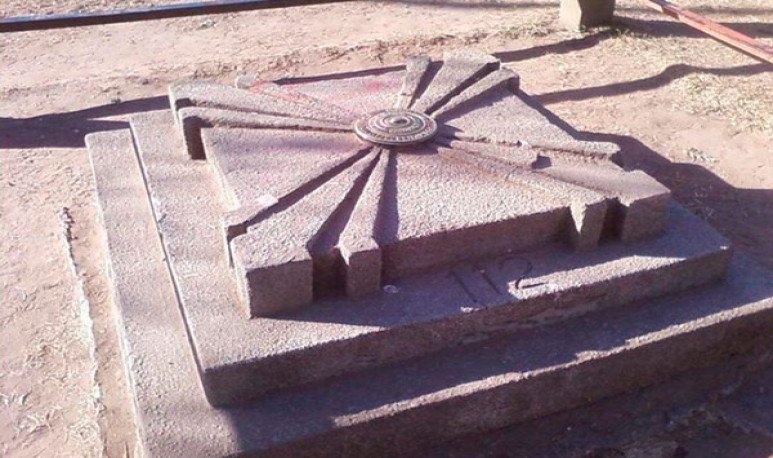 Rufino is a town in the southwestern part of the province. It has the particularity of integrating  a bordering knot next to Cordoba and Buenos Aires.  La Sarmiento is its central square. The meeting point for many rufinenses. More precisely, there is an exact point of the Plaza, which is used for official acts and many other functions: its monolith

The “official version” says  that this place was chosen to indicate the altitude of the city above sea level.  But, according to an ancient legend, that ring shaped quadrilateral boxing ring nestled in the area of children's playgrounds in the square has other origins. Much harder origins, by the way. Those who knew this area before the founding of the village left for posterity stories that show  that there was one of the few entrances that the world had to reach hell.  Therefore, it was also a way out from the evil depths to the surface. And when this region was not yet very populated, that opening was one of the most chosen by the demons to appersonate themselves on earth.

It has been recorded in the popular memory, through stories of the elders, the famous confrontation that starred the cacique pampa Tuguacane with Lucifer. This chieftain  knew that the damage that was being done in his canopy was solely responsible for Satan's envoy,  and one night he decided to go in his quest to end the curse. The bloody struggle spread for about three days, as none of the contenders gave up and continued the fight viciously. Until Lucifer received the help of Beelzebub who, attacking the Pampa leader for treason, stab him in the back.

The village disintegrated. And legend says that the few who managed to flee came out in search of more peaceful places, while many others (the vast majority)  could not escape from the devil's claws and perished in the place.

It is said that, decades later, with the city already founded and being under construction the bridge passing on railway tracks, workers  found in one of excavations a large number of bones . This meant that it was the cemetery of the Toldería or the remains left by the massacre done by Lucifer.

A few years after that fight, a line of cavalry from the Urquiza army that was going to face Rosas departed too far from the original route and, lost as they were in the pampa, they did night camping in this place. And it coincided with another of Lucifer's many exits to the surface. When the devil's representative spotted the carp he took a human form that allowed him to mimic among the troop. Taking advantage of the circumstance, Lucifer was exterminating the soldiers one by one. Two of them, discovering that the murderer was not one of his own, mostly impressed by the strange shine that came out of his eyes, and knowing the legends that narrated about the devil's apparitions, came to realize that it was one of his cruel visits and ran away. Thanks to the testimonies they transmitted to their superiors, when they managed to locate them, this story is preserved until today. S e says that the corpses of the around three hundred militiamen remain under the trees  on the other side of the main square of the city of Santafesina.

The years passed. Rufino was formed as a “modern” locality. Today it is one of the main ones in the south of Santa Fe.

This was how, in early 1900, the elder  healer Asdrubal Capaquen, one of the last descendants of the Querandi Indians, made a decision that was considered by his acquaintances to be crazy . One night of a full moon, and intuiting that one could effectively deal with a route of communication with hell, he  was introduced down that corridor that supposedly carried it to the most remote depths . After a few hours he returned to the surface and thereafter, he did not speak any word again until the day of his death, which occurred a couple of months later. His friends always tried to try to get some testimony, but his lost gaze and his mutism made him impossible. He also lost the powers he had to heal, which everyone interpreted as  a punishment applied to him in hell for the daring of having descended to his domains.

The matter was spreading word of mouth throughout the town. The inhabitants of Rufino were very afraid. The ancient legend could be repeated on the streets of the village. The situation was beginning to become complicated and became public.

Municipal authorities turned to their provincial and national peers for help or advice , resulting in an alternative that was carried out and possibly meant the disappearance of the problem.

The present monolith was built surrounded by a metal square. On its surface, a platelet was placed that reads:  “Instituto Geographic Military Argentino. 112. Altimetric Point. Up to four years in prison whoever destroys this signal.”   What is still true, but was actually an excuse to conceal a reality whose consequences could have been more serious if the situation did not stop.

The last phrase on the plaque is otherwise intimidating. In addition , it gives glimpse of the fear in those who installed it, who in this way tried that access will never be discovered again.

Since then, no new appearances have occurred and it is believed that the subject is under control. But, nevertheless, flashy things continue to happen. Different people have repeatedly counted having heard strange noises coming from below the construction, when they occasionally passed through that place in the square. Consulted old inhabitants of the city, those who witnessed or with a greater knowledge of the stories that occurred, calculate that it could be attempts by Satan or his envoys to pretend to return to earth.   The demons would be destroying from below the cover that was put on the exit, so they could again ravage the area.

Today, rumors speak of the existence, in Rufino, of two gates leading to hell. One in the supposed milestone of the Geographic Institute located in the square. And the second one in the church itself, a few meters from there. But that will be the task of another chronicle that narrates the urban legends of our peoples.