After surviving on the top of Chaltén, Elal began modeling clay statuettes, creating men and women. 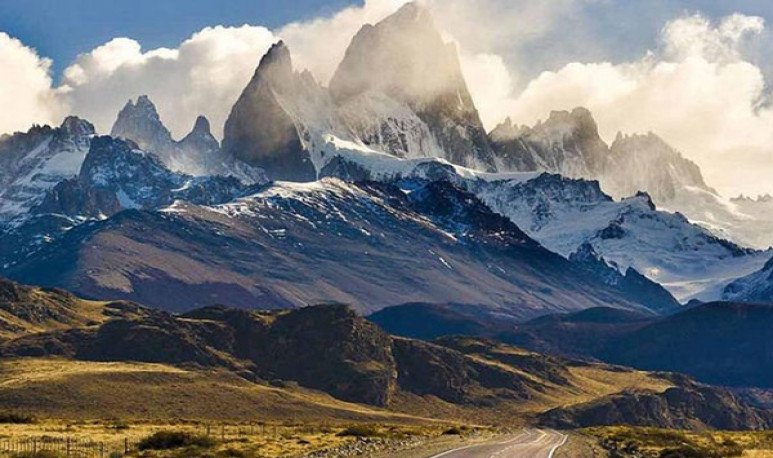 When everything was dark, according to the  Tehuelches , and only  Kooch existed, he created the animals, the sea, the wind, the clouds and the land we know today as  Patagonia  . To that land flew a swan, which was followed by the rest of the species, taking with him  Elal , son of a giant and the cloud Teo.

The giant, son of Darkness, had kidnapped Teo and begot a son. The rest of the clouds swept away all because of the fury caused by the kidnapping of his sister, and the news came to Kooch, who warned that Elal would be twice as powerful as his father, so the giant tried to kill him.

The first victim was Teo, but Elal was saved by the animals and taken to the other side of the sea on the back of the swan, which  deposited it on the top of the hill  Chalten  . It was thus that Patagonia was populated with the different species.

The son of the giant and the cloud did not remain alone on the top of the hill , as the birds took food and shelved it among their feathers. For three days and three nights he stayed there contemplating the vastness of the new earth, which he himself would be responsible for transforming.

Elal began to descend from  Chaltén  and to meet him came those who dominated that territory until then:  Kokeske (cold) and Shie (snow)  . Both, accompanied by the murderous wind, tried to attack him, but he drove them away by hitting two stones together, thus creating the fire.

Tehuelches say that Teo's son was always wise, since he learned to hunt animals with two inventions he created:  the bow and the arrow.  And with them he enlarged the land, chasing away the sea with arrowings.

Then he created the seasons, tamed the beasts and ordered life. With the water retreating, c omenated one day modeling clay statuettes, thus creating the men and women: the Tehuelches . They were to whom Elal entrusted the secrets of hunting: he taught them to differentiate the footprints of animals, to follow them and to lay decoys, to manufacture weapons and to light fire.

They also learned to face the raw and terrible cold of Patagonia, sewing warm ponchos, called quillangos, to prepare the leather for the awnings until it is smooth and waterproof.

The story also tells that the sun and the moon are in their places by Elal's work: he kicked them off the Earth because they didn't want to give his daughter as a wife. That is why the sea grows with the new moon because the girl, abandoned by the hero in the ocean, wants to approach the sky, from where her mother calls her.

Moreover, if it were not for once, who knows how long, when even men and animals were the same thing, Elal punished a couple of sea lions, there would be no desire or death.

Finally Elal, the wise man, the protector of the Tehuelches, finished his work and, after that, one day decided to gather the choneks to say goodbye to them and give them the last instructions.

That day he told them that he was leaving and asked not to honor him, but to pass on his teachings to his children, and these to his own, and those to his own, so that the secrets of Tehuelches would never die.

When he was looking out over the horizon,  Elal called his old friend, the swan who left him on the summit of Chaltén, climbed on his back and indicated with a gesture the burning east.  Then the swan moved away from the cliff, ran a stretch and took flight over the sea.

Leaning over the bird carrying it and stroking his long neck, Teo's son and the giant asked him to warn him when he was tired, to shoot an arrow towards the sea that would create an island on which he could rest and then continue his journey.

They say that several of these islands are still distinguished from the Patagonian coast and that, in some of them, far away, where no man can reach, lives Elal, who sits in front of bonfires that never die, listens to the stories told by the tehuelches who, resurrected, come every time to stay with him.