This is one of the key events in Argentine history. One of the betrayals that were marked forever and today has its paranormal dye. 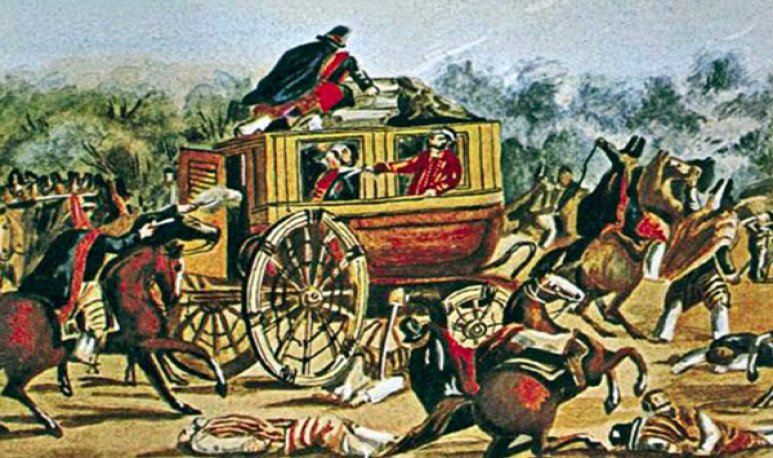 Barranca Yaco is a unique place on the Camino Real, which crosses all of Cordoba and leading to the Viceroyalty of Alto Peru in times of colony . In this post,  one of the most tragic episodes in history happened: the murder of Tigre de los Llanos . To this day, the museum that stands in commemoration of this fact  is stained with the colors of death and betrayal.   The episode  happened 185 years ago, but its commemoration hits more and more strongly.

Death and treason in Barranca Yaco

This post became the seat of  one of the most terrible deaths in our history.   They tell the bad languages  that, in 1834, Facundo Quiroga was sent by the central government to mediate the fighting in the North. A year later he was returning to this post, and he was ambushed and killed by a militia under Captain Santo Perez. That they had been sent by the Reynafé brothers . The murder of the “Tigre de los Llanos” and his entourage took place at this point,  which makes it an  iconic place.  Today  a monument is erected in memory of this Rioja warlord.  And around this place  thousands of mysterious legends expand.

Mystique of a goodbye

Almost two centuries after the assassination of the warlord Juan Facundo Quiroga,  this event is remembered with the force of an urban legend.  However, only 80 years ago, the posta de Sinsacate, where the wake of imminence took place, is a museum. It is known as the  Posta de Sinsacate Rural Museum.  There were emblematic characters , heroes of our history and protagonists of our freedom.  From colonial times to our independence, this section was traveled by several personalities. This Posta began to operate in 1762  and witnessed the passage  of  patriotic armies marching to Upper Peru.  As was also ground stepped by General  José de San Martín  at the time of directing the Army of the North.  A particular fact related to the great liberator is that, in this post, he received the help of cavalada from  José Javier Díaz,  owner of the nearby Santa Catalina estancia.   General Manuel Belgrano and Juan Lavalle also rested in his bosom.  Therefore, and much more, it was declared a National Historical Monument in 1941 and restored in 1946. It was the venue of the  last farewell to Tigre de los Llanos   by his companions . And, therefore,  the place acquired a sacredness that remains intact.

The narrative of the facts

The events took place in Barranca Yaco, where  even today strange episodes occur. Signs of the beyond of a man who died making history.  By way of a novelesque story, the media tell about the episode:

The sky announced that the rains were coming on Monday, February 16, 1835. About 11 in the morning, 9 km before reaching Sinsacate, where the road turned into the thick mountain of shins and talas, a game of 32 men under Santos Pérez's command cut the way to the quiroga galley.

What is it? Who's sending this game?  “ asked loudly, pulling his head out the window.   That would be his last words.   A certain shot hit his left eye. Another one would give him in the neck.

Santos Perez climbed the galley and pierced Ortiz with his sword. The rest of the men were dedicated to killing the rest of the riojano's companions.   No one should be left alive. All the bodies were killed, even Facundo's.

Santos Perez  must have killed one of his own,  when he refused to kill the boy Basualdo. One Marquez was the one who would kill the unfortunate postillion, who cried out for his mother. Then, the contents of the baggage were distributed, taking to the clothes that were worn by the dead. The horses were released and the carriage, with bullet hits, hid it in the mountain.

What Santos Perez did not perceive  from the mountain they were watching them  . Two post offices, José Santos Funes and Agustín Marín, accompanying Quiroga, were riding somewhat delayed. Hearing the shots  , they hid and saw everything.   They were the ones who  warned Sinsacate's posta.

The local justice of the peace, on that rainy afternoon, ordered the search for the bodies of Quiroga and Santos Ortiz, and deposited them in the church. The next day, Quiroga's body was taken to Cordoba, where he was buried in the Cathedral and his secretary's body to Mendoza, at the request of his wife.   What happened to the rest of the bodies is ignored.

That is why, to this day, in commemoration of this hinged episode of history,  celebrations are held to remember Tigre de los Llanos.  Barranca Yaco's anniversaries are accompanied by the  “facundine week” based on recordings, tributes and cultural manifestations , where  the central figure is the Rioja warlord.  It is that this event  was not only the  inspiration of great literates or the passion of outstanding historians, it also became  the tradition of a whole town.

For some , this tragic story is still alive and is presented with paranormal messages . The locals  say that, on some anniversary, years ago, they saw the empty Quiroga galley, pulled by six horses, crossing the road and getting lost in the mountain.  Others mention equally strange and paranormal facts. They say that  every week the wind has messages from beyond, between the shins are heard the heartbreaking laments of the  12-year-old sock,  which he still asks for his mother.