In the 1920s, an American sheriff claimed to have seen a plesiosaur in a lagoon near El Hoyo. 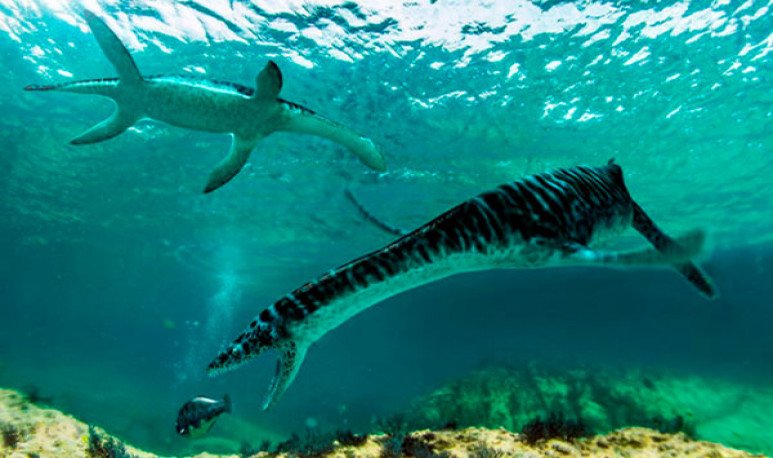 The history of the  Nahuelito  in  Bariloche    is one of the great popular legends of  Patagonia . However, a few kilometers further south, in   El Hoyo , Chubut province, an American claims to have seen a plesiosauri or a lagoon that today bears that name.

The plot dates back to the 1920s  and the protagonist is the American, Texas native, Martin Sheffield  . Here already begin some crosses of versions about who this character was who had settled in the Patagonian West in the last year of the 19th century.

While some claim that he is a former sheriff who came to the  Andean Region of Parallel 42  in search of gold, others claim that he is an aviator who, following in the footsteps of Antoine de Saint-Exupéry  —the creator of El Principito—, after landing in  El Bolsón  , would have abandoned his journey through the Patagonian skies to join the “gold rush” that had occurred.in the area at that time.

The Texan did well by extracting that metal into the waters of the tributaries of the Chubut River and quickly became a kind of picturesque night character in the bars of El Bolson and  Esquel .  Some say that, expert in gunman art, from the bowls some glass or lamp were victims of his infallible aim.

Legend has it that one afternoon in 1921, when Sheffield walked in the lagoon located about ten kilometers from El Hoyo, a strong snap in the water broke the peace of the place and immediately appeared an animal with a large loin with a small head similar to that of a swan. His first impression, from the wake he left in the water, was that it was a crocodile.

Curiosity and intrigue invaded the Texan, who decided to investigate the facts more thoroughly and try to establish what it was about. One night, he managed to search a trail on the grass near the lagoon where he had his hunter post.

His new discovery led him to write a letter to the director of the  Buenos Aires Zoo , Clemente Onelli, connoisseur of the Patagonian lands. “The trail is similar to the footprint of a very heavy flat, the grass was crushed and does not rise anymore, which suggests that the animal that creeps there must be a huge weight,” said the epistle he sent to the naturalist.

Onelli spread the letter in the capital's major newspapers and claimed that what the sheriff saw was a plesiosaur. History, in terms of our days, became viralized and caught the attention of international scientific media.

In the United States, President Franklin Roosevelt himself — who said he wanted at least “a piece” of the plesiosaur — announced that his hunting companion, Edmund Heller, would leave for Patagonia and the New York Museum of Natural History announced that he would send five commissions to South America to devote “to the search and capture of animals of extinct species”.

From Buenos Aires began a collection to finance the search for the animal allegedly seen by the Texan sheriff and the existence of the plesiosaur became a matter of state.

The explorers came to Chubuten lands and for a while raked the area. They used explosives in search of the animal without success, so, over the course of the months, the illusion and interest in continuing to travel the waters of the lagoon and nearby lakes was diluted.

Almost a century later, the legend of plesiosaur continues to spread and the lagoon is one of the places to visit by any tourist who reaches the Chubuten mountain range.

Martin Sheffield's story has some edges that don't leave the sheriff well. His passion for bar nights and drinks led some media to claim that, in the meantime,   whiskey   or    gin , it was “normal” for farmers in Patagonia to “see anything”.

Others say that the Texan was preparing to enrich himself as the guide of the expedition that embarked on the search for the plesiosaur. However, the presence (or not) of the animal in the Patagonian waters remains in the collective imagination.