In Jujeñas lands there is a dark story about the deadly gaze of a mysterious animal known as Basilisk. 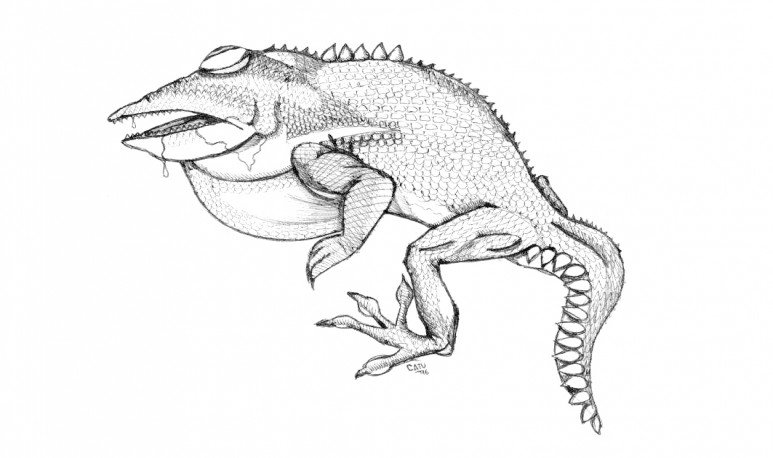 An Argentine legend troubles the beautiful jujujuños  landscapes  with a cruel creature of dubious origin. The basilisk has a deadly look capable of leaving blind and even killing whoever looks in his eyes directly.

This little being is born from an egg without yolk, sterile, laid by an old  hen  or a rooster who has turned seven years old. When an egg has been opened with nothing but its shell in a nest, a Basilisk was born according to the story. The animal hides in recesses of houses or on their roofs, or hidden places where sunlight does not reach. That way, he can wait patiently for his victims. Whoever looks at it loses his sight and, in some cases, lose his life in the encounter.

One of the ways to deal with it is to wear a mirror as a weapon and get the beast to look into it and perish instantly. This sudden death of the monster is due to the fact that even he himself can withstand his own reflected image. Also, if a man or woman looks at him first, he dies instantly.

The form described in the stories about the Basilisk are two well known. In a first way it is seen as a black reptile resembling a lizard with only one eye on its forehead and without eyelids. Other times it is depicted as an animal with a rooster body and snake body of a brown color, also with a single eye.

A legend of Spanish origin?

In  Spain  there is the story of the Basilisk but, instead of killing with his gaze, he struck men with deadly breath. He usually attacked the miners, as they went in search of precious minerals found in the habitat of the beast: caves and mines. This fable ensured that the inhabitants of Cantabria, testify to the existence of the animal. To face him they wore a rooster, which when he felt the presence of the creature, sang and thus counteracted the power of the Basilisk.

According to Chaco writer José Ramón Farias, this syncretism of cultures occurred as a result of the imposition of religious beliefs on the part of the Spaniards when they arrived in America and the silent resistance of the natives to abandon their myths. From there emerge legends such as the curious Salamanca and the Basilisk. The latter has its connection in that both stories (Spanish and Jujeño) coincide in their forms and that, in general, the animal protects a valuable treasure.

In  Europe , the 16th century, there was a large-caliber cannon that, due to its destructive power they called Basilisk, weighed about one thousand eight hundred kilograms. He engulled everything his shot managed to impact in a range of large-scale destruction. The weapon fell into disuse at the end of the 16th century because European troops preferred light and more precise artillery in their targets.

On the other hand, we have a small reptile known as basilisk. It is a lizard of fingers and long tail with a thin structure. It has as habitat small streams and rivers during the day. In the evenings he hides in bushes. Males differ from females by their elongated ridges. It has an atrocious speed with which you can catch your prey such as rodents, birds and small insects. With its unique speed he escapes easily before the attack of a larger predator. You can even run over the water if necessary for your flight, thanks to the dermal lobes on its posterior  legs  .

The Basilisk is one of the legends that travel through Jujujuño terrain. The story is told from generation to generation and the fear of meeting one still persists after finding empty shells of an egg in some chicken nest.