Home People The worst thing about us The tornado that wasn't

It is famous in Santa Fe a story of lack of responsibility when it comes to communicating. 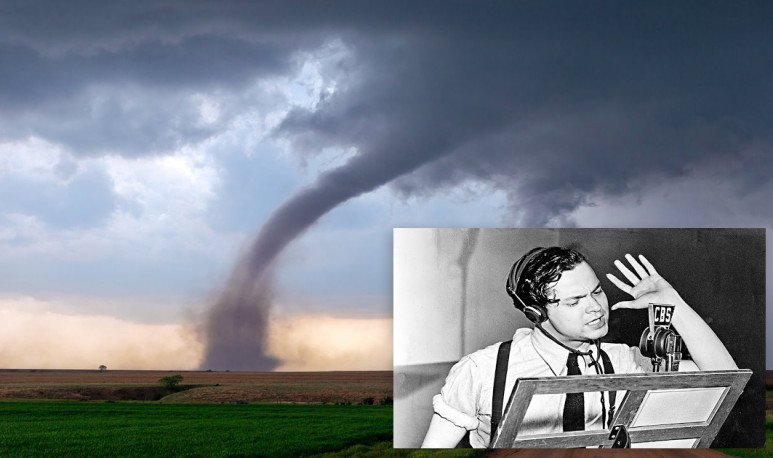 Those of us who study Social Communication or Journalism know  the story of Orson Welles very well and an alien invasion that wasn't.   Actually, it is not necessary to be “this area” to get to know it: it was an important episode in the  history of the media  and, at the time, convulsed the United States. It was a paradigmatic case in which a media outlet did not know how to measure the responsibility it has.

Far from New York and about 74 years later,  something similar happened in my native Santa Fe.   It was the end of 2012. I was already a graduate of social communication, but I had to complement my vocation with other jobs, because my “communicational” income did not reach me to survive. So he was doing administrative work in an elementary school. There were all the teachers, the teachers, the managers and I were in a plenary meeting. Shortly before noon, one of the goalkeeper violently opens the door to the cry of  “They said on the radio that a tornado is coming! ”.

The screaming was widespread. The teachers took their briefcases and ran to their cars before the astonished gaze of the executives who failed to say any word. Then they corroborated that the news was true, and we also left the ones left. Afterwards, I learned that almost every public building in the city had been evicted.  People ran through the streets  trying to reach means of transportation to protect themselves in their homes.

Turns out the tornado wasn't such. The driver of the most listened radio program in the city had  exaggerated . He said that a tornado was coming, although the Centre for Meteorological Research did not detect conditions for this phenomenon. When he corrected the information to the air, the damage was already done. A zero in communication responsibility.

The most listened radio

In Santa Fe, historically, this classic dichotomy was given in the radio world: FM is for listening to music. The AMs, which are only two, have much more informative content. But, just a few years before the tornado episode,  this new FM radio appeared that really marked a milestone in the city.   For the first time, an FM became the most popular radio station in Santa Fe. Since its appearance, it is by far the most heard in taxis and  remises . It is characterized by almost always having the first fruits and by a certain yellowish tint.

What can not be denied is that its creator revolutionized the Santafesina radio tradition. After that unforgettable moment of zozobra, the radio replenished and continued to grow a lot. Two factors stand out on the road to what is today the most listened radio in the city of Santa Fe. First,  he understood that there was no point in doing low-budget journalism and it should add quality  and responsibility. The radio set up a writing with journalists who do not make air, but are only dedicated to producing and writing news, unlike the general model followed by the media, of having multifunctional journalists. He also joined specialists in transcendent issues, correspondents in Rosario, Buenos Aires and Europe.

The second feature was the good integration of the  phenomenon of social networks, surpassing on Instagram, Facebook and Twitter any other media  in his city. Their news portal, they say, is the most visited in the province. Yes: it surpasses the media of the great Rosary.

However, it is clear that that nefarious morning, the famous driver  escaped the turtle  with a key element: responsibility when it comes to communicating. Especially if you have an arrival to such a large audience.