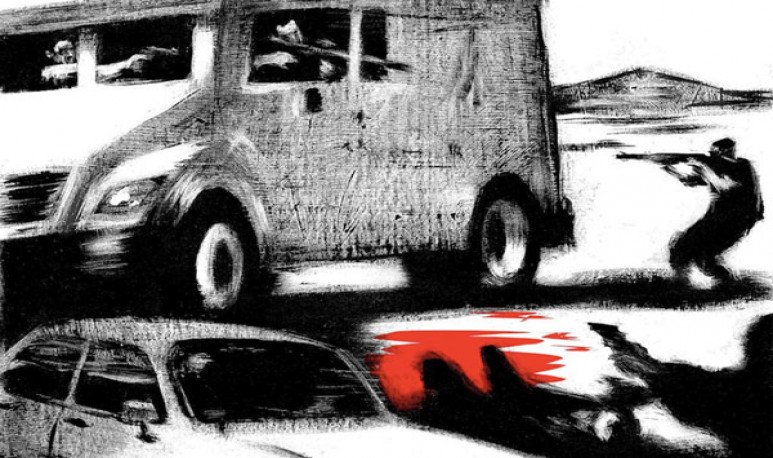 It was in June 2007.It was the harsh winter chubutense in the quiet  Rawson  , which has a frenetic pace during administrative hours, but then calms down. No one imagined that one of the bloodiest crimes remembered in the capital of that Patagonian province could be executed.

That  June 15  was another day in Rawson's life, but after noon the nightmare began in the building of the Ministry of Economy of the  Government of the Chubut .

Martín Espiasse, Jorge González, Rodolfo Bilbao Vaca, Evaristo Miranda Regules, Walter Dimuto and Gastón Barrientos  arrived in Rawson with a plan to keep a juicy loot that would be in that government office for the exchange of money from an ATM installed there.

González and Miranda Regules entered the building armed to their teeth, at the same moment Mauricio Paverini, who was carrying a briefcase with him 283 thousand pesos, and the cash that guarded him, Emiliano Royón.

Meanwhile, Barrientos went to the flow truck that was parked in the vicinity of the building and hit the bank mobile driver in the head in search of an alleged second briefcase.  But something came out ma l.

Troops Pablo Rearte and Oscar Cruzado saw what was happening and began to shoot the bandit , but the criminals who had entered the building and the rest of the maleants in the vicinity of the Ministry as support began shooting as well.

Espiasse tried to reduce Rarte and Cruzado; the uniformed men managed to break him, but the situation was warned by Dimuro and he joined Barrientos and Bilbao Vaca, who managed to hurt both policemen.

Espiasse, taking advantage of the situation, took the gun from Oscar Cruzado and shot him at a close range after running his bulletproof vest . He and his partner both lost their lives after the shooting. Royon, who was the custody officer, got a bullet hit in one leg.

The band started the leak in cars they had left ready for the exhaust. Walter Dimuro fell right away. Some say that, maybe shocked because I didn't expect that outcome, he was walking armed and bloody through the streets of Rawson. The next day there fell a young woman identified as Jéssica Fernández who, accompanied by Evaristo Miranda Regules, carried all the spoils with him.

Sooner or later the others were arrested and, by the end of 2008, received their convictions.  Gastón Barrientos and Walter Sebastián Di Muro were convicted as co-perpetrators of murder qualified to achieve impunity for life imprisonment; Jorge Hugo González, primary accomplice, and Evaristo Miranda Regules, with the same sentence as the previous ones. Jéssica Fernández and Carlos Ortíz, for their part, were sentenced to 12 and 14 years' imprisonment respectively for being considered secondary participants. Vaca Bilbao committed suicide in   Mar del Plata   when he was cornered and kept in mind that his arrest was imminent.

Martín Espiasse was sentenced to life in 2010 and transferred to Ezeiza. He managed to escape and for five years he was the most wanted fugitive in the country until, in December 2017, he was arrested in  Mendoza .

Pablo Andrés Rarte and Oscar Ibérico Cruzado are considered heroes who died in the performance of their duties and the memory of both members is always present in the memory of Rawson's citizens.

A three-day duel was decreed before the terrible events and society was very shocked not only in the capital  Chubutense , but throughout the province.

Rawson's tranquility was interrupted and since that day nothing was the same again.