Home People The worst thing about us Easy trigger: national and Cordovan practice

Institutional violence is an established reality, almost an Argentine tradition. We tell you several Cordoba episodes that prove it. 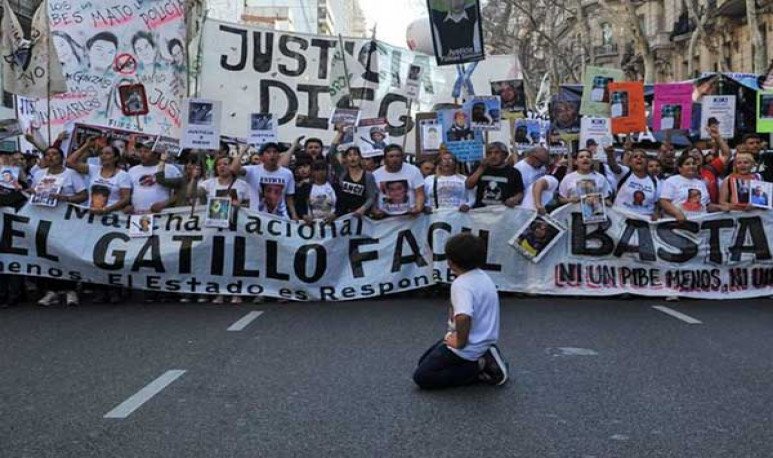 Every year, in every administration, in democracy or in dictatorship, the streets are filled with people claiming for their loved ones . “Disappeared”, the target of a “lost bullet”, victims of institutional violence,  faces that reflect injustice and police abuse. The last life claimed by the Cordovan provincial police force was that  of a 17-year-old boy  named Valentino Blas Correa. Today the whole country is shouting his name as a request for justice.

In Argentina, institutional violence is a reality, almost a tradition.  Military and police forces, ramming from a supreme power, trigger without reflection. Without repairing the consequences.  In the end , the only consequences are suffered by relatives, friends and acquaintances of the victims. Broken dishes are hidden under the carpet by justice, the evidence is manipulated by the authorities and the media, they take care of the rest.

Meanwhile, our history continues to bleed old wounds that dye our democracy with the colors of torture.  More than 40 years after the longest and most tortuous coup d'état in Latin American history, we shout every March 24 a “Never Again” heard around the world. However,  these screams do not interpel everyone equally.  This is how  dreams continue to take away from us,  stealing our youth, taking lives and  filing causes under the label “disappeared.”

The numbers of terror

While globally the slogan #BlackLivesMatter travels and floods networks  of demands for justice,  in Argentina  people continue to kill and disappear because of their social conditions.  In Cordoba, in particular, Correpi provides chilling data.From 1983 to 2018,  435 people were killed by the state.  This results in a number of  340 persons who have been victims of institutional violence in the last 20 years.  Of which,  42% were cases of easy trigger.  On the other hand,  deaths in Cordoba prisons and police stations  account for  35 per cent of cases: the deaths that no one counts.

These percentages, numbers and statistics  have a face, have names and have strokes.  The entire Cordovan community goes out every year to ask for justice in the different editions of the  March against the Easy Trigger and the March of the Cap.  These demonstrations, which are organized annually, have originated  more than 10 years ago.  And every year, a new flag is added to it,  a new story ,  a new face to fight for.

Nationally, Facundo Castro, Santiago Maldonado, Luciano Arruga, Julio López, Mariano Ferreyra, Walter Bulacio, are just some of the names. At the provincial level, Blas Correa, Facundo Rivera Alegre, Rodrigo Sanchez, Guere Pellico, Andres Carreras and Raul Ledesma. Unfortunately, we're still adding up. Maria Cash, Yamila Cuello and Marita Verón, because there are also  women's names on the list.  Trafficking networks covert by state institutions.  Covenants of silence, interventions in crime scenes, arrangements with justice. All these factors are what take from us one by one the lives of these people.

If we organize, we all fight

It is not innocent that there are  entire armed organizations specifically to fight against these state policies,  against these omnipotent institutions that  take away  the lives of our young people. There is, in Córdoba, a  team to support relatives of young people killed by the police. There is also a  Coordinator of Relatives of Victims of Easy Trigger, there is CORREPI (  Coordinator against Police and Institutional Repression ). Because  whenever there was injustice, there was resistance.  But there is something that does not yet exist: an answer to so much violence. The families, companions and friends of these easy trigger victims nobody answers. The only approach to justice is the  collective embrace.  Go out to the streets, embrace and  make these cases visible so that they do not happen again. Shout, together, as many times as necessary:  Never again.