More than 50 years after arriving in Argentina, Minoru Tajima confesses that it is still difficult for him to speak Spanish, and also that he is forgetting some Japanese terms. 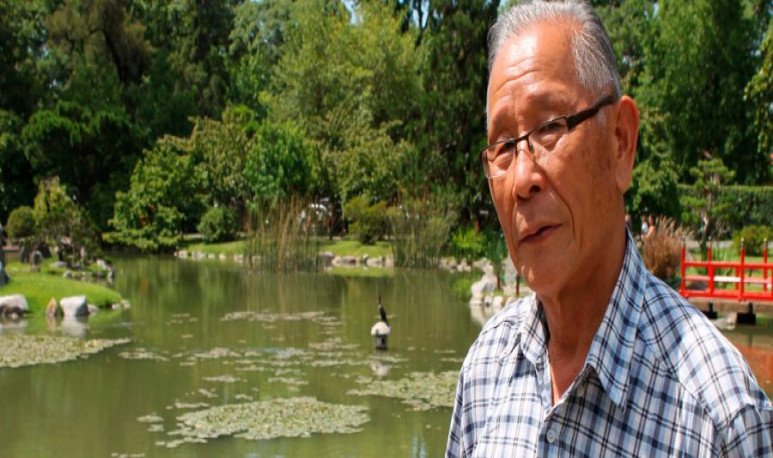 More than 50 years after arriving in Argentina, Minoru Tajima confesses that it is still difficult for him to speak Spanish, and also that he is forgetting some Japanese terms. But nothing stops his enthusiasm for the maintenance of the Japanese Garden of the city . Minoru left embarked to Buenos Aires from his native Japan at the age of 20, with the idea of making a journey of 45 days and seeking fortune as a cattle breeder. Upon arrival, the livestock business did not turn out as expected, but he ran into a curious range of unexpected occupations, including a period of fame as an actor, especially in comedy shows, and another as a masseur of the famous jet set.

Now, at 70 years old, he left the show business behind to start at 7 in the morning his work in the much quieter atmosphere of the Japanese Garden in Buenos Aires, surrounded by its red wooden structures and lake full of tent.

“ They had the material brought from Japan to build the tea house, but they needed someone who knew how to build it,” he explains. “In Japan we don't use nails or screws; we fit the wood with different joints, which makes the construction more flexible to withstand earthquakes.”

Having helped build several structures in the park, today his job is to help maintain the buildings and the garden in general. He also teaches staff about Japanese customs and culture. “I teach Argentines to be Japanese,” she laughs. “I explain how we act and behave, as well as the proper way to care for different plants.

It's a meditative and relaxing work. I like the connection with my country I found here. “ Having found this connection, despite the fact that his three children now live abroad, Minoru decided to stay in Buenos Aires. “I'm not Porteño, but now this is my home. I like red wine, pizza, meat and pies, and people are warm and friendly. I always put a lot of passion in everything I do and Buenos Aires is a passionate city. “

The young Frenchman who lights the oldest oven in the city

I met the manager of the centenary building where Pope Francis cut his hair.

Meet the coach who keeps his club fight alive.

The Santafecina siesta: a current tradition