A group of women went from rummaging in the trash to making brooms. Obviously, nothing was for pleasure. Border witches do it for a living. 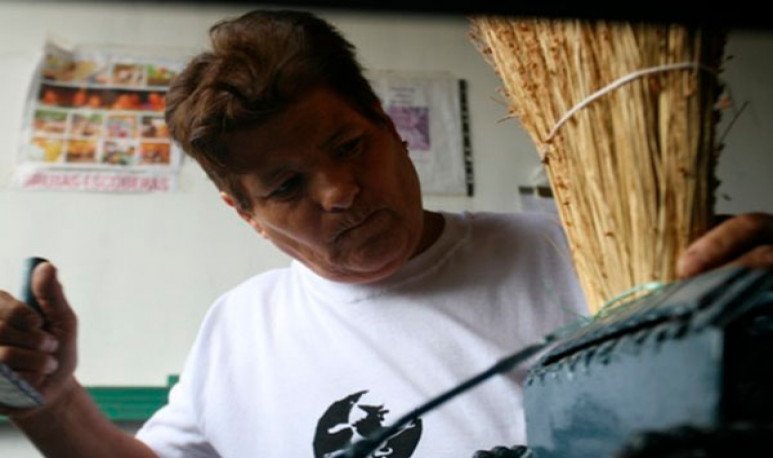 Search for recyclable material among the garbage of a huge property located in Puente de Hierro,  Guaymallén , Mendoza. With very high temperatures in summer, refracting the sun's rays in the glass and the dumpster cans. With cold temperatures in winter, when the sensitivity in the fingers disappears. Definitely,  that is not an activity that is chosen, but it comes by discard. That's it, or not to eat, neither you nor your children.  Patricia Villegas and a group of women who had the resilience needed to overcome the situation and go from being the women who searched in the trash, to being the witches blobs.

After 7 years of looking in the trash for some recyclable element for which they later received very little money, Patricia and company got tired of the situation.  Above all, after a heat stroke she suffered and an accident that prevented her from continuing to work on one of her companions.  Faced with this situation, they said “enough” and proposed to change activity.

They went to knock on the doors of the Municipality of Guaymallén. There  they received the expected help. Just a boost, but enough to assemble your own workshop manufacturing cleaning elements such as brooms, lampazos, mops and other items. There were six women who, initially, worked in the “Witches Broombras”.

None of them had the palest idea of how a broom was made. However, they received the relevant training and today  they are all experts in the artisanal assembly of the broom . They started getting together in different houses and then managed to set up their humble  factory.  All handmade, just like they do. In one of the many empty grounds they mounted the space between them all, from the sheet metal construction, to the painting of the facade.

They were also able to buy two machines that  allow them to manufacture between 20 and 25 brooms per day.In order not to neglect their children, they only work in the afternoon when the little ones go to school.  Once ready to start, they named the project and named it “Witches Escoberas” a word game that refers to the strength of these women. Since they are considered powerful and they can get ahead if they propose it. I was officially registered only in 2015.

Today,  only Patricia remains from that society of friends. But, far from leaving the ship, he decided to transfer the idea to his home. The machinery was installed in his house to turn it into a family venture. And he's still training. He joined the team a neighbor and her daughter who is in charge of the deliveries. Remember that they have had times of bonanza and good sales. However, in this time of  pandemic  they have limited themselves to selling around the neighborhood as they do not have mobility.

Today he not only lives from the marketing of brooms, lampazos and mops, but also works, during the week, in a nylon factory. But the weekend is left for the Escoberas Witches.  On Saturday they separate the material, the junquillo and the guinea, and on Sunday they leave it for the armed. It offers a variety of products of different sizes and even colours.

But it's not the only thing he does for his community, besides his two weekly jobs, he goes out twice a week to cook with his daughter, and collaborate with the local  picnic  area, Rincon de amor, which hosts almost 50 boys.