We tell you the story of a man who accepted the challenge of eradicating meat from his diet and then eating a marathon... The results? On this note. 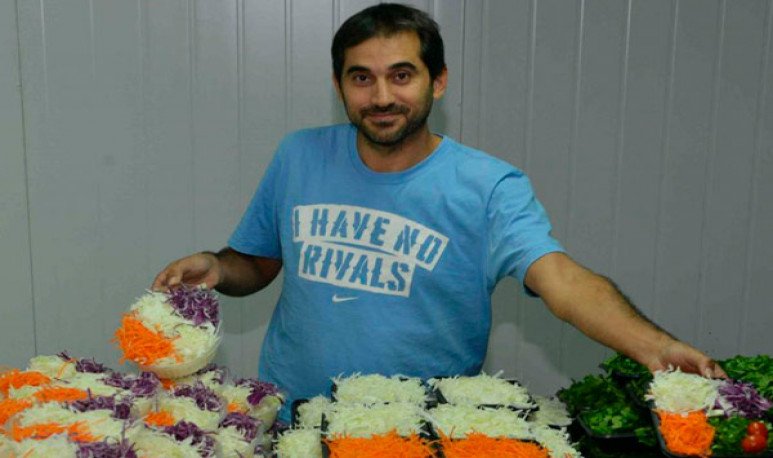 Cordovan Matías Osman, 39 years old, accepted a veggie challenge .  The flag was raised  in  defense of animal rights  and, in the midst of a global pandemic, organized a plan. The idea was  to deal with the myth that eating healthy is expensive.

The origin of the experiment

The origin of the experiment  was inspired by the Czekalinski Project: a proposal by a  group of CONICET researchers who decided to put the body and feed with the  Argentine Basic Food Basket promoted by the State.  The aim of this project was to check whether such foods  could meet the nutritional needs  of  an average household.  The Czekalinski Project had a negative impact on CONICET professionals, so they had to quickly abandon the diet. And, as a consequence, they are  struggling for the implementation of a real and healthy Basic Basket.

Matías Osman gave him a twist and adapted this idea to his goals.  It was fed for  six months on a plant basis and with only 100 pesos per day.  In parallel, I was going to train to run a marathon.  It was quite a challenge , because  he not only had to radically change his habits,  but also take care of networking his results and train hard. “ During the process, the most difficult thing was to work in the discipline.  No alcohol, no tobacco, no desserts, cold, night, rain and tired.  To do this experiment, I had to be very disciplined. And it was also difficult to synthesize in a single sentence what this project was for. I think I did it to show that many problems can be solved together and in a fairly easy way.”

From meat professionals to vegans

Osman acquired new perspectives on food in 2013  with a documentary about what happens inside the slaughterhouses. He owned a supermarket where the butcher's shop was a big income, but he felt that that kind of business  no longer resonated with his new identity . With his wife Mariana, who ran a fridge,  they began to manufacture products free of animal cruelty.  Leaving aside the dynamics that are supported by animal exploitation.

Thus, they began a transition to vegetarianism,  eradicating all kinds of meat : ham, fish, chicken, pork, etc. Then, already more soaked in the subject,  decided to start with a vegan diet.  That is, by  suppressing all consumption with animal derivatives, no more cheese, no milk, no egg, or any processed that has animal fat.  This change revolutionized  the couple's mind and soul,  and they want to share it.

That's why they carried out the Alimentum Project (@proyectoalimentum) with a key slogan: #comédiferente. In this context, Matías shared data  about his diet, clinical and medical studies, and a little his routine as an influencer.  In their networks, he states that this also functions as  “a contribution against hunger.”  Since the challenge is to  break the old social, cultural and economic paradigms around nutrition.   “ We need to be part of the  re-construction of a food system that is more egalitarian, healthier, less unbalanced, less polluting and more sustainable than today.  We can solve the problems we face  if we understand that the key is cooperation,”  says this Cordovan, expert in nutritious alternatives.

“ I think there is a lot of confusion with the issue of food, most think that eating well is expensive and that we also need animal protein so that we do not lack anything. There is no need for more resources to feed, what is needed is more education.  Today there are 840 million people who go hungry every day of their lives, in a world that somehow has food so no one goes hungry.  I think that  if we change the production and consumption matrix a little  , in the short term we will have a lot of novelties.”.  With that line of thought and with the aim of contributing his bit to global change, Matías Osman met  an incomparable challenge.

On Sunday, October 25, the awaited marathon ran . He did it in costume as a cow, inspired by marathoner and vegan activist Fiona Oakes.  Thus, he managed to test himself  and demonstrate the results . The marathon was in Buenos Aires, without sponsors, no brands to accompany him.  Osman ran 42 kilometers for his cause. Because it defends  healthy eating and committed to a world more conscious and respectful of the planet we inhabit. The tests were clear to Matthias:  “A plant-based diet is extremely economical, and it can have optimal health without animal protein (milk, meat, egg). The body is an adaptive machine.”