Stefano Romagnoli and Soledad Patiño study master's degrees in the United States. They run a community project in Atalaya neighborhood. 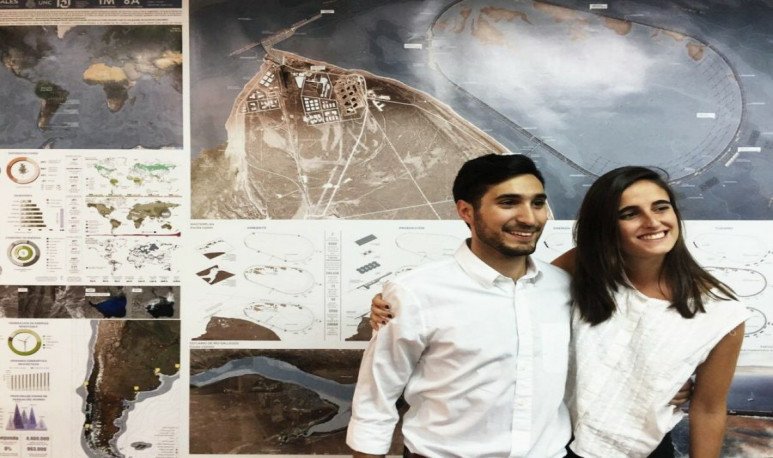 Both are 26 years old and have been boyfriends since the time of students. In addition to love and profession, they share the  solidarity vocation. “The desire to contribute to building a better country and society for all, from the bottom up.”

That is the answer they gave spontaneously, almost in unison, when asked what led them to accept, without hesitation, the technical direction of a project to transform a dusty wasteland from Cooperativa Atalaya neighborhood — in the postponed area of Argüello, in the northwest of the city of  Cordoba — in a square full of life and colors for the boys of the  picnic Los 5 Angelitos .

The original idea is from  I love my square . This is a social entrepreneurship that proposes projects for the revaluation, recovery, activation and sustainability of public spaces in vulnerable sectors, in a collaborative way.

“Our collaboration with this project came from an invitation from Yo amo mi plaza and the Hillel Argentina Foundation,” said Romagnoli.

“As UNC graduates, and with our experience at Harvard, we did not hesitate to join the Plaza 5 Angelitos project. As a way to contribute to the development and construction of a better and fairer country,” Soledad reinforced.

They both put the body and the talent. With the same determination with which they carry out research in Argentinian  Patagonia  on tidal energy (electricity obtained from the use of tides) and the socio-environmental impact of fracking in Argentina  Dead Cow .

Participatory design is the strategy used in this collective venture. In it, both children and adults participate in the creative process and the intervention of public space. This is what Orlando Lenzina, architect graduated at the UNC, explains.

A mural has already been made in the wasteland that will be transformed into a plazoleta. Another is planned inside the picnic area that Isabel Tulián and Mario Bazán put together eight years ago. There, about 150 people (between children and moms) share a cup of milk or matte cooked in the evenings. And a plate of lunch at dinner.

The name of the place reminds the little brothers who died tragically a decade ago in the Argüello area when the precarious wooden square in which they lived with their mother caught fire.

In addition, the urban/landscape intervention of the plaza's common space is planned. And the restoration of the  hammocks , the slide and the climber of the place, which are almost destroyed.

Also, soil movement and afforestation. And the training of  families  in the sector in the treatment of  garbage  . And the care and maintenance of the plot that is being valued.

“We want this project to be realized and that it can continue to grow so that other people get excited. And replicate it elsewhere, for the benefit of everyone,” said Stefano.

The inauguration of the work is scheduled for September.

A marplatense that revolutionized street art in Puerto Rico

Jésica Terry, a versatile artist who shines in New York

Argentine strings to the world