Home People Stories of people The longings of Guadalupe

Guadalupe Sadleir is a 12-year-old Correntina girl who lived a series of unfortunate events and today she dreams of sleeping under her own roof. 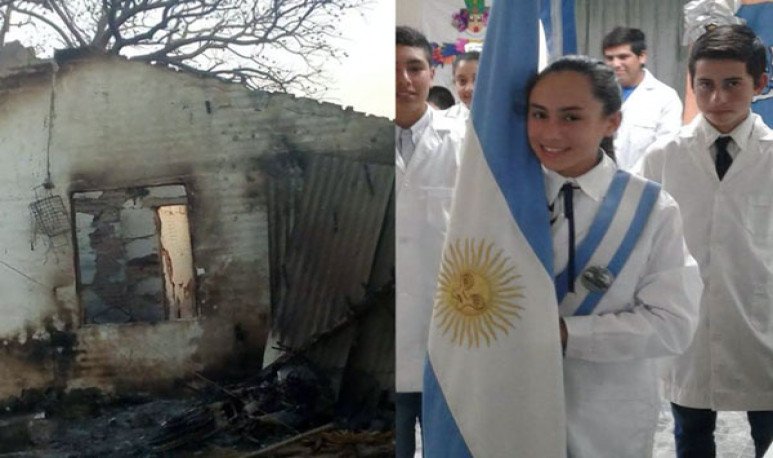 The transition from  childhood  to  adolescence  is a  transcendental stage  that every person goes through during his or her life. First loves begin, tastes change for things and even new  friendships are forged. Suddenly, going out to play is not so important and other activities take centre stage. However, it is a  path  that should be  traveled dignitically  as an  inalienable right  . Thus, a boy's greatest concerns would have to be rooted in  healthy growing and learning . But we know that  we do not live in a linear world  and that sometimes we are presented with  harsh  circumstances that  put us to the test  . This is the  story of   Guadalupe  and the  overcoming struggle  that is going on.

The young woman lived in a borrowed house that was  razed by fire  in August  2019  . There, he was installed with his family in the rural area of  Cuchilla , Esquina department, in  Corrientes . The only fate that ran that day was to have found them far from the place, so they were  not injured . On the other hand, they did suffer material losses with great emotional value  that ended up in ashes. Since then, he has been in an  abandoned shed  with his parents and three siblings. The space has ground floor with walls and veneer ceiling. However, such  coldness  can not with the  engine of wanting a better future  .  Although indifference tires.

Those who know Guadalupe define her as a  beautiful person, who helps a lot in their home and possesses a responsible spirit . Her smile and good mood spread to those around her. While the desire to get ahead inspire more than one. And how can we not do it? If with great difficulties and with little means to study  he managed to finish elementary school and graduate . In addition, she did it with  excellent notes  and ended up being the  standard-bearer  of the institution.

His  kindness and strength  are easy to detect if you look at his  dad  . The man got land in the same locality, so several months ago they  began to build a house from scratch . However, the illusion fell to the background with the advent of the pandemic and its precarious economic situation. It's just that the little money they had had come from changas and they had to use it to survive.Therefore, the work was  interrupted indefinitely  because they could not continue to purchase materials. They only got to raise a few rows of brick, but most elements are missing, such as sand, spouts or openings.

Solidarity campaign for a different future

We should all have access to decent living conditions, starting with  housing . The  history  of the Sadleir family immediately moved  Martín Andreo , a 52-year-old Buenos Aires lawyer. Nobody had to tell him about the case, but he saw it with his own eyes. He met the girl because some years ago he is the  godfather  of two  rural schools in Corrientes  , one is his. And he  identified himself  with what happened, since he also lost what he had in the past. That's why he  decided to help them  and, together with the  SAUN Foundation,  they started a  campaign to get 500,000 pesos  . The amount was not stipulated randomly, but is the product of the budget provided by several architects.

The  primary objective  is that both the young woman and her parents and siblings can be  replenished   and resting under their own roof  . One that gives them comfort, well-being and safety. Like every inhabitant of the country should have it. In this way, Guadalupe will have the necessary to continue studying  high school  and become a  biology teacher  , his  great longing  .