He is a number 1 fan of Messi and Barça. Sister Lucia Caram evangelizes on Twitter, and continues her great mission, that of fighting for children's rights. 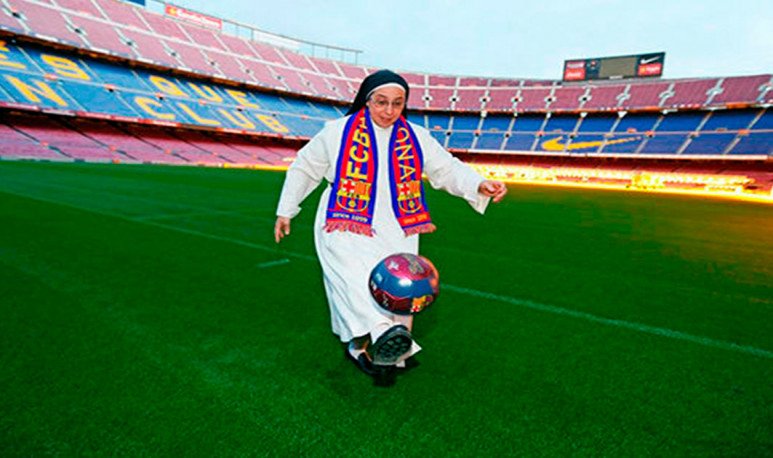 Sister Lucía Caram  was born in  Tucumán  on October 21, 1966, and currently lives in Barcelona. She is recognized in Spain for her great humanitarian work and, moreover, because, according to her, she listers to Pope Francis “with making a mess.” That mess has to do with making inequality visible and doing something to change it, and it works constantly for it. Many also talk about it, of being a nun who breaks with everything we can imagine under the line of dogma, for example, does not pray every day, prefers to go out and feed thousands of families in Manresa, and those who criticize about the long lines of poor people to receive food, the nun  Tucumana  leaves them a strong message because, without hairs on their tongue, he sends them “to the crap.”

Lucia Caram  is a fan of  Messi  and Barça. “My football passion comes from childhood as a good Argentinian. I had a parenthesis in my training stage in the novitiate, when I arrived in Barcelona 25 years ago my sympathy for Barça grew,” Tucumana told the press last year. 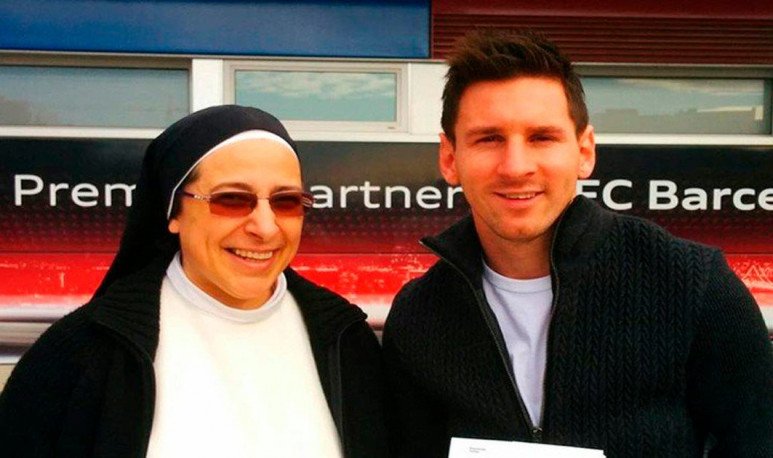 As time passed, Sor Lucía began to become more internalized in  football - Since 2016 she has been part of the Barcelona Board of Trustees, and a few years ago she said: “I proposed the challenge of fight against child poverty and I told them about La Masia (club quarry) as the place where the best players in the world like Messi are formed, and my concern for the great farmhouse that was in the country of child poverty. They are children who cannot play headlines in the game of life,” he said.

The religious knows the Messi family. “I know personally Lio, his father Jorge and his brother Rodrigo .  The first times I talked to Lionel was very monosyllabic. Now much more is explained, it has matured a lot. It is a delight to see him play, I share his passion for football because it is art,” he emphasized about it.

“ With you to death”

After Messi's statements that gave him to speak after the two matches of the Argentine National Team at the Copa America last year, where the national team captain pointed out corruption, arbitration and the VAR system, Sor Lucia  could not restrain himself and went out to support his favorite player in a video that soon became viralized.

“I followed the Copa de América a little bit and I just want to express my support for Leo Messi. Looks like they got into him. As always, he has given his best and he has spoken clearly: corruption, manipulation, very arbitrary arbitrations, penalties not seen, not wanting to review the VAR and then this absolutely unfair colored card. All my support Leo. You continue to play football, do not enter into the perverse dynamics of those who have wanted to corrupt what is sport, football and good doing. You're still the best player in the world. A hug Lio, with you until death,” he emphasized from the Convent of Santa Clara de Manresa, in Barcelona.

“ A contemplative, restless and disturbing nun”

In this way,  Sister Lucia Caram  is described in her personal Twitter account, which currently has 202.9 thousand followers. His tweets generate surprise and laughter. He once said, “Jesus was the first tweet in history,” as he also has no problem in defining himself as a nun “militant of the MEC: the party of those who move the ass.”

Tucumana is very active in networks, evangelizes through them as a new way of being closer to people. “I talked about how to evangelize in the networks and I said it was not to recite a sermon, but to give good news. And that, in the face of such poverty and injustice, the Christian must always bow to the weakest. I remembered that, as a girl, my mom had given me a picture that said, 'Put your brain into operation before the tongue in motion. ' And, well, something like that happened. Of course I sometimes pack and develop a certain digital incontinence,” he said.

As all Argentina has deep-rooted expressions typical of our country, for example those who say they help people in street situations, she prefers to use the statement “We help people who are on the bloody street”. While she has already been suggested to moderate her vocabulary, she responds: “If I do, it wouldn't be me.”

In Spain they call her in many ways, and one of them is “The Cojonera Nun”, and on this he commented that the pope gave the order to make a mess, and she complies. “In confidence, when you talk to a friend about me, she calls me the nun 'quilombera'. When we introduced the programme to combat child poverty, there were many people who did not agree that a religious should be directly engaged in social action and he invited us to Rome. We went with 200 volunteers and the vice president of Barça and gave him a shirt with the legend Invulnerable. It's not like I talk to Francis every day, but I've seen myself a few times and I have a lot of friends in common. He keeps encouraging me to make a mess, although it seems that sometimes I do too much,” he said in a ricky tone.

Sister Lucia Caram  tries to make felces to others, as she also describes it in her Twitter account, and her great mission, that of every day, is to fight for children's rights. On the other hand, it follows football closely like any other fan of this sport, which awakens passions anywhere in the world. In this sense, the fanatic N°1 de Messi who carries out a foundation, where more than 5000 families depend on it, it is not easy for her to reconcile her life of prayer and monastic together with football but argues that “sometimes you have to give time for everything”.