Beautiful story of a Santafesina heroine of teaching voation: the teacher caracol. 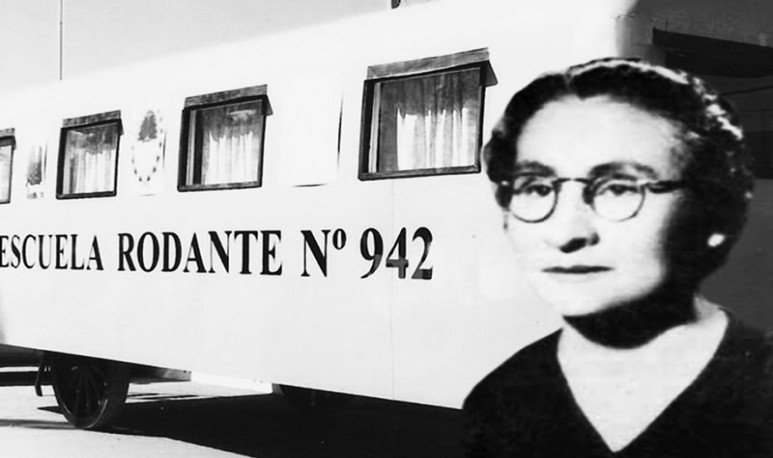 Providencia is a small town in the interior of Santa Fe. With less than a thousand inhabitants, it is separated about 70 kilometers from Esperanza. Providencia is also the place where Angela Peralta Pino was born on November 9, 1909 .For 22 years, this woman taught in the department 9 de Julio in a train wagon  dragged from one place to another by tractors. It was this that earned him the title of “teacher caracol”, whose Mobile Rural School had No. 942.

The teacher caracol began her teaching studies in the city of  Rafaela , but was unable to complete them. However, her unwavering vocation to teach led her to the most inhospitable places in the north of Santa Fe. There he began to teach children and adults in the stays.  A teacher who fought illiteracy among the quebrachales.

The caracol teacher, as she herself said, allowed “the benefits of school to the interior of the mountains”.

In his adolescence, despite his family's opposition, he went to Rafaela to study. It was in La Perla del Oeste that he enrolled in the teaching career, in the Normal School “Domingo de  Oro ”. But, after studying the first year, for family reasons, Angela was forced to drop out of school. I was just starting the second. Perhaps this is your first great renunciation for the benefit of family harmony. However,  when visiting an important stay in the apartment 9 de Julio, he was asked to start teaching the children of pawns . It was so that he began in teaching work. Work in which the master snail will stand out for her passion and dedication, especially with the most needy.

The value of the rural teacher

Angelita's tour and her rolling school lasted 22 years. His school was abandoned for many. In 1982 it was rescued and converted into a museum. Since then, it is located at the entrance to the city of  Tostado .

The teacher snail  had the virtue of recording in photos her pedagogical experience . Photographer Fernando Raber tells, in a book by the guild Amsafé, that he learned what he needed to use a camera from that experience and the places he toured. She says there are  250 photos gathered by the teacher . A large part of these images the photographer gathered them in a chapter of his book. Raber received in 1989, as a legacy of Aneglita, a fair number of negatives in which he immediately recognizes the documentary value they have.

What can we rescue for our days from the life of this master snail?

In the province of Santa Fe, the first schools to return to presence, in times of pandemic, were rural.In mid-October,  56 schools in the north and provincial center recovered face-to-face classes postponed by the coronavirus . One perceives the strong commitment these rural schools and their teachers have to education.

Distance greatly affected education in these places, given the lack of resources for students to attend  virtual classes . However, teachers managed to take home-for-home homework. As it was, they agreed with families to deliver booklets and photocopied materials to guarantee them learning and sustain the necessary ties.

A tribute to the teacher caracol  is to honor someone who was a bastion for teaching rura l. Imitating their actions, anonymous teachers of rurality have built schools. They have made it possible for children from the most remote places to continue learning.